Amongst the documents that emerged from the Council’s debates, the Decree Perfectae Caritatis, approved by the Council itself, and the later Instruction Renovationis Causam set out the way forward for the consecrated life, emphasizing the original values of each charism and each religious family. The post-conciliar renewal of the Constitutions of the Order of Augustinian Recollects is a good indication of this process. 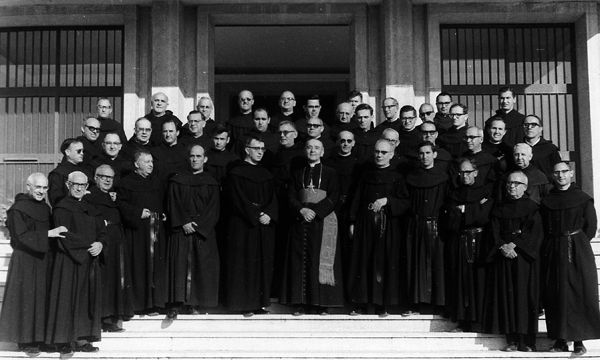 The Order was living somewhat disconnected from its early history; for this reason, the special General Chapter of 1968, celebrated in Rome, faced up to the enormous task of laying out the original foundations of the charism – in particular, St Augustine and the Forma de Vivir – incorporating them into the Constitutions. The exclusively juridical character of the former Constitutions was replaced by legislation based on the charismatic elements. A new stage of life was underway. 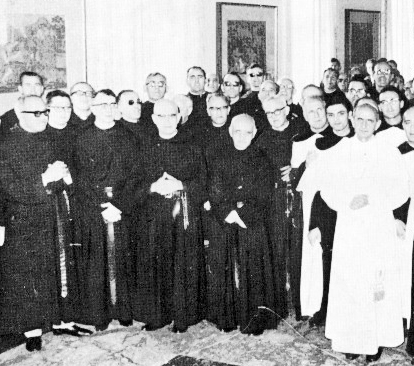 General Chapter, 1968.
All of this brought with it an attempt to live the consecrated life according to the Gospel and our foundational charism. It was also essential to deal with the changes demanded by the rapid evolution of society. In order to prepare the religious for all this, means of formation such as courses of renewal, chapters of renewal, formation weeks, etc. were arranged.
The Post-conciliar Crisis
index The Beginnings First years Spreading and defining The triumph of stagnation The Recollection in the Americas Between war and revolutions Destination America Full juridical autonomy Expansion throughout Spain The Province of St Nicholas of Tolentino Gestation and birth Initial fervour and enthusiasm, 1606-1666 Routine and the weakening of self-identity, 1666-1790 Triumph of pastoral individualism, 1790-1898 From exhaustion to flourishing, 1898-1965 From 1965 to the present day: in harmony with the feelings of Church and society Institutional renewal The Post-conciliar Crisis The visible results of the Council’s renewal in the service of the People of God The internal life of the Province, communities, and the religious, in the light of post-conciliar events The Order of Augustinian Recollects restructured Nicholas of Tolentino, our patron saint