In 1898 the Order’s sole possessions in Spain were the residence of the General curia in Madrid and three colleges dedicated to the formation of its Religious. In 1899 the Order established itself in Granada, Motril and Puente la Reina. Between 1902 and 1908 it further established itself in Sos del Rey Católico, Lucena, Falces, Sigϋenza, Zaragoza and Berlanga de Duero. Between 1912 and 1954 another 18 houses were opened, but, with the exception of Badalona and Chiclana de la Frontera, only the seven destined to become seminaries were consolidated: Monachil, Lodosa, Ágreda, Artieda, San Sebastián, Martutene and Fuenterrabía. 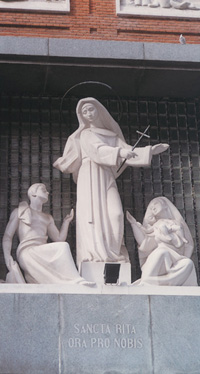 From 1931 to 1939 the Order suffered a veritable persecution which forced it to close some of its houses. In the same persecution eight of its Religious were assassinated. Seven of these, pertaining to the community of Motril, have recently been beatified.

The actual presence of the Order in Spain has become solidly forged in the second half of this century. In 1959 it inaugurated a great Church in Madrid. In the following years there arose monasteries, parishes, colleges and university residences in Madrid, Granada, Salamanca, Valladolid, San Sebastián, Valencia, Zaragoza and other smaller cities.

In response to Pius XI’s appeal for missionaries, the Order increased its presence in the old missions of the Philippines and Colombia and opened four new territories in China (1923), Brazil (1925 & 1928) and Colombia (1927).

As 1925 approached, the interest in indigenous vocations increased. Years later, stimulated by the increasing educational needs of the society, the Order officially entered the field of learning. Between 1941 and 1966 it founded colleges in The Philippines, Venezuela, Brazil, Colombia, Argentina, Spain, Panama, The United States etc.

The Order currently holds two universities, three colleges at university level, and in the region of thirty colleges of primary and secondary stage   education. In these centres of learning, some 200 Religious attend to more than 70,000 youngsters.  These new tasks did not compromise their former missionary vocation. Between 1963 and 1966 the Order installed itself in Taiwan and assumed the Prelatures of Chota (Peru), Bocas del Toro (Panama), and Ciudad Madera (Mexico). In December of 1986 they entered the continent of Africa for the first time - sending a group of five missionaries to Sierra Leone.


Gestation and birth
index The Beginnings First years Spreading and defining The triumph of stagnation The Recollection in the Americas Between war and revolutions Destination America Full juridical autonomy Expansion throughout Spain The Province of St Nicholas of Tolentino Gestation and birth Initial fervour and enthusiasm, 1606-1666 Routine and the weakening of self-identity, 1666-1790 Triumph of pastoral individualism, 1790-1898 From exhaustion to flourishing, 1898-1965 From 1965 to the present day: in harmony with the feelings of Church and society Institutional renewal The Post-conciliar Crisis The visible results of the Council’s renewal in the service of the People of God The internal life of the Province, communities, and the religious, in the light of post-conciliar events The Order of Augustinian Recollects restructured Nicholas of Tolentino, our patron saint