In 1621, the pontifical sanction that they had been yearning for arrived. By means of the Papal brief militantis Ecclesiae Gregory XI elevated the Province to the rank of Congregation and commended its government to a Vicar General. In the last days of November of the same year the General chapter of the new Congregation -sitting in Madrid– elected their first Vicar and divided themselves into four Provinces. The first three, located in Spain, would have a prevalently contemplative physiognomy. The fourth, of missionary character, would comprise of the convents and missions of the Philippines. 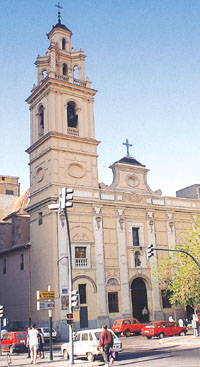 The Congregation continued to fall under the jurisdiction of the General of the Augustinians, but the presence in the Congregation of a Superior supra-provincial, who visited his communities regularly and acted as ‘appeal-judge’, eroded his authority to such a point that it became obscured completely from the day to day life of his Religious. The urgency to fortify their identity and to pass it on to their successors moved them to adapt their legislation to the spirit of the Forma de Vivir and to cultivate their own story.

The fruits of these aspirations were the redaction of the new constitutional and liturgical texts; the composition of a manual which would serve them as a guide through the challenging ground of mental prayer, and, the publication of the first history of the Recollection. Between 1621 and 1664 there appeared three editions of the Constitutions (1630, 1637, 1664), two of the ceremonial (1621 & 1664), two of the ritual (1639 & 1650), a commentary on the rule of St, Augustine (1656), a collection of pontifical documents referring to the Congregation (1664), the first volume of its General History (1664), and the Mystical Theology (1664).

Throughout these same years the Recollects were contemplating their material structure. In 1621, upon acquiring the category of Religious Congregation, almost all of the communities were installed in provisional lodgings, which were small, regularly unhealthy and inadequate. In the following decades almost all achieved their own defining features, which they conserved intact until their disappearance in 1835. A large part of these buildings were the work of Frater Juan de la Virgen de la O (1565-1645) and of his son Father Lorenzo de San Nicolás (1593-1679), one of the best Spanish architects of the time.


The triumph of stagnation
index The Beginnings First years Spreading and defining The triumph of stagnation The Recollection in the Americas Between war and revolutions Destination America Full juridical autonomy Expansion throughout Spain The Province of St Nicholas of Tolentino Gestation and birth Initial fervour and enthusiasm, 1606-1666 Routine and the weakening of self-identity, 1666-1790 Triumph of pastoral individualism, 1790-1898 From exhaustion to flourishing, 1898-1965 From 1965 to the present day: in harmony with the feelings of Church and society Institutional renewal The Post-conciliar Crisis The visible results of the Council’s renewal in the service of the People of God The internal life of the Province, communities, and the religious, in the light of post-conciliar events The Order of Augustinian Recollects restructured Nicholas of Tolentino, our patron saint