As befits a man of his time, (354-430 B.C.E.), Saint Augustine did not have a globe of the world nor did he know anything about the world beyond the frontiers of the Roman Empire. Nonetheless, he talks of the mission as one of the fundamental truths of the faith in the Trinity. In the 4th-5th Centuries B.C.E. all Christians were convinced that the faith was present in practically all parts of the world. For this reason there were no “missionaries” as we now understand the term as people who went beyond the frontiers of the known world to announce Jesus Christ. 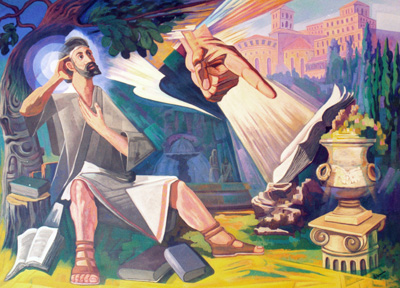 The Saint´s vision of the missions was very similar to what was suggested by the Second Vatican Council: the missions within the concept of God the Father, the Son and the Holy Spirit make the Church missionary. This gives to every person (of whatever race or condition) the same dignity, and the same rights. One of Augustine´s writings makes memory of Adam´s name (the first human and representative of all humanity) which contains four letters which in Greek are the initials of the four points of the compass, in which “everyone is called together in the same calling” (commentary on Psalm 95).

At a time when doctrines tended towards a certain hardening of positions, when it was almost natural to use violence as a way to defend ideas and beliefs, Augustine took a posture of openness and mercy. He opened up dialogue with dissidents, travelled, held discussions in public and private, by letter and in conferences, searching for solutions based on concord and communion. He also openly condemned those who used violence as a defence of their faith.

He encouraged others to bring the message of love of God to all races, tongues, and cultures: ”we know that the Church has arrived already to western shores, and has to arrive, fructifying and growing, to the shores where it has not yet been able to reach”, he writes in his Letter 199.

He never permitted that his monks would close themselves in seclusion and not heard the voice of their neighbours who suffered from religious and social necessity. He always asked that his minks would establish a balance between, seclusion, contemplation, love and action.

The monasteries which he and his followers founded were never closed to reality; they embraced contact with the people, and gave witness against all types of injustice, discrimination and violence. But it was to be violence itself that will ruin the dream. His monasteries were swept away in the fall of the Roman Empire. But not his ideas, his way of life, his suggestions, which have stayed on forever in the Church and awoke with great force some centuries later.

Cultivating the missionary spirit
index Introduction Missionaries out of necessity Mission, a complex and all-embracing term Religious, lay people, and volunteer missionaries Missionaries according to the laws Constitutions of the Order of Augustinian Recollects Statutes of the Missions Missionaries by inheritance St Augustine Cultivating the missionary spirit The Augustinian Recollection, missionary right from the start The three stages of the Augustinian Recollect missions The Philippines, “surname” of the province of St Nicholas Japan, seed-bed of martyrs The Province’s missions in the 19th century The missions save the Order Spreading out throughout the world (1896-1906) St Ezequiel Moreno The Province’s missions in the 20th century Introduction The Philippines in the 20th century Prelature of Ciudad Madera (Chihuahua, Mexico) Sarapiqui (Costa Rica) Kamabai and Kamalo (Northern Province, Sierra Leone) Kaohsiung (Taiwan) Missionaries today MISSIONARY ZONES Prelature of Labrea (Amazonas, Brazil) History of the Purus Physical description of the region Social geography Evangelization Diocese of Shangqiu (Henan, People’s Republic of China) Historical background to the Augustinian Recollects in China Shanghai Preparation (1919-1923) Geography, economy, and society of the Kweiteh mission The first stage (1924-1930) The second stage (1931-1937) The third stage (1938-1952) The fourth stage: beyond the bamboo curtain MISSIONARY MINISTRIES Boy's Town (Aguascalientes de Cartago, Costa Rica) St Monica’s home (Fortaleza, Ceará, Brazil) CARDI, the Augustinian Recollect Centre for Integral Development, Mexico DF Service to immigrants Latin-American Chaplaincy, London The Chinese chaplaincy in the Archdiocese of Madrid