The first superior of Kweiteh was the vice procurator of Shanghai de Shanghai, Francisco Javier Ochoa. He arrived on the 16th of February 1924 to prepare the residence, rent a property and advise so that the rest of the missionaries would get under way. By the middle of March he opened an English school to get to know the population and educate the young people. The other missionaries leave Manila on the 11th of March and arrive to Kweiteh on the 4th of April. All of them have two years or less ordained. They start to learn Chinese, to take on the customs and to get to know their surroundings. 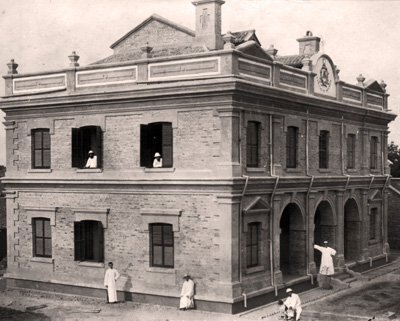 The construction of the mission house allowed the religious to have a central place of operations, to relax, for formation and meeting.

In September 1924 there were now ten Augustinian Recollects and they were present in five cities in the mission. They were established within the inner wall of Kweiteh and opened their house on the 7th of July 1925. They also opened the Holy Infancy to gather in young girls abandoned in their houses.

But when the future seemed bright and promising, internal disturbances in the nation put everything in danger. In 1927 civil war broke out. The friars received an explicit order to go regress immediately to Shanghai. But the lack of unity in the foreign nations put a brake on the xenophobic feelings and calmed the general situation down. The Recollects saw the urgency to promote the mission. In July 1928 the magazine Todos Misioneros (All missionaries) came out. The composition resided firstly in Manila (the Philippines), later in Shanghai, and lastly in Marcilla (Spain). It was one of the most popular publications in the history of the Order.

In the middle of this atmosphere of conflict and bloodshed, Pope Pius XI founded the apostolic prefecture of Kweiteh. On the 8th of January 1929 they named Ochoa as apostolic prefect and Mariano Alegría pro-prefect.

The second stage (1931-1937)
index Introduction Missionaries out of necessity Mission, a complex and all-embracing term Religious, lay people, and volunteer missionaries Missionaries according to the laws Constitutions of the Order of Augustinian Recollects Statutes of the Missions Missionaries by inheritance St Augustine Cultivating the missionary spirit The Augustinian Recollection, missionary right from the start The three stages of the Augustinian Recollect missions The Philippines, “surname” of the province of St Nicholas Japan, seed-bed of martyrs The Province’s missions in the 19th century The missions save the Order Spreading out throughout the world (1896-1906) St Ezequiel Moreno The Province’s missions in the 20th century Introduction The Philippines in the 20th century Prelature of Ciudad Madera (Chihuahua, Mexico) Sarapiqui (Costa Rica) Kamabai and Kamalo (Northern Province, Sierra Leone) Kaohsiung (Taiwan) Missionaries today MISSIONARY ZONES Prelature of Labrea (Amazonas, Brazil) History of the Purus Physical description of the region Social geography Evangelization Diocese of Shangqiu (Henan, People’s Republic of China) Historical background to the Augustinian Recollects in China Shanghai Preparation (1919-1923) Geography, economy, and society of the Kweiteh mission The first stage (1924-1930) The second stage (1931-1937) The third stage (1938-1952) The fourth stage: beyond the bamboo curtain MISSIONARY MINISTRIES Boy's Town (Aguascalientes de Cartago, Costa Rica) St Monica’s home (Fortaleza, Ceará, Brazil) CARDI, the Augustinian Recollect Centre for Integral Development, Mexico DF Service to immigrants Latin-American Chaplaincy, London The Chinese chaplaincy in the Archdiocese of Madrid