In February 1963, the prior provincial of the Province of Saint Nicholas of Tolentino, Moisés Arguijo, had an interview with Joseph Cheng, a Dominican friar and Bishop of Kaohsiung (Taiwan). This Bishop had had close contact with various Augustinian Recollects classmates in his time as a student in Hong Kong. 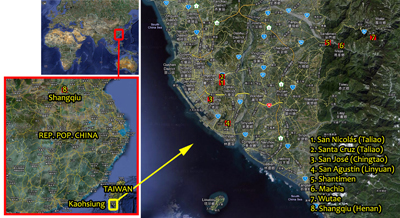 Map of the situation of the communities in Taiwan; in the lower left box its situation in regard to the mission in Shangqiu in Henan (the Popular Republic of China). On the right, seven of the ministries of the Recollects in Taiwan, four in the urban region of Kaohsiung and three in the mountainous native region.

The Province of Saint Nicholas of Tolentino looked for a platform in order to communicate with the religious who had stayed in the Popular Republic of China after the deportation of foreigners and the imposition of the Communist regime. The foundation of Taiwan permitted the maintenance personnel with knowledge of the Mandarin in case the frontiers of the continent were reopened.

The interview and the union of interests provoked a rapid outcome. On the 4th of June 1963 two Chinese Recollects left Madrid for Kaohsiung, who were followed by two Spanish Recollects the following week. In the moment of maximum expansion, at the beginning of 1998, there were up to nine Recollects from various parts: four Chinese, three Spaniards and two Filipinos. 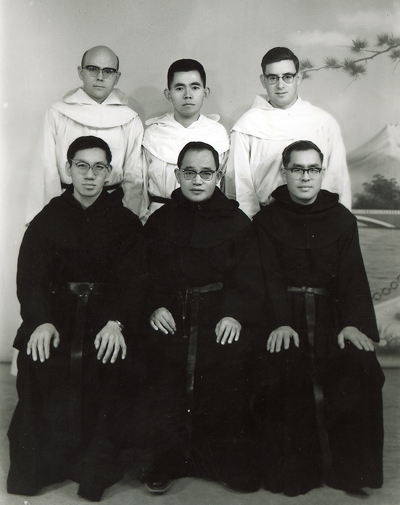 The first Recollect community in Taiwan: standing, in white habits, from left to right Manuel María Piérola, Benito Suen and Jesús Antonio Lasheras; sitting in black habit Felipe Liu, Pedro Tung and Melecio Ho.
In the first stage were the pioneers. Two Chinese Recollects were assigned to Fengshan, where as well as helping out in pastoral activities started to study minan, in different dialect from the continental Mandarin. The two Spaniards were sent to learn Mandarin in a community of Jesuits in Hsinchu, some eighty kilometers from Taipei. When the language no longer presented a problem, the Augustinian Recollects took charge of four parishes in the urban area of Kaohsiung.

Taliao had in 1960 little more than 40,000 inhabitants, half of them farmers. Their parish of Holy Cross was broken in two, thus creating that of Saint Nicholas of Tolentino, in time the Centre of the Recollect mission.

The Parish of Holy Cross was founded in 1957 by Dominican friars. When the Province of Saint Nicholas of Tolentino took charge of it (1965) it was very abandoned. In 1971 they restored the chapel, substituted in 1981 for a wider one; in 1989 they built a new parish residence; and between 1973 and 1977 they mended the nursery for children to which was added in 1989 the old parish residence.

In December 1963, in the recently created new parish of Saint Nicholas, the missionaries put down the cement of the new complex which they opened on the 15th of May 1965. The Church measured 26 x 11 meters and could accommodate some 300 people. In 1966 they opened a nursery school and in 1990 a new house. 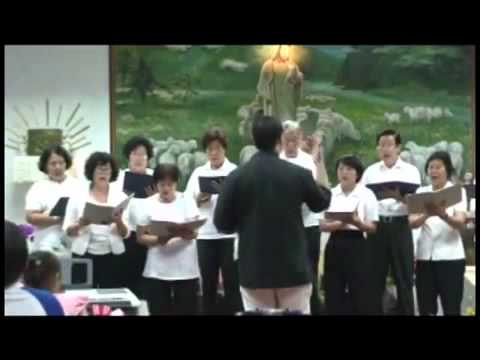 The pastoral works and the education of small children has been united for many years to the Recollect missionaries in Taiwan.
The parish of Saint Augustine in Linyuan was founded by the Recollects in 1964. It is in the area of an industrial complex of large petrochemical companies. The greater part of the population were Buddhist and the religious were always had their hands tied in acting in social problems as they had little room for action in a country with strong restrictions on foreigners. In Linyuan they started to attend to Filipino immigrants by Recollects of the same nationality and language.

The Parish of Saint Joseph is situated in Chinang Li, Hsiaokang, and some nine kilometers from the centre of Kaohsiung. It was given over to the Order in 1970 and the greater part of the inhabitants are immigrants from the provincial continent of Shantung.

The Recollects in the urban region of Kaohsiung impart catechesis and have founded faith groups. They collaborate with the formation in the diocesan seminary with the Contemplative Dominican friars and give classes in military academies, in the University of Cheng Shan, in the college Wen-Tzao of Philosophy and Letters and in the Academy of Marine Society. Lastly, they act as translators of classical Spanish literature and religious documents to Chinese.

One of the places of action, and also of unease, was that of the nursery school to satisfy the necessities of the mission and ease the contact with families. Nevertheless, the law always forbids pastoral work through the prohibition of religious teaching, and they have also strangled their economic development.

In 1990 two important changes occurred. For one part, the Province of Saint Nicholas built a new central house in Taliao, next to Saint Nicholas, to ease the meetings of missionaries. Also, keen to strengthen their presence in the island they widened their radio of action. On the 31st of December they took charge of three native districts in Wu-Tai and Machia-Hsiang.

Less than 2% of the total population of Taiwan belongs to nine main indigenous tribes. About half of them live in the steep mountains in the centre of the island, and the other half have integrated themselves into the rest of the society.

The Recollects took charge of this mission previously attended to by Dominican friars. In the municipal of Wu-tai 79% of the surface is forest. It is in the central mountain range with heights of 1,000 meters and an average temperature of 17.8ºC. Fog is very frequent and gives its name to the zone: Wu means fog; and Tai high place. The Province also has taken on the nearby parish of Machia Hsiang, with 5.000 inhabitants.

The natives of the zone belong to the paiwan group, with similar features to Filipinos and their dialects are also affined with that of tagalog. The majority have converted to Christianity, and some 20% are Catholics.

Departure of the Province of Saint Nicholas of Tolentino from Taiwan 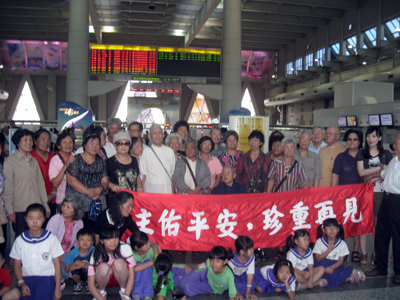 
Prelature of Labrea (Amazonas, Brazil)
index Introduction Missionaries out of necessity Mission, a complex and all-embracing term Religious, lay people, and volunteer missionaries Missionaries according to the laws Constitutions of the Order of Augustinian Recollects Statutes of the Missions Missionaries by inheritance St Augustine Cultivating the missionary spirit The Augustinian Recollection, missionary right from the start The three stages of the Augustinian Recollect missions The Philippines, “surname” of the province of St Nicholas Japan, seed-bed of martyrs The Province’s missions in the 19th century The missions save the Order Spreading out throughout the world (1896-1906) St Ezequiel Moreno The Province’s missions in the 20th century Introduction The Philippines in the 20th century Prelature of Ciudad Madera (Chihuahua, Mexico) Sarapiqui (Costa Rica) Kamabai and Kamalo (Northern Province, Sierra Leone) Kaohsiung (Taiwan) Missionaries today MISSIONARY ZONES Prelature of Labrea (Amazonas, Brazil) History of the Purus Physical description of the region Social geography Evangelization Diocese of Shangqiu (Henan, People’s Republic of China) Historical background to the Augustinian Recollects in China Shanghai Preparation (1919-1923) Geography, economy, and society of the Kweiteh mission The first stage (1924-1930) The second stage (1931-1937) The third stage (1938-1952) The fourth stage: beyond the bamboo curtain MISSIONARY MINISTRIES Boy's Town (Aguascalientes de Cartago, Costa Rica) St Monica’s home (Fortaleza, Ceará, Brazil) CARDI, the Augustinian Recollect Centre for Integral Development, Mexico DF Service to immigrants Latin-American Chaplaincy, London The Chinese chaplaincy in the Archdiocese of Madrid