Sierra Leone is one of the living missions of the Order of the Augustinian Recollects. Although it was opened by the Province of Saint Nicholas of Tolentino, since 1998 its upkeep depends on the Province of Saint Ezekiel Moreno although there is still a close collaboration in human and economic resources and development projects. 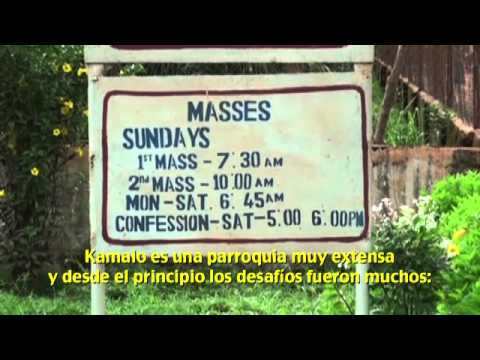 The Catholic Church was one of the last religious institutions to arrive in the Northern region of Sierra Leone. In the sixtieth celebration of the Parish of Kamalo this video remembers what the missionaries have done during these six decades in the society of Sierra Leone.
The arrival of the Augustinian Recollects to Sierra Leone has a long history. In an Act of the Provincial Council on the 7th of December 1990 appeared for the first time the possibility of an American mission. The Prior Provincial informed them of an interview held with Giorgio Biguzzi, the Bishop of Makeni, in Sierra Leone. Biguzzi, after seeing the presence of the Augustinian Recollect Sisters of the Philippines in Yele, wrote to the Provincial inviting him to open communities in his diocese.

The idea of the founding mission in Africa was unheard of. Two circumstances prepared the land: the presence of the Filipino missionaries belonging to the Augustinian Recollect Family; and the general idea that the Vicariate of the Philippines would become an independent Province. The new province needed a missionary territory and Sierra Leone offered an unexplored area in a difficult continent and with possibilities of work for a new English speaking religious community.

Nonetheless some difficulties delayed the foundation. On the 3rd of September 1991 the Prior Provincial indicated to Biguzzi that it was not possible to attend to his request because of the lack of personnel and the pronounced dispersion of ministries in the Province which would only be aggravated by opening communities in a place so far away and isolated from the others.

In the 1994 Provincial Chapter the issue came out again for debate. The prior general informed that the Congregation for the Propagation of the Faith, in charge of the funding for Catholic missions, could propose to the Order a foundation in Africa. Also, various African Bishops had got in contact with the General Curia to ask for foundations by the Recollects. The Chapter pronounced that “the Province would be open to the possibility of new foundations that the Church would entrust to us, taking into account our missionary charisma and the personnel which the Province has at its disposal”.

In 1994 the Holy See directly asked that the General Curia in Rome of the Augustinian Recollects take into account Biguzzi´s petition. The General Curia passed on the petition to the Province of Saint Nicholas for being the province that had the most people, with ministries in English-speaking countries and because of the new Filipino Province.

From the 26th of October 1994 until the 29th of December 1996, the date of the arrival of the Recollects in Africa, there arose deliberations by the Provincial Council, a petition for more information from Biguzzi, a trip by one of the councillors and the secretary of the Province to Sierra Leone and the election of five religious that would make up the community chosen from among the ten volunteers.

The Recollects took charge of the parish of Kamabai, in the Northern Province, the district of Bombali, the capital of the Biriwa region. The community received a new impulse with the arrival of new religious and the visit of the Prior Provincial, even in the context of the Civil War which the country was going through.

The Civil War of Sierra Leone started on the 23rd of March 1991, when The Revolutionary United Front (RUF) supported by the dictator Charles Taylor took the South and East of the country, a zone rich in diamonds. A large part of the population supported them given the lack of government, high corruption, general misery and the existence of a huge number of children and adolescents who had nothing to use united themselves to the rebels and trusting in their promises.

In April 1992 there was coup d´état, and in 1993 the situation complicated itself once the army itself dedicated itself to pillage and the abuse of the civil population because of the lack of wages and their supposed profits. The people also equally suffered the outrages of the army and the resurgence of local self-protection groups. That of Kamabai would have a fundamental job helping the religious to escape.

From March 1995 onwards mercenary South Africans operated in the country that expulsed the RUF they restored the civil government and they signed the Abiyán Peace Agreement. The UN obliged the new government to break its contract with the mercenaries. It is in the interval of peace that the Recollects arrive. But in 1997 the situation complicated itself with new protagonists: more cruelty in the regular army, paramilitary rebel groups (kamajor), with all entering into a dynamic of violence and destruction which caught the attention of the newspaper headlines and television of the whole world. The missionaries, in the middle of a tense situation, and continue as well as they can their work.

In May 1997 a large part of the army directed by Johnny Paul Koroma took part in a coup d´état, creating the Armed Forces for Revolutionary Council (AFRC), they allied themselves with the RUF and declared war on the civil government. They took the capital Freetown and began a period of great violence, sacking, violations and absolute instability.

The international forces of Western Africa (ECOMOG) retook the capital and expelled the AFRC and the RUF towards the frontiers, in a path in which they spread destruction and death. On Saturday the 14th of February 1998 an Augustinian Recollect is kidnapped in a hospital of the Brothers of Saint John of God in Lunsar along with some volunteers and religious. On the 27th of February they were liberated after arduous negotiations in which Biguzzi and Spanish diplomats took part.

A day after that kidnapping, Sunday the 15th of February, the rebels came to Kamabai and the rest of the Recollects fled in a journey that would last up until their evacuation from the country on the 11th of March 1998. The destruction was almost complete in terms of the infrastructures of the mission. There were only two Recollects left who finally left the country on January the 12th 1999 through the Guinean frontier.

On January the 18th 2002, the democratically elected constitutional president Ahmad Tejan Kabbah declared the civil war as finished after leaving 50,000 dead, millions of displaced, a large number of people with severed limbs, victims of rape, orphans, a bankrupt State, the destruction of the infrastructures and means of production and a leap backward of some thirty years in the economy. They calculate that 1,270 primary schools were completely destroyed.

On the 28th of March 2004 the Augustinian Recollects returned, after an interval of five years and three months. Since then the mission has been managed by the Province of Saint Ezekiel Moreno. In the year 2006 they opened a new community in Kamalo, in the North, a frontier parish with Guinea Conakry. In 2012 there is programmed the opening in Freetown of another support community to the other two missions in the rural interior.

The Augustinian Recollects have left the mark on the country. The Catholic pastoral action is done with energy, great example and drive for all the population without differentiating between age, sex, religion or thinking. Their work in the areas of education, health and infrastructures has been recognized by the local authorities and by the trust deposited in the many private and public donors that have financed the development projects.

Catholicism in Sierra Leone is a minority within another minority, Christianity. The country is for the greater part Muslim, although without signs of fundamentalism. The interreligious coexistence is natural and does not suppose any additional difficulties.

The Catholic population is widely scattered, and it is necessary to cover many kilometres by bad roads in order to find the few Catholics who lack social power. The non-evangelized customs also exercise a strong influence within the same Catholic population: polygamy, a habitual macho treatment in gender relations, gory initiation rites like female circumcision, secret societies, magical rites, animism, child marriages...

Kaohsiung (Taiwan)
index Introduction Missionaries out of necessity Mission, a complex and all-embracing term Religious, lay people, and volunteer missionaries Missionaries according to the laws Constitutions of the Order of Augustinian Recollects Statutes of the Missions Missionaries by inheritance St Augustine Cultivating the missionary spirit The Augustinian Recollection, missionary right from the start The three stages of the Augustinian Recollect missions The Philippines, “surname” of the province of St Nicholas Japan, seed-bed of martyrs The Province’s missions in the 19th century The missions save the Order Spreading out throughout the world (1896-1906) St Ezequiel Moreno The Province’s missions in the 20th century Introduction The Philippines in the 20th century Prelature of Ciudad Madera (Chihuahua, Mexico) Sarapiqui (Costa Rica) Kamabai and Kamalo (Northern Province, Sierra Leone) Kaohsiung (Taiwan) Missionaries today MISSIONARY ZONES Prelature of Labrea (Amazonas, Brazil) History of the Purus Physical description of the region Social geography Evangelization Diocese of Shangqiu (Henan, People’s Republic of China) Historical background to the Augustinian Recollects in China Shanghai Preparation (1919-1923) Geography, economy, and society of the Kweiteh mission The first stage (1924-1930) The second stage (1931-1937) The third stage (1938-1952) The fourth stage: beyond the bamboo curtain MISSIONARY MINISTRIES Boy's Town (Aguascalientes de Cartago, Costa Rica) St Monica’s home (Fortaleza, Ceará, Brazil) CARDI, the Augustinian Recollect Centre for Integral Development, Mexico DF Service to immigrants Latin-American Chaplaincy, London The Chinese chaplaincy in the Archdiocese of Madrid