The opening of new fields for evangelization without the dependence of governments brought about an authentic missionary expansion throughout the 20th Century that took the Province of Saint Nicholas of Tolentino to places which they had never thought of going.

Present division of the Provinces of the Order of the Augustinian Recollects.

At first, the religious directed themselves towards inhospitable zones lacking clergy. There were religious in Chepo and Darién (Panama), on the Columbian Coast of the Pacific, in the Brazilian states of Bahía and Pará or in the Venezuelan Guyana. They were places of unhealthy climates, humid, insanitary, and endemic in malaria and yellow fever. Many religious lost their lives and good health in these places.

The arrival of Pius XI to the papacy in 1922 gave a general impulse to all the missions in the Church. The Recollects were associated with the epic Chinese mission (1924) and in the prefectures of Tumaco (1927) in Columbia and Labrea (1925) and Marajó (1928) in Brazil. 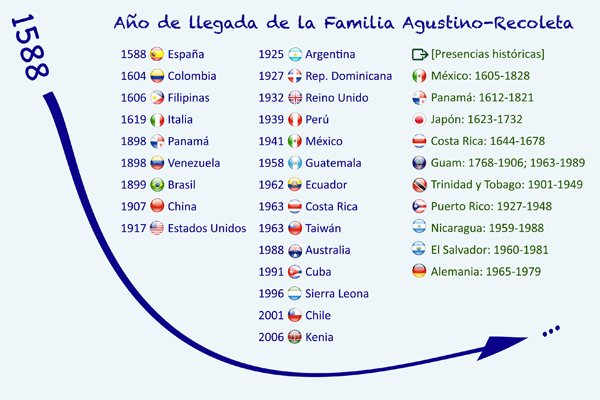 Expansion of the Augustinian Recollect family throughout its history. The image takes into account all the religious orders and congregations born within the same limits of the Order.

The Philippines in the 20th century
index Introduction Missionaries out of necessity Mission, a complex and all-embracing term Religious, lay people, and volunteer missionaries Missionaries according to the laws Constitutions of the Order of Augustinian Recollects Statutes of the Missions Missionaries by inheritance St Augustine Cultivating the missionary spirit The Augustinian Recollection, missionary right from the start The three stages of the Augustinian Recollect missions The Philippines, “surname” of the province of St Nicholas Japan, seed-bed of martyrs The Province’s missions in the 19th century The missions save the Order Spreading out throughout the world (1896-1906) St Ezequiel Moreno The Province’s missions in the 20th century Introduction The Philippines in the 20th century Prelature of Ciudad Madera (Chihuahua, Mexico) Sarapiqui (Costa Rica) Kamabai and Kamalo (Northern Province, Sierra Leone) Kaohsiung (Taiwan) Missionaries today MISSIONARY ZONES Prelature of Labrea (Amazonas, Brazil) History of the Purus Physical description of the region Social geography Evangelization Diocese of Shangqiu (Henan, People’s Republic of China) Historical background to the Augustinian Recollects in China Shanghai Preparation (1919-1923) Geography, economy, and society of the Kweiteh mission The first stage (1924-1930) The second stage (1931-1937) The third stage (1938-1952) The fourth stage: beyond the bamboo curtain MISSIONARY MINISTRIES Boy's Town (Aguascalientes de Cartago, Costa Rica) St Monica’s home (Fortaleza, Ceará, Brazil) CARDI, the Augustinian Recollect Centre for Integral Development, Mexico DF Service to immigrants Latin-American Chaplaincy, London The Chinese chaplaincy in the Archdiocese of Madrid