In the following years there was a fruitful epistolary relation between Shanghai, Manila, Rome and the apostolic vicars inside China. The provincial chapter in 1922 commissioned the new provincial Celestino Yoldi, so that he would ask the Holy See for a missionary territory in China. Propaganda Fide did not respond directly to his petition, but rather asked about the missions in Palawan (the Philippines), how many religious were prepared to go to China and what economic means they had to establish the mission. Whilst this was happening, the Recollects were immersed in the search for a concrete place. In 1923 monsignor Noé Tacconi, the apostolic vicar for West Henan, offered part of the mission to the Recollects. 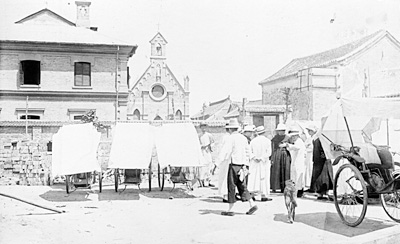 The Recollects arrived bit by bit until they established a mission which was exemplary.

Hopes are reborn and rapidly the efforts are multiplied. Tacconi, the Apostolic Delegate, and the Director General of the Institute for Foreign Missions offered favourable reports for the handover. On the 15th of November 1923 Propaganda Fide authorizes the entrance of the Augustinian Recollects into the north-east of Henan. From 1924 they select the most capable religious to respond to such a hard task.

Geography, economy, and society of the Kweiteh mission
index Introduction Missionaries out of necessity Mission, a complex and all-embracing term Religious, lay people, and volunteer missionaries Missionaries according to the laws Constitutions of the Order of Augustinian Recollects Statutes of the Missions Missionaries by inheritance St Augustine Cultivating the missionary spirit The Augustinian Recollection, missionary right from the start The three stages of the Augustinian Recollect missions The Philippines, “surname” of the province of St Nicholas Japan, seed-bed of martyrs The Province’s missions in the 19th century The missions save the Order Spreading out throughout the world (1896-1906) St Ezequiel Moreno The Province’s missions in the 20th century Introduction The Philippines in the 20th century Prelature of Ciudad Madera (Chihuahua, Mexico) Sarapiqui (Costa Rica) Kamabai and Kamalo (Northern Province, Sierra Leone) Kaohsiung (Taiwan) Missionaries today MISSIONARY ZONES Prelature of Labrea (Amazonas, Brazil) History of the Purus Physical description of the region Social geography Evangelization Diocese of Shangqiu (Henan, People’s Republic of China) Historical background to the Augustinian Recollects in China Shanghai Preparation (1919-1923) Geography, economy, and society of the Kweiteh mission The first stage (1924-1930) The second stage (1931-1937) The third stage (1938-1952) The fourth stage: beyond the bamboo curtain MISSIONARY MINISTRIES Boy's Town (Aguascalientes de Cartago, Costa Rica) St Monica’s home (Fortaleza, Ceará, Brazil) CARDI, the Augustinian Recollect Centre for Integral Development, Mexico DF Service to immigrants Latin-American Chaplaincy, London The Chinese chaplaincy in the Archdiocese of Madrid