Inaugurated in Marcilla the exhibition “Romero. From House to Home” with a conference by the director of the Navarran Heritage and Art Chair at the University of Navarra.

Ricardo Fernández Gracia gave the conference “Heritage and identity. An outstanding pictorial group in the Augustinians of Marcilla”, which officially opened this exhibition of romantic painting and portraits of the 19th century in the convent of the Augustinian Recollects of Marcilla (Navarra) within the framework of the 128th Provincial Chapter that takes place in the place. 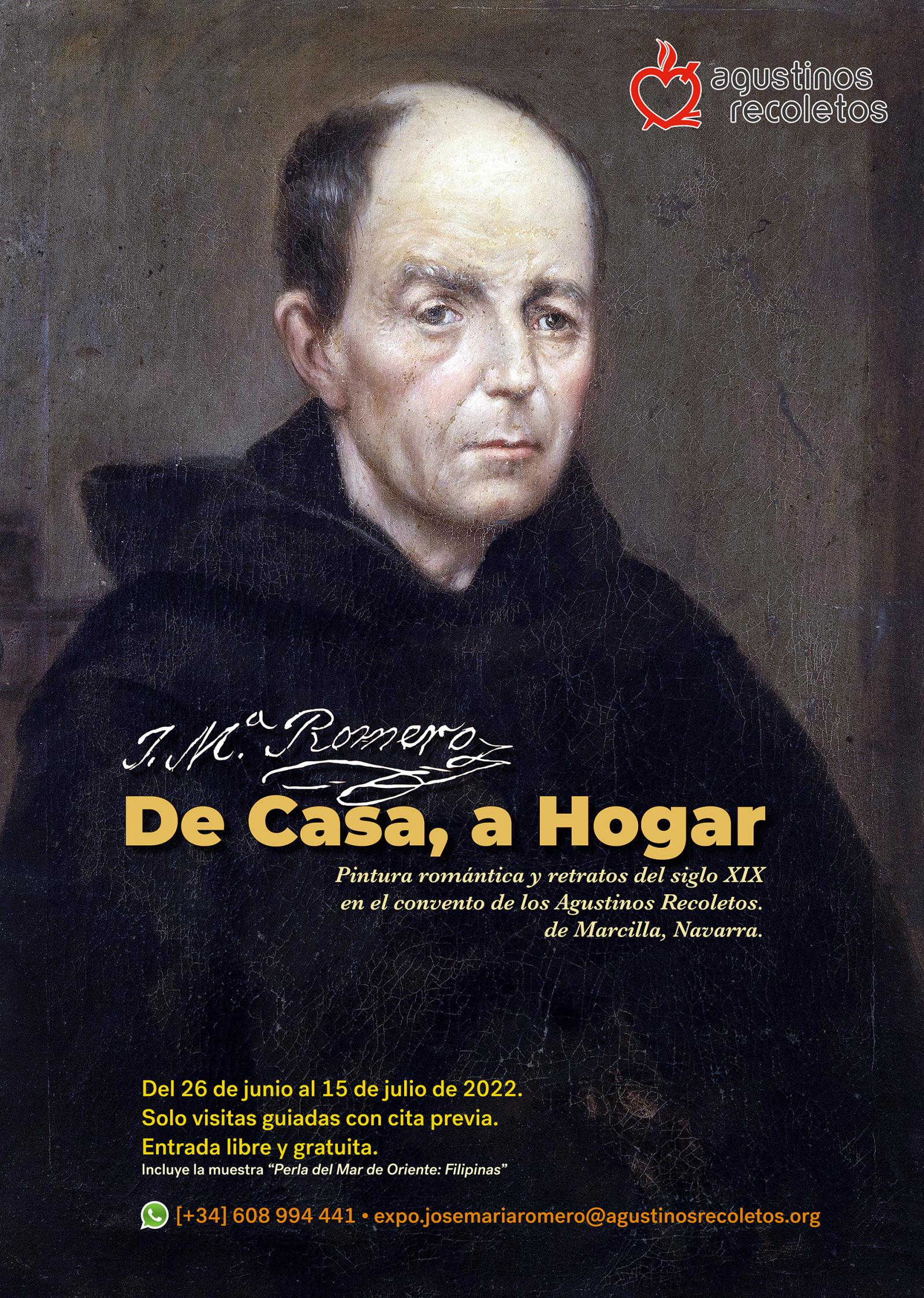 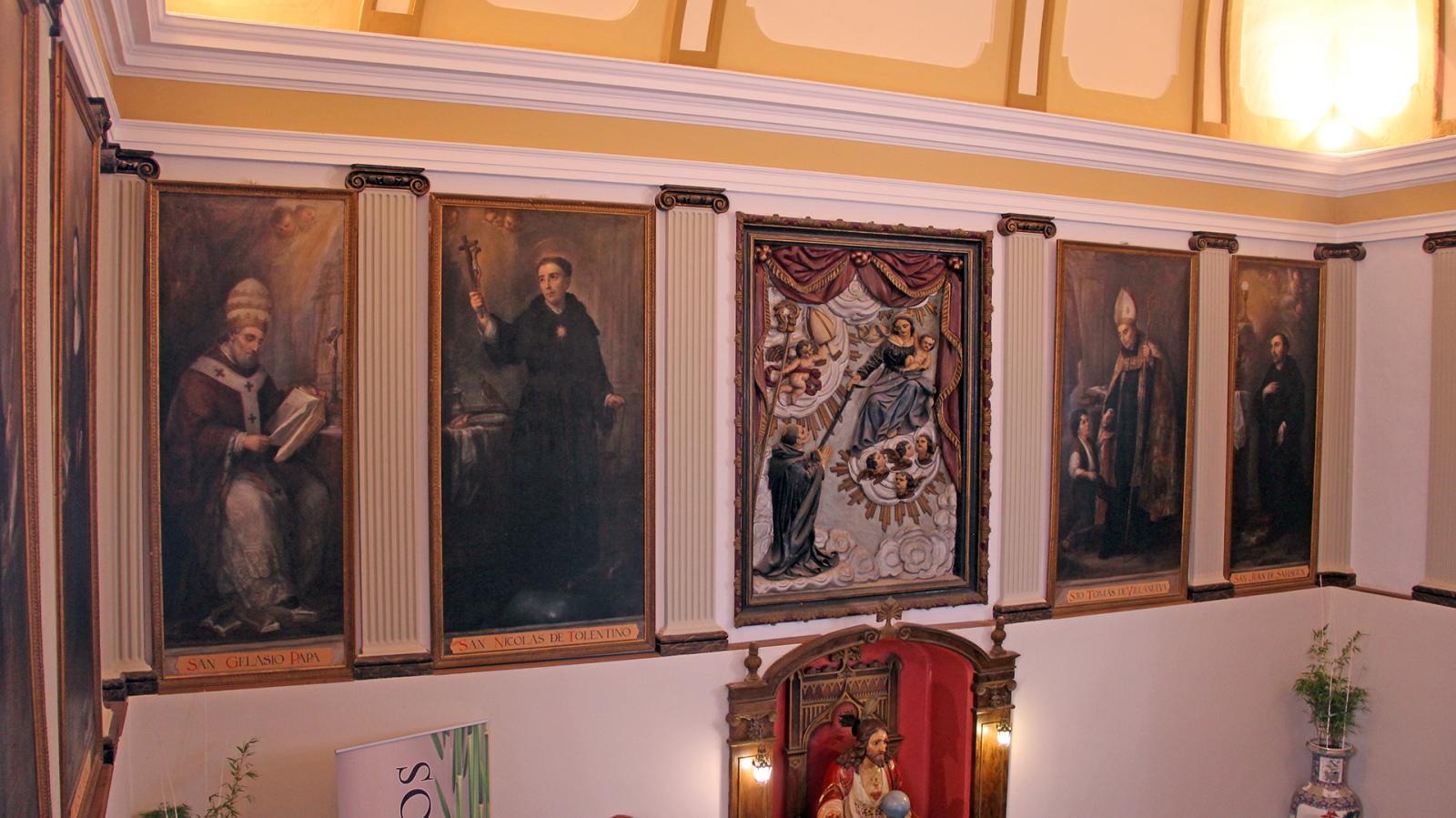 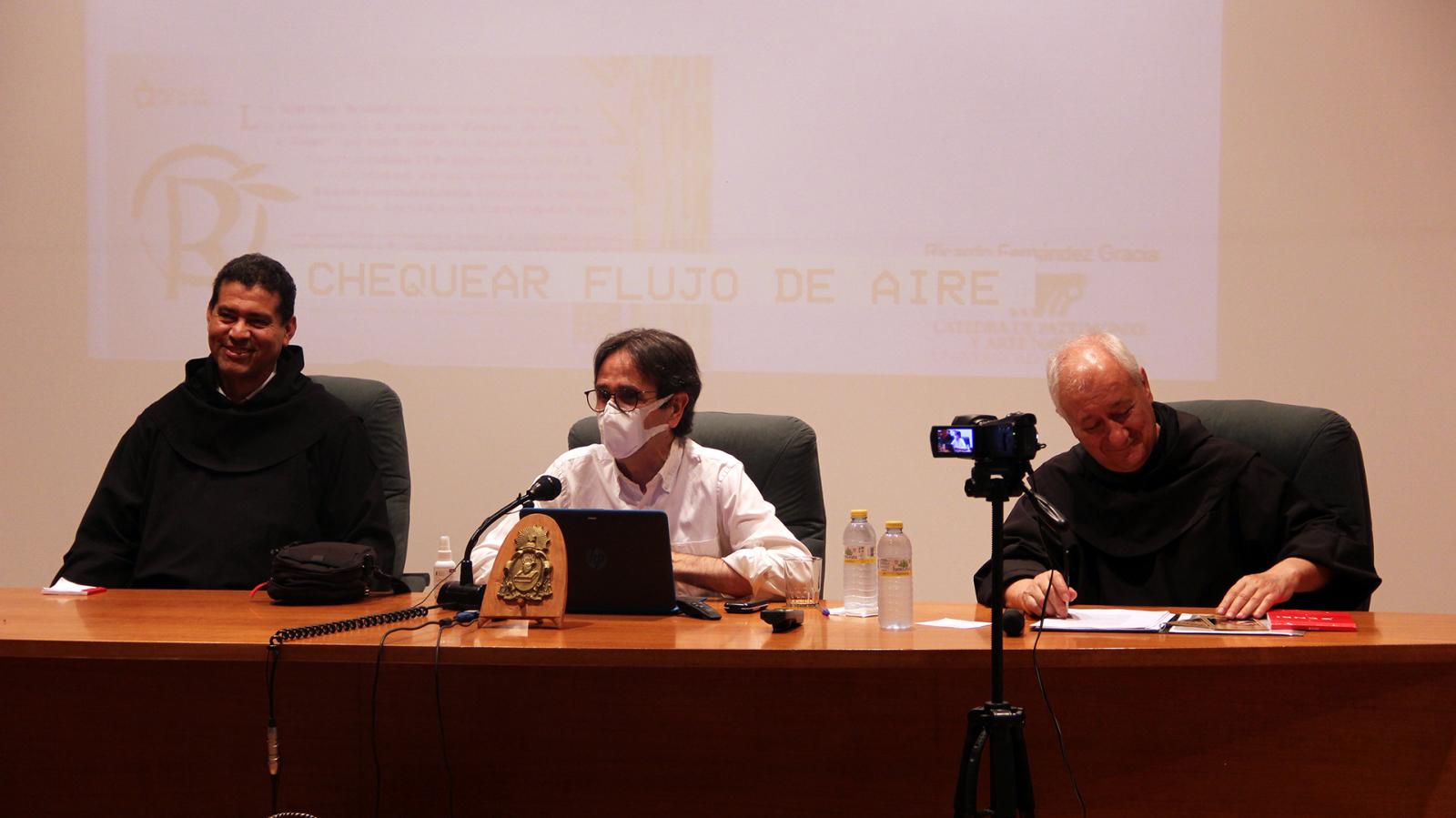 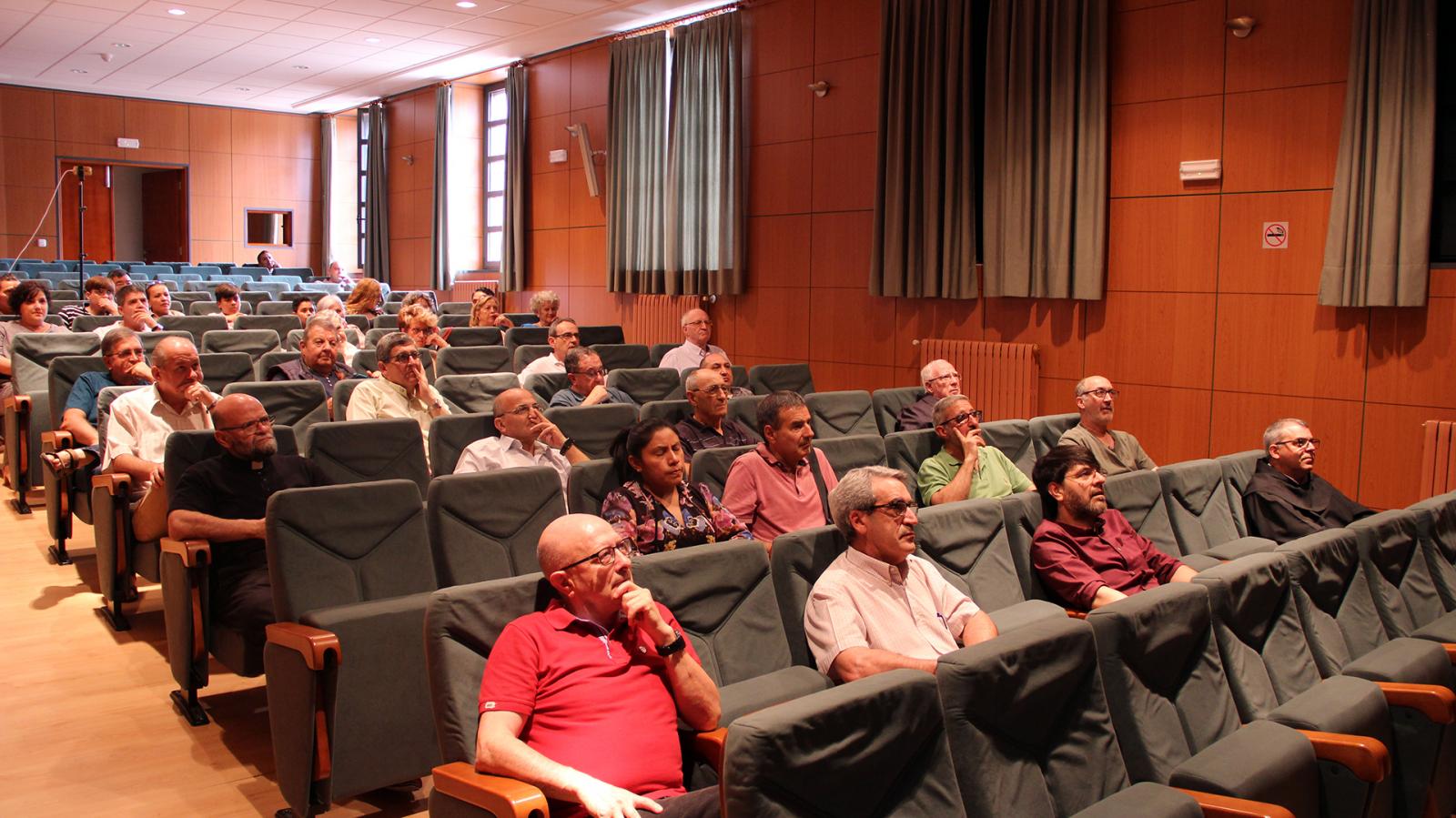 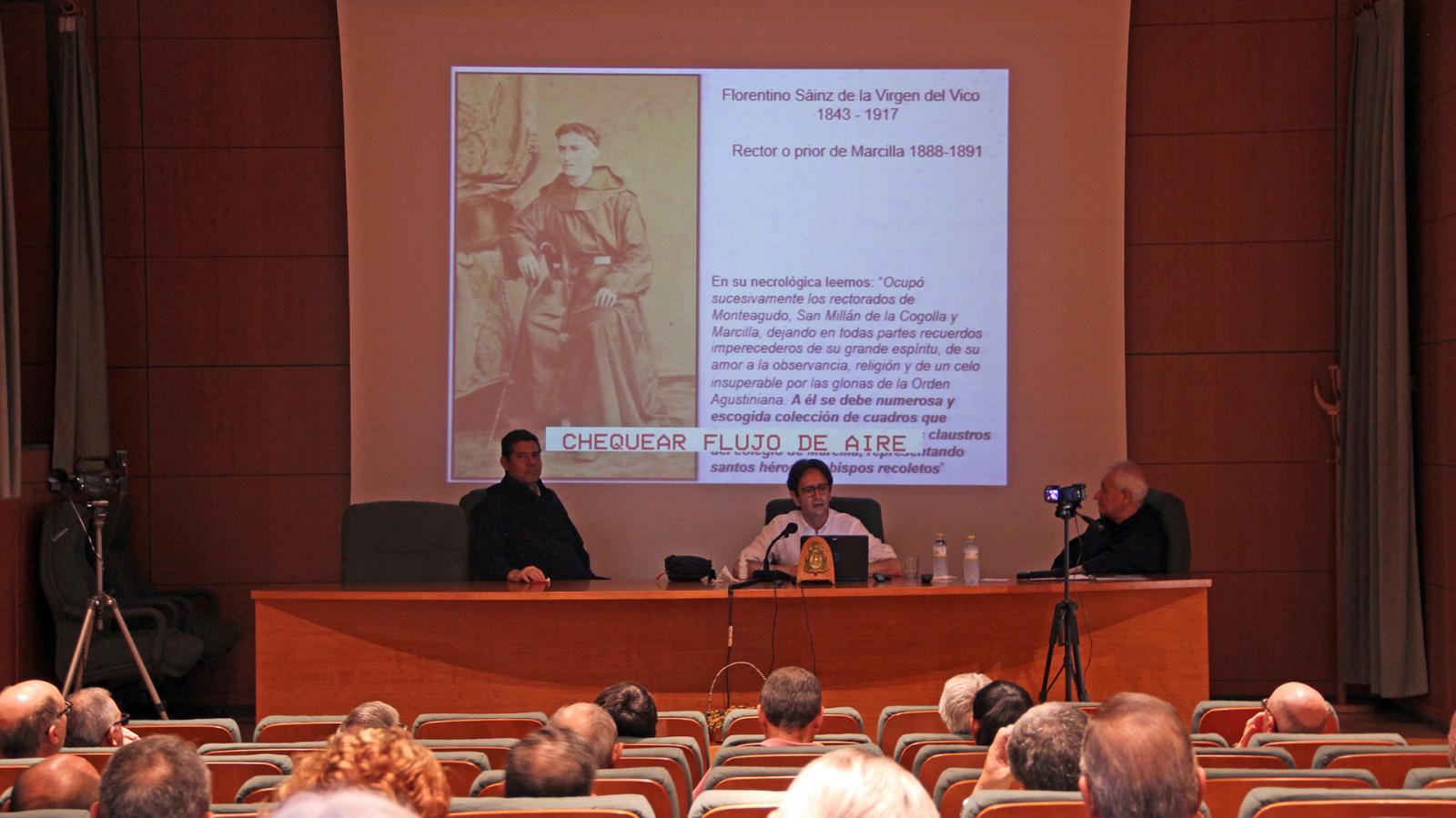 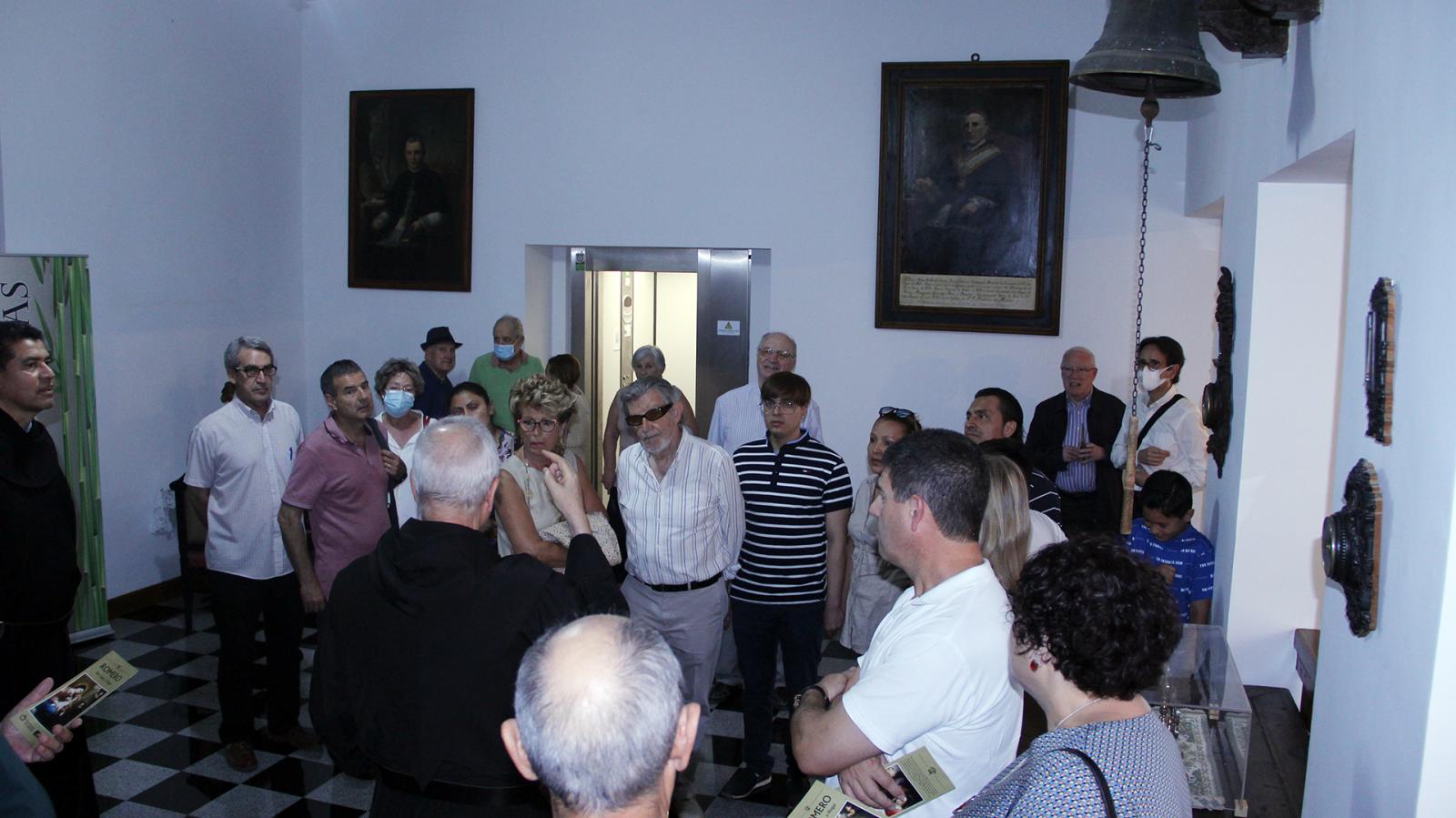 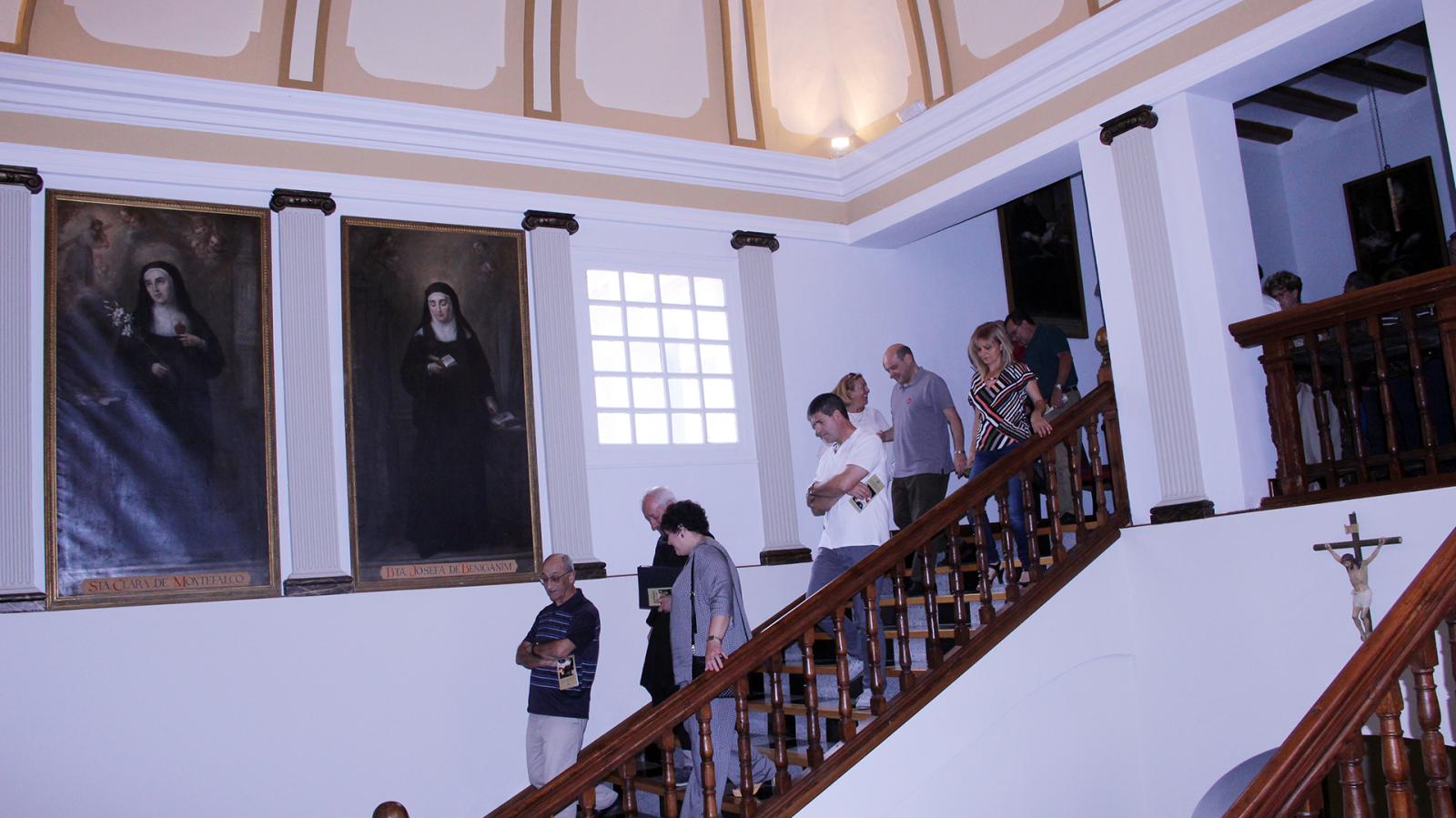 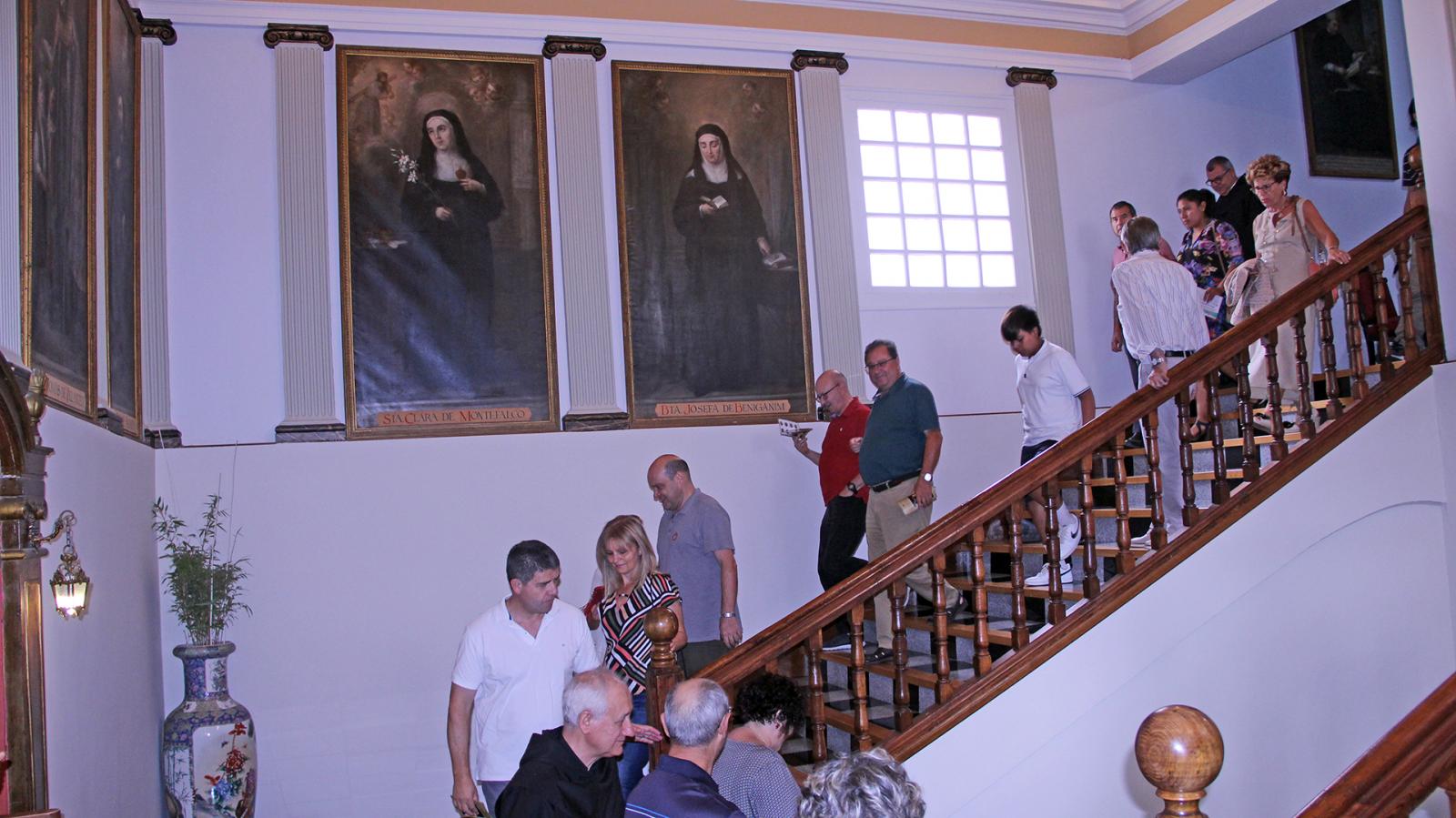 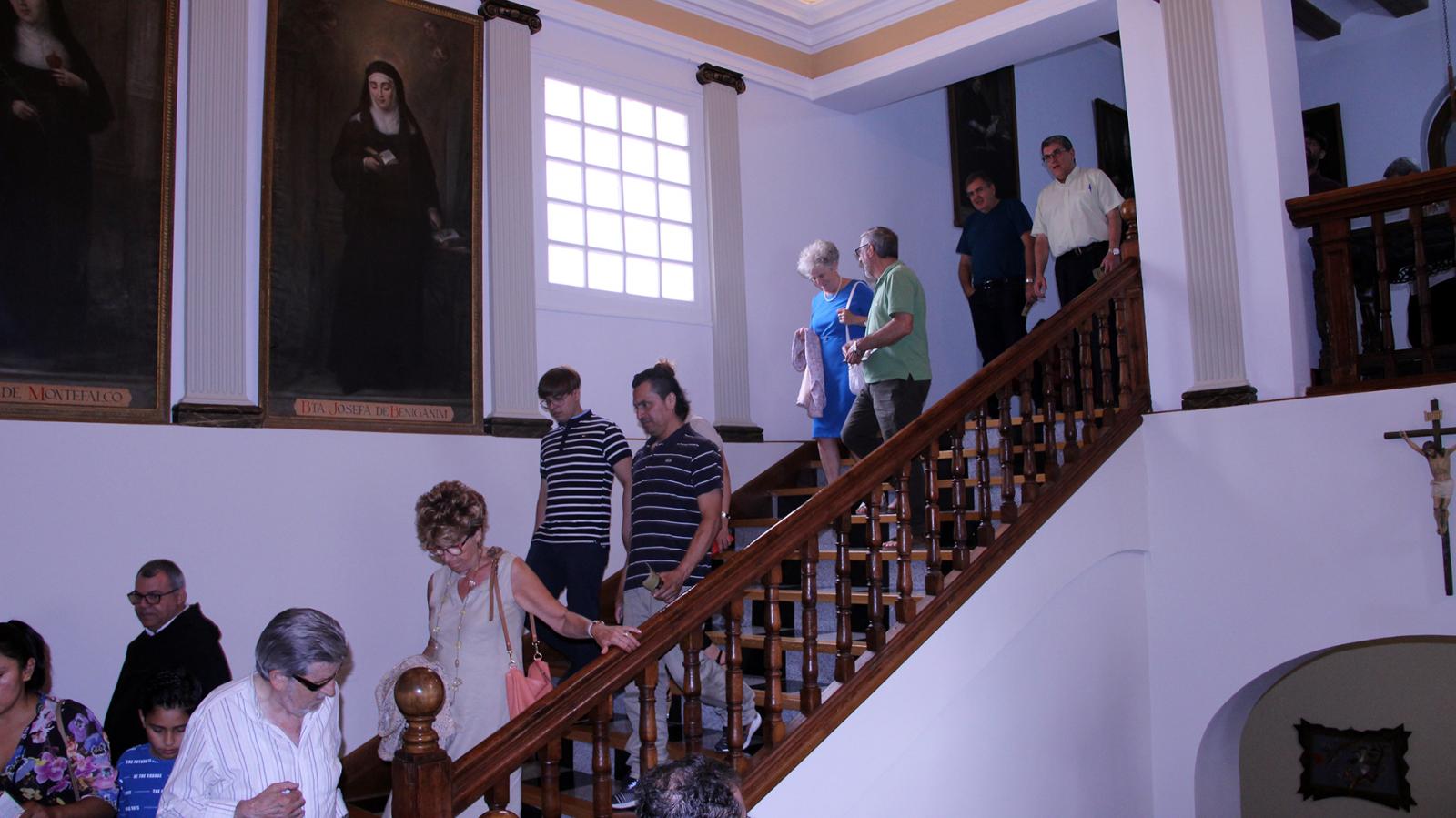 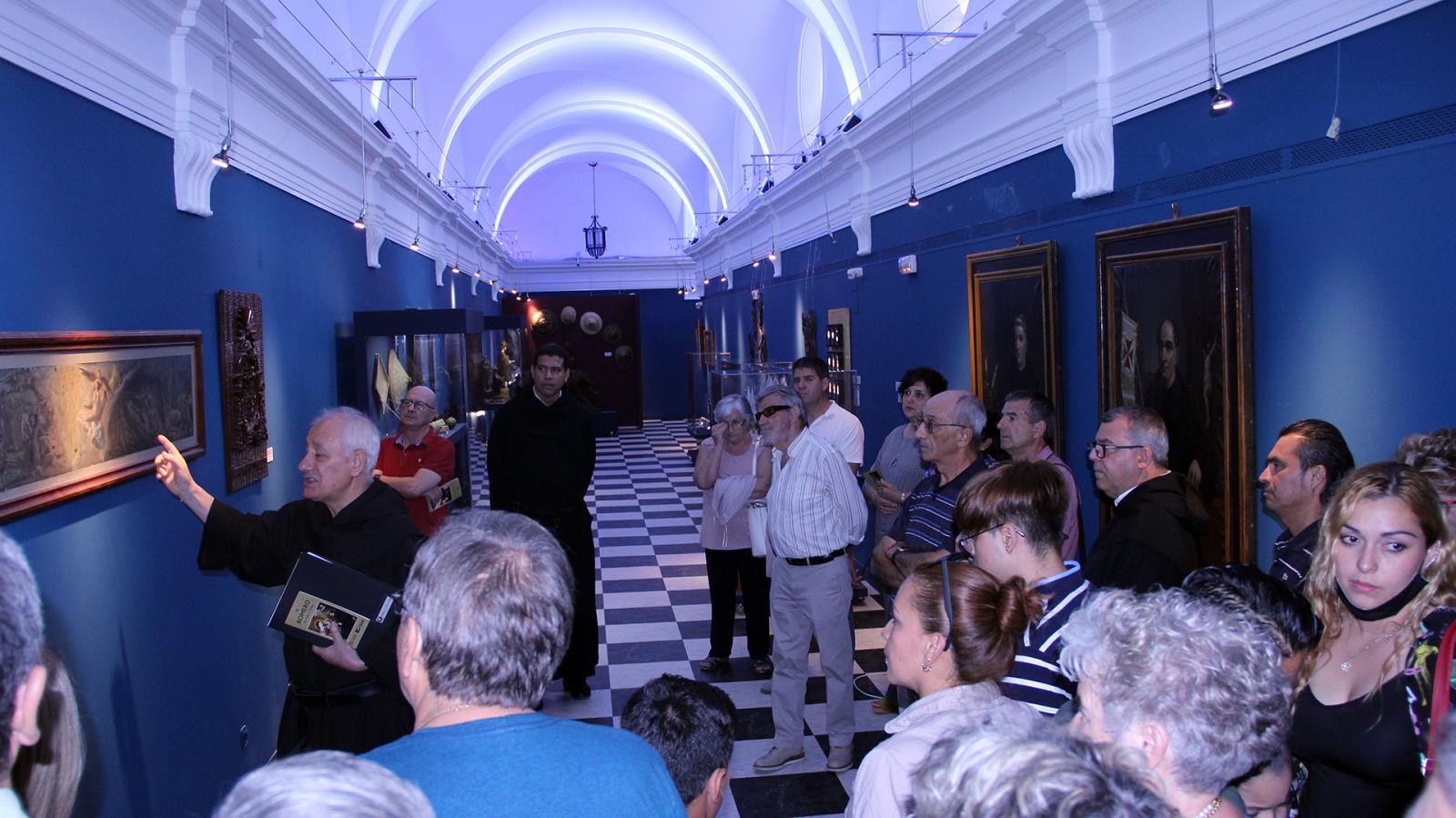 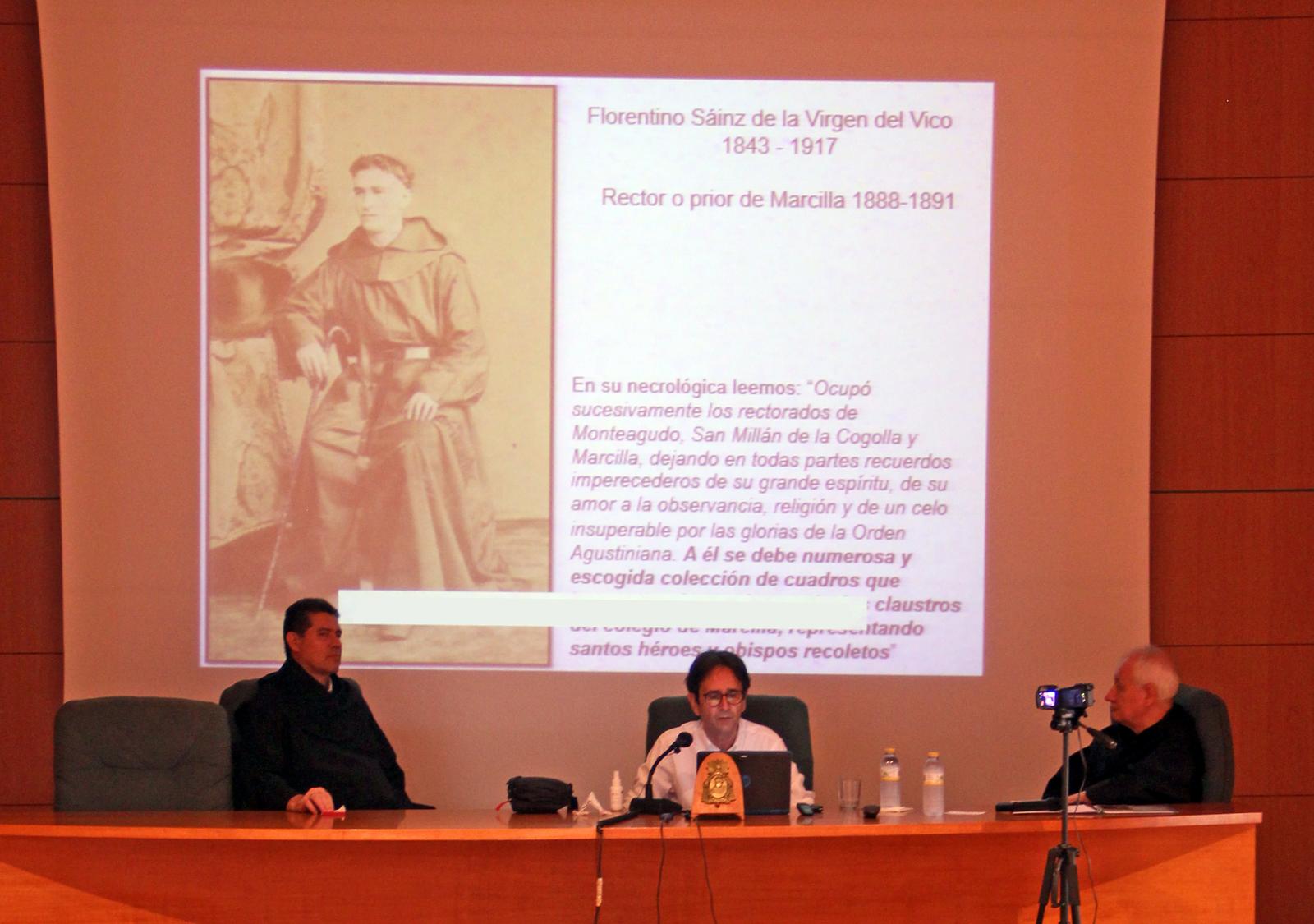 The director of the Navarran Heritage and Art Chair at the University of Navarra, Ricardo Fernández Gracia, gave the conference “Heritage and identity. An outstanding pictorial group in the Augustinian Recollects of Marcilla”, with which the exhibition “Romero. De Casa a Hogar”, which can be visited between June 26 and July 15 in said convent, free of charge, through previously arranged guided tours (see poster in the photo gallery).

It is a set of paintings by the Sevillian romantic artist and portraitist José María Romero (1816-1894) that includes a gallery of saints from the Augustinian Recollect Family and a series of portraits of missionary bishops, all within the unique setting of the called "royal staircase" conventual.

The audience for the conference was the religious participating in the 128th Chapter of the Province of Saint Nicholas of Tolentine —including the prior general of the Order, the outgoing prior provincial and the prior provincial-elect—, religious of the Recollect community of Marcilla, members of the Secular Augustinian Recollect Fraternity, collaborators and friends of the house, and can be followed in its entirety in this video (in Spanish):

Fernández Gracia is a full professor of Art History at the University of Navarra and a corresponding academician at the Royal Academy of History. He has been director of the Department of Art and, since 2009, director of the Chair of Heritage and Navarran Art of the aforementioned University.

Between 1999 and 2015 he belonged to the Navarra Council of Culture and in 2015 he was part of the National Commission for the V Centenary of the Birth of Santa Teresa. His research focuses fundamentally on three areas: iconography, promotion of the arts, and Navarrese historical-artistic heritage.

In 2015 he was named "Distinguished Citizen of the City of Puebla" and received the Clavis Palafoxianum, with which the Government of the State of Puebla (Mexico) recognizes people who contribute to the cultural, artistic and academic development of Puebla or Mexico. He is a founding member of the Ateneo de Navarra, has been part of the Board of Trustees of the Foundation for the Conservation of the Historical Heritage of Navarra (2008-2013) and is a member of the Council of the Palafoxiana Library.

"Romero. From House to Home”

One thing is the cold house and another the warm home. A house is something material, perhaps comfortable, perhaps expensive, of one style or another, in one neighborhood or another. It moves in the physical coordinates and locates itself in a street map. While the home does not exist if there is no affective charge, produced by memories: photographs, experiences, evocations... There is an emotional atmosphere in it, an atmosphere that allows us to breathe, coexist and grow as people.

This transformation is represented in the convent of Marcilla with the paintings of José María Romero. Its 18 paintings are executed between 1891 and 1894, and the Marcillés convent had begun to function as the house of formation of the Augustinian Recollects in 1865.

The Province of Saint Nicholas then acquired a huge mansion that had been a Cistercian monastery until 1835 and had been abandoned ever since. It had to be physically rehabilitated, made habitable; and then a complex community had to settle there, being of a formative nature, with professors and students, in a time that was also especially politically and socially turbulent, with a vital horizon as far away as the missions in the Philippines.

Romero's paintings are family portraits that create community: they make present the saints of the Recollect Order, with whom the religious can identify and from whose protection and example they benefit. And they add to them other presences, such as those of the illustrious personalities of the Province, the bishops of the Philippines (Ruiz, Encabo and Arrué) and other places (Sesé and Minguella), plus other relevant religious related to Marcilla (Gabino Sánchez, Manuel Maria Martinez and Juan Gascon).

The 16 portraits plus two copies of two paintings by Murillo (Adoration of the Shepherds and Transfixion of Saint Augustine) are shown in the frame of the solemn Royal Staircase, where Alfonso XII climbed on his visit to the convent, on January 27, 1875 .

After admiring Romero's oil paintings, the Exhibition has a second part that transports the visitor to the environments of the Philippines, in which the Augustinian Recollects had been moving for centuries and towards which the young religious of Marcilla were devoted.

Objects, moments or protagonists related to the 19th century have been specifically selected, therefore useful for recomposing the world and the mentality of both Romero and the friars, those who lived in Marcilla and those who entrusted the works to the Sevillian painter.

The knowledge of his biography and artistic personality have experienced, in recent years, a great advance, clearly establishing his birth in 1816 and his death, in Madrid, in 1894. The critics agree in valuing him as “one of the most interesting personalities in the panorama of Sevillian art of the 19th century”. He was a professor at the School of Fine Arts in Seville. In 1867 he moved to Cádiz and in 1872 to Madrid, with stays in Seville and Cádiz.

His great activity and fame revolved around portraiture -generally cold, rigid and academic-, highlighting children's portraits for their creativity and delicacy. He portrayed most of the great Sevillian families. In religious painting, it depends on Murillo's style and models. Also, he painted very refined costumbrista scenes, uniting the festive flavor with traditional attire and gallantry. The catalog of his work is continually growing.

Although all his paintings in Marcilla are signed, none have a specific date, but they would be dated between 1890 and 1891, at the end of Father Florentino Sáinz's priory, at a time of great spiritual and missionary strength of the convent, with a community of more than forty religious.

The link with the painter, then resident in Madrid, had to be Fray Toribio Minguella (1836-1920), recommended as bishop of Puerto Rico in May 1894 and consecrated in August of that same year. He was a cultured and enlightened religious, influential at court, in political and ecclesiastical circles and his name is associated with the arts, visits to the Madrid slaughterhouse and the acquisition of an apostolate, in 1879, for Marcilla that today hangs on the walls of the refectory of the convent of Monteagudo.

In the Royal Staircase we find the portraits of four religious men and women religious, together with a Pope. It never ceases to amaze that fairness more than a century ago in a convent. In all of them an attempt is made to underline its exemplary character for teachers and students of the convent that is a house of formation.

Romero is shown to be indebted to the fine and delicate aesthetics of romanticism with deep Murille roots, handling soft forms, ethereal atmospheres, with a predominance of color over drawing. The oils are applied lightly, to the point of looking like watercolors in some of its parts.

The material is so fluid, without thick impasto, that it reveals the granulation of the canvas. The expression is achieved from the physiognomies of the faces, extraordinarily successful, and the attitudes of the bodies. The backgrounds, dark gray and black, in some parts, dissolve little by little as they unite with the profiles of the figures and objects represented. The different pigments are not cut directly, but melt, still wet, passing from one to the other without any hardness.

Iconographically, we are far from the iconographic types of those same saints, popularized in the Baroque era with theatrical, triumphant, visionary and grandiose connotations. Rather, we can speak of restraint, seriousness, sobriety, serenity, individual intensity and sparse colouring.

The symbolic character of some elements, such as the attributes, is very palpable and provides the necessary keys for the interpretation and iconographic-iconological reading of the whole, which is none other than to sing to all those represented as examples, reminding those who contemplate the whole of the well-known aphorism that states: Nihil recte sine exemplo, docetur, discitur aut vivitur -nothing is taught, learned or lived correctly without example-.

enlarge
And what do you think about this?
Tags
The last
50 years of walking together, creating community and sharing the Augustinian Recollect charism
Twelve new Augustinian Recollect religious after the completion of the 2021-2022 novitiate in Monteagudo, Navarra, Spain
The Low-Rider Bishop, Alphonse Gallegos
The five pre-novices of the Province arrive in Spain and live together for a month of acclimatization and inculturation prior to the start of the novitiate
Cleusa and the martyrs of the Amazon, honored in the VII Pilgrimage of the Martyrs in São Félix de Araguaia
And what do you think about this?