The Guaraciabense Rodrigo Feitosa professes as an Augustinian Recollect in Monteagudo

The novitiate of the Augustinian Recollects for Europe, located in Monteagudo (Navarre, Spain), has lived with joy the religious profession of Rodrigo Feitosa Linhares, who made the vows of poverty, chastity and obedience accompanied by members of the Augustinian-Recollect Family and faithful of the town. 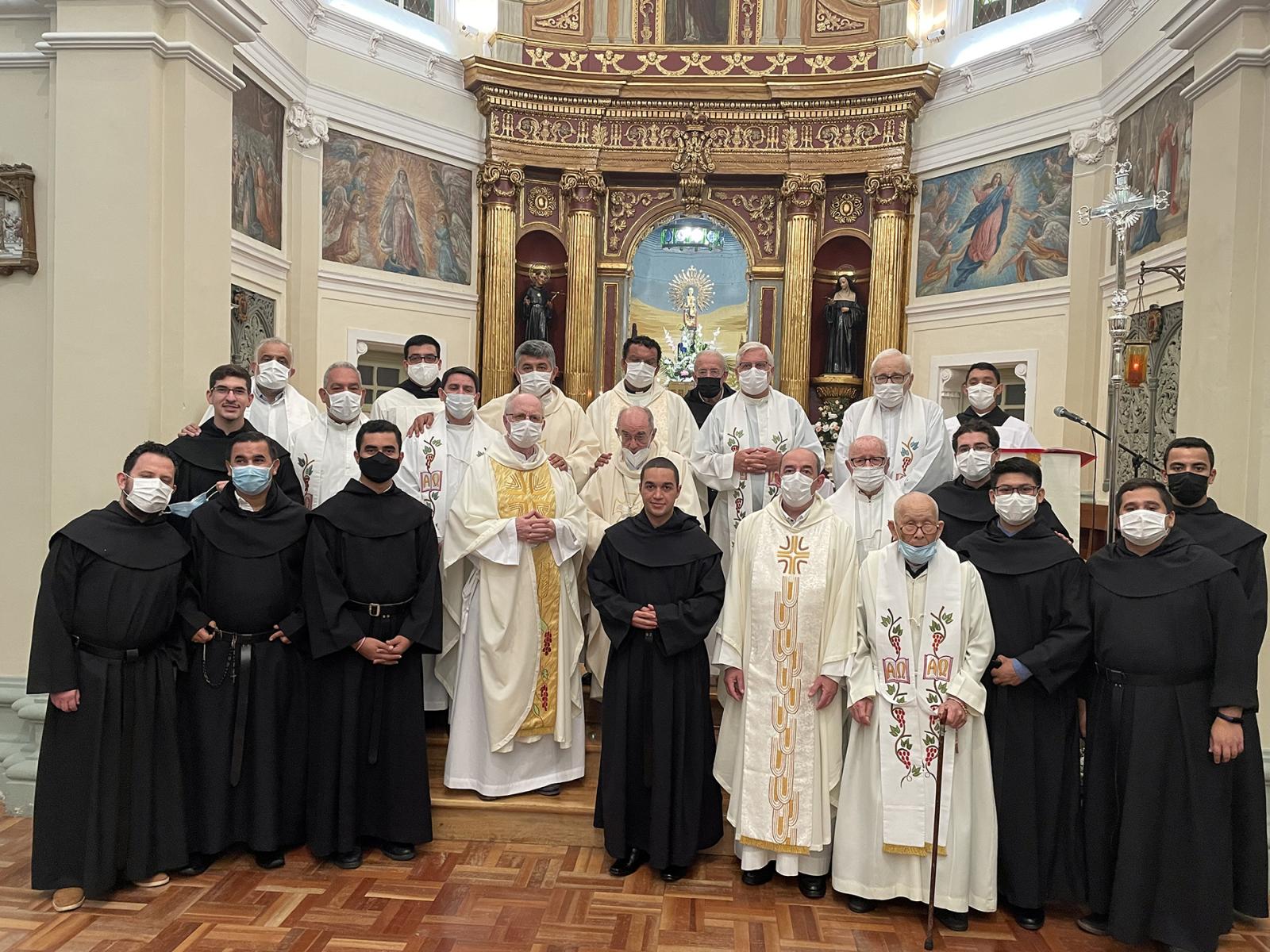 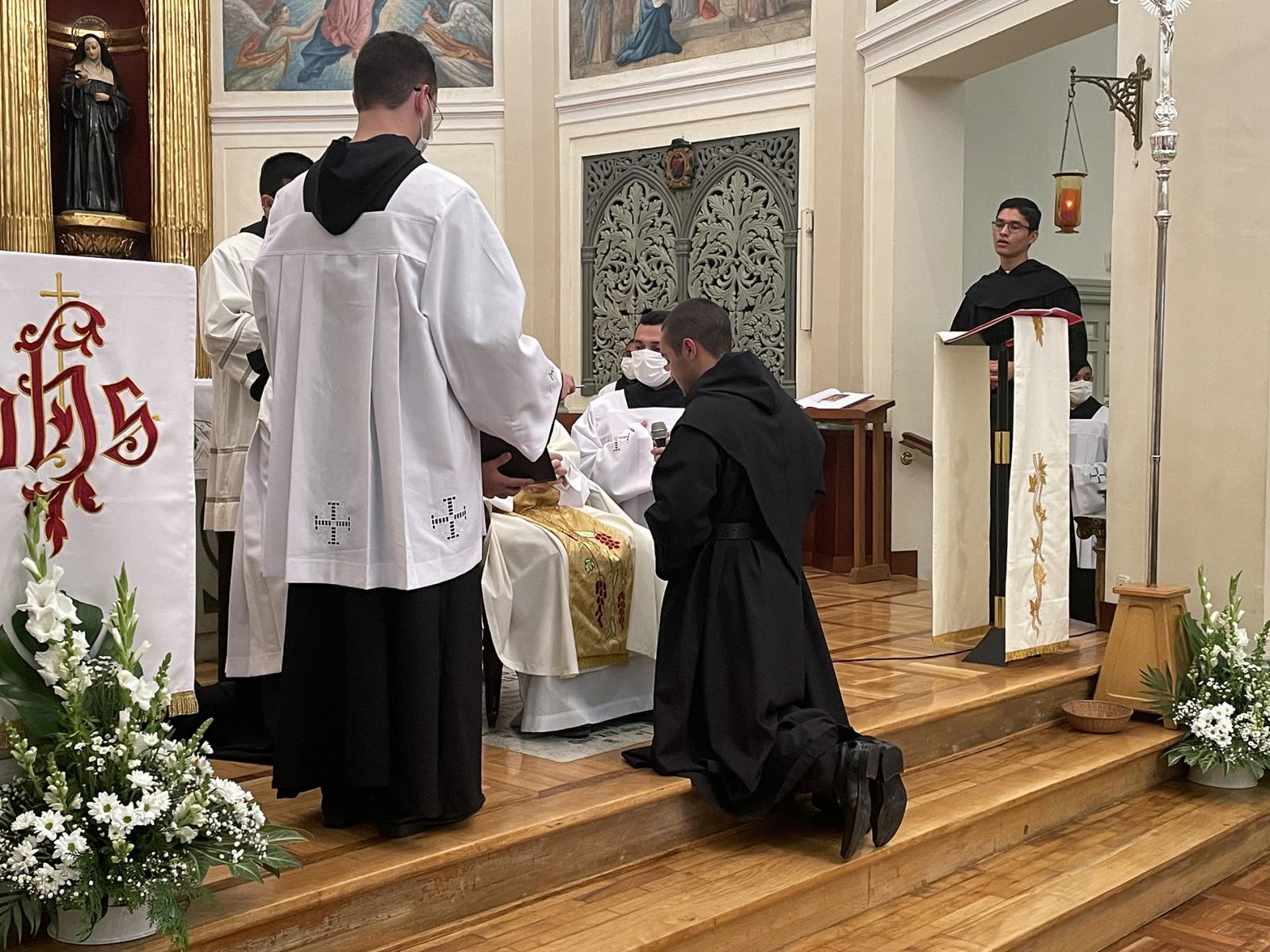 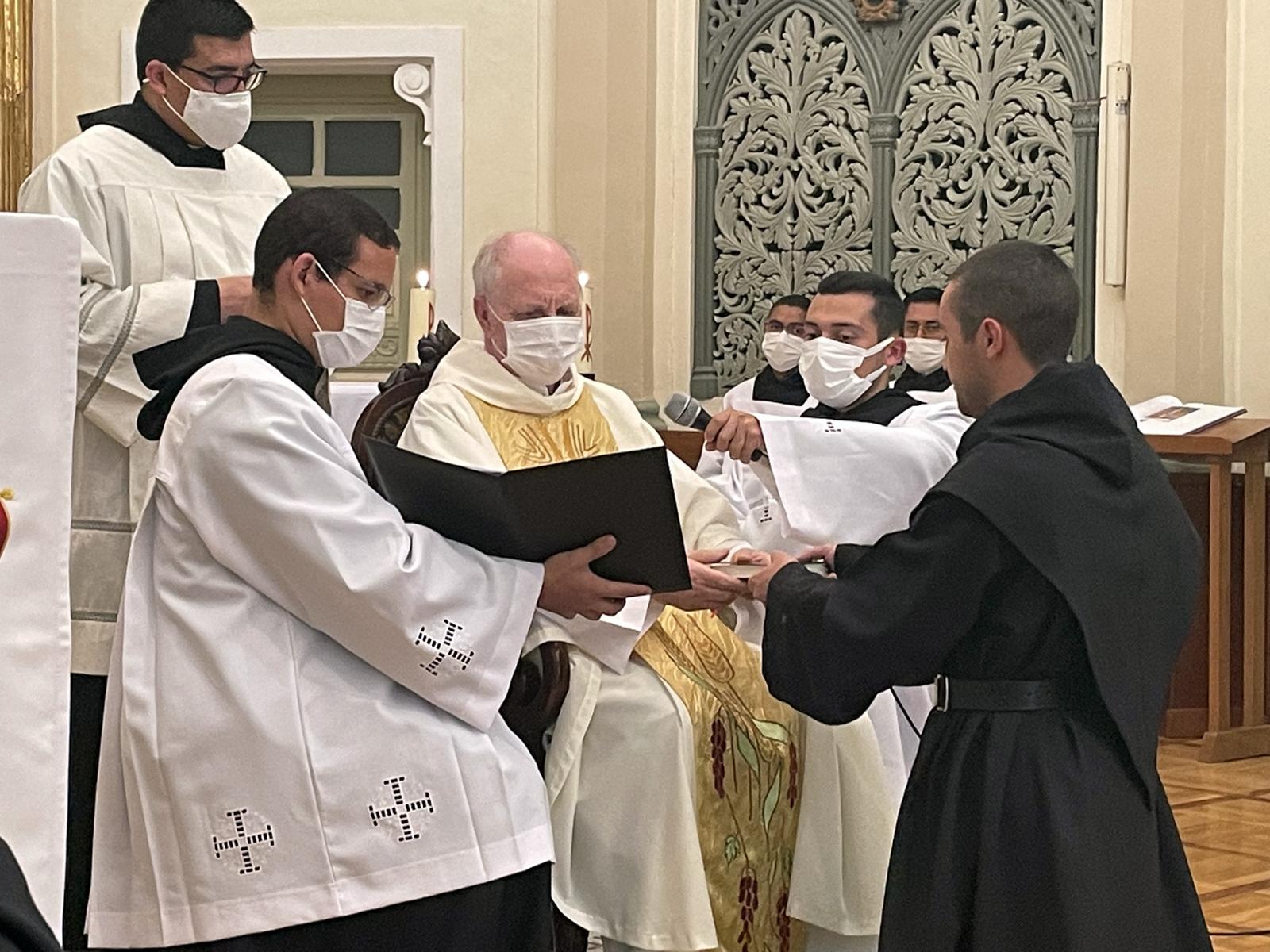 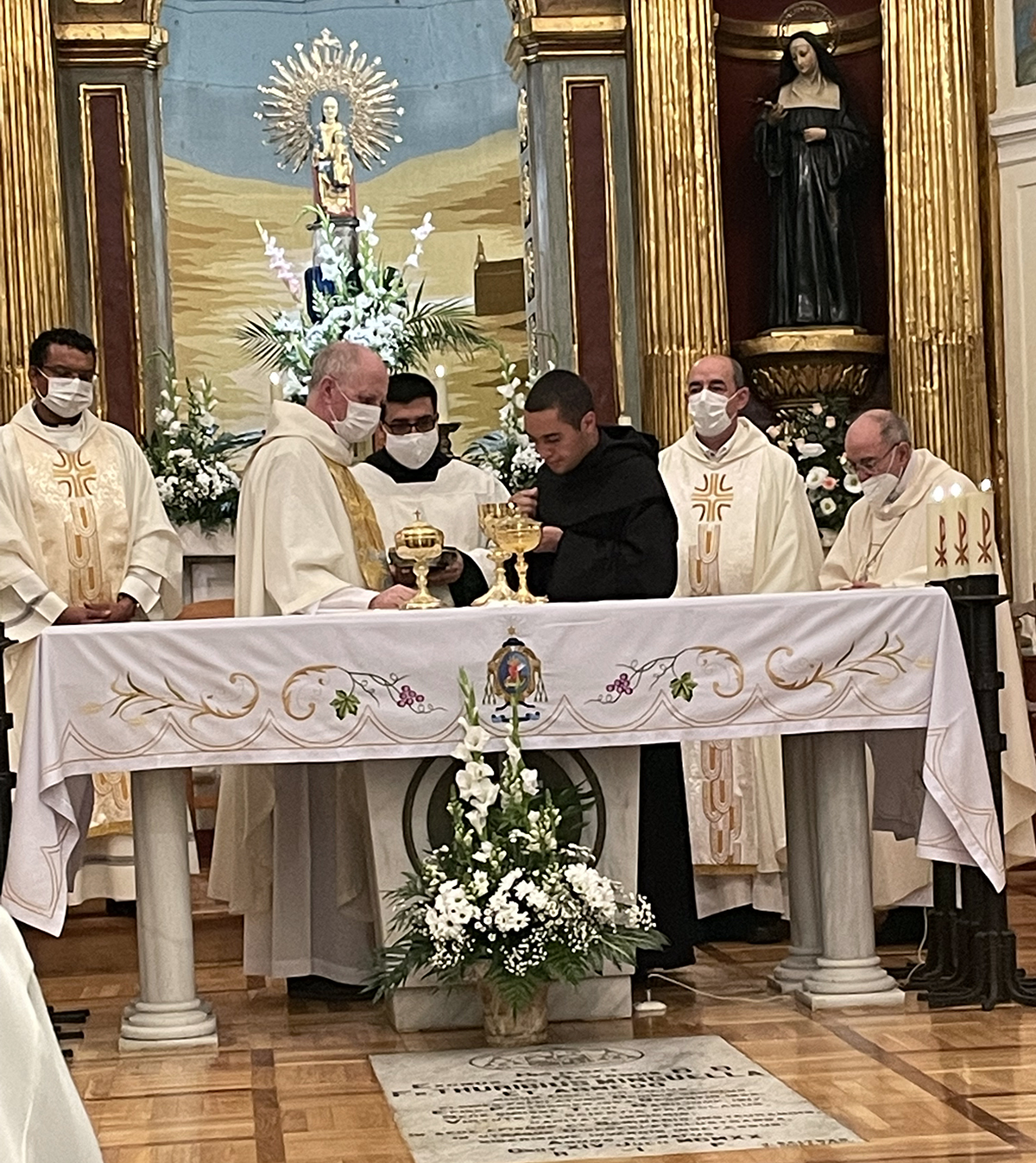 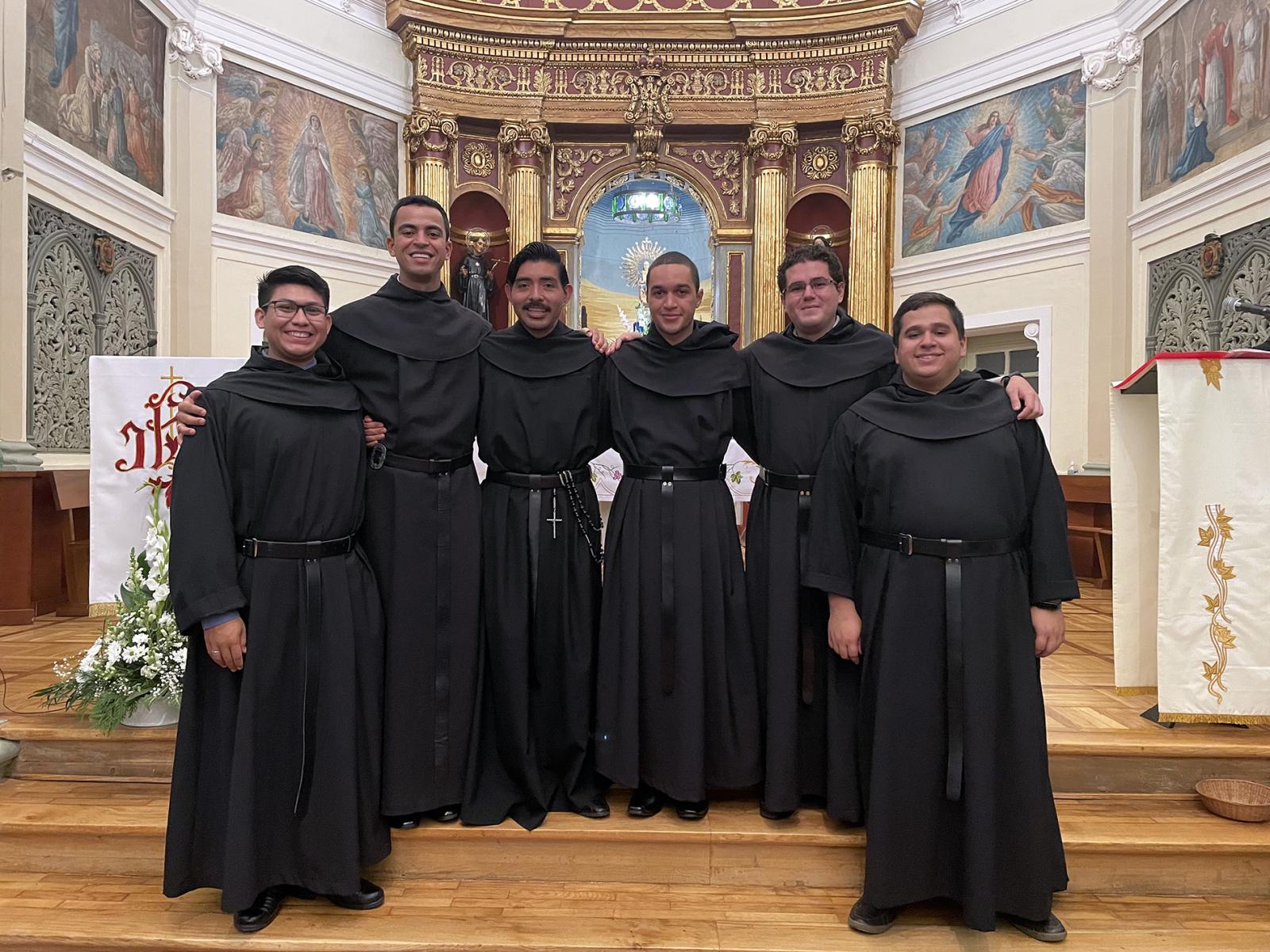 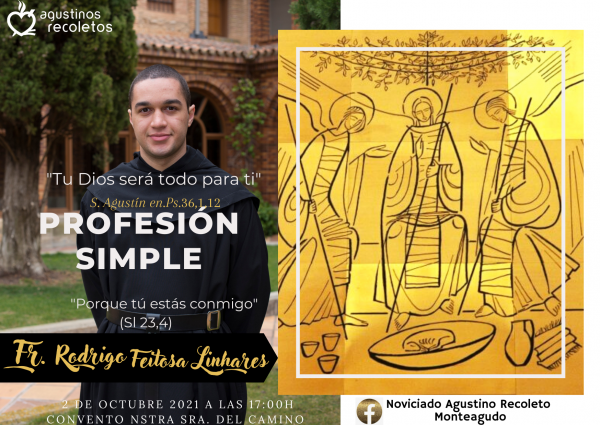 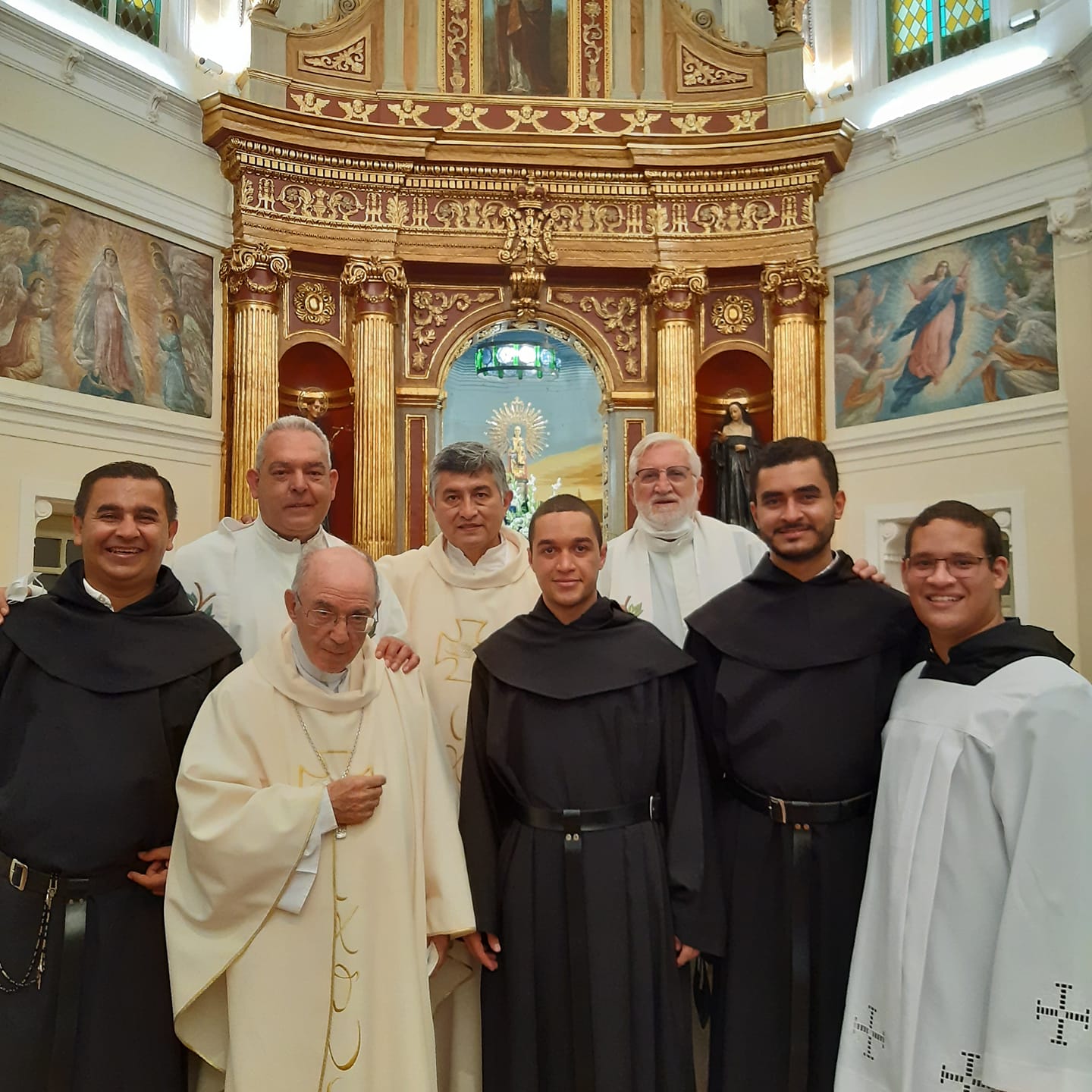 Last Saturday, October 2, Rodrigo Feitosa Linhares (Guaraciaba do Norte, Ceará, Brazil, 1998) issued the simple profession of the evangelical counsels and was received at the Province of Saint Nicholas of Tolentine of the Order of Augustinian Recollects, once he finished his novitiate in the convent of Monteagudo (Navarra, Spain).

Rodrigo made the ceremony alone because his companions from the 2020-2021 novitiate had professed almost months earlier. The   already neoprofessus had begun his novitiate – which must necessarily last a full year – a little  due to the conditions of the pandemic, which delayed and complicated transfers between countries and  obtaining the necessary legal permits to reside in Spain.

The novitiate is a time of great importance in the life of those who feel a specific vocation to religious life. During this year, the candidate acquires a deeper knowledge of the Order, its history, charisma and norms; at the same time there is a personal process of discernment and preparation for an important decision in any personal life project.

The Eucharist began at 5:00 p.m. and was presided over by Rafael Mediavilla, vicar of the Province of Saint Nicholas of Tolentine of the Order of Augustinian Recollects, in representation of the prior provincial.

After the initial rites and listening to the Word of God, Rodrigo answered the president's questions by expressing his firm decision to live in community with the Augustinians. Remember and follow Jesus Christ in poverty, chastity and obedience.

The homily, following the text of the proclaimed Gospel, was an invitation to have an open heart to the acceptance of God's plan with the confidence of a child. Rodrigo then read the formula of the handwritten profession, signed it and received the welcome embrace of the professed religious present.

Already dressed in the habit of the Order and having in his hands the Rule and Constitutions that relate his commitment and the way of life chosen from now on, followed the celebration closely.

Both in the monitions and in the homily there were continuous references to St. Augustine, father and guide of those who commit themselves in this Order to live their consecration. Rodrigo himself had chosen for the invitation to this celebration a phrase from a sermon of the saint:

"Your God will be everything to you."

Before the final blessing, the new Augustinian Recollect religious thanked God for the gift of having been chosen for consecrated life. He extended his gratitude to his parents and family, to the first community in which he lived his faith in Jesus in Guaraciaba, to the Order of Augustinian Recollects, to the formators who have accompanied him on his way, to his community, to those who were present at the celebration and to those who with their prayer had given him support, expressly citing two contemplative orders, the Augustinian Recollects (who have a monastery in their homeland) and the Cistercians of Tulebras.

After the solemn blessing, everyone sang the Salve and the Joseph, a recollect tradition of saturdays. And it was then that Rodrigo received the congratulations of the participants. Rodrigo could not be physically accompanied by his family and friends. But  through social networks, a good number of people from Guaraciaba do Norte (Ceará, Brazil) were present live, where there is an aspirantate of the Augustinian Recollects and a great representation of the Augustinian-Recollect Family. (nuns, Secular Fraternity, Augustinian-Recollect Youth, aspirants).

Interestingly, there was a small photo for the story that accompanies this news. It could be produced given the presence at the ceremony of a good number of current or historical members of the Augustinian Recollect community of Guaraciaba do Norte: the Bishop Emeritus of Tianguá, Francisco Javier Hernández; the current vice-master of novices in Monteguado, Juan Manuel Ramírez; the current missionary in Lábrea (Amazonas, Brazil), Miguel Ángel Peralta; the current parish priest, Santiago Martínez; and several of those who passed through that house as aspirants and today are professed or novice in Monteagudo.

In addition to the entire local community and a good number of members of the Augustinian Recollect Family (Augustinian Recollect Missionaries, Secular Fraternity) of the region and faithful of Monteagudo, there was representation among the priests of numerous communities of the Provinces of Saint  Nicholas of Tolentine and Saint Thomas of Villanueva, including representatives of the training communities of Las Rozas (Madrid) and Monachil (Granada).