Fray Diego Cera (1762-1832), like many other Augustinian Recollect religious throughout the XVII-XX centuries, volunteered to mission in the Philippines. The missionary expedition, composed of thirteen other brothers of the habit, sailed from Cádiz in December 1790 for Veracruz, Mexico; after crossing Mexico, he went to sea at Acapulco, and after crossing the Pacific docked at Manila in June 1792. 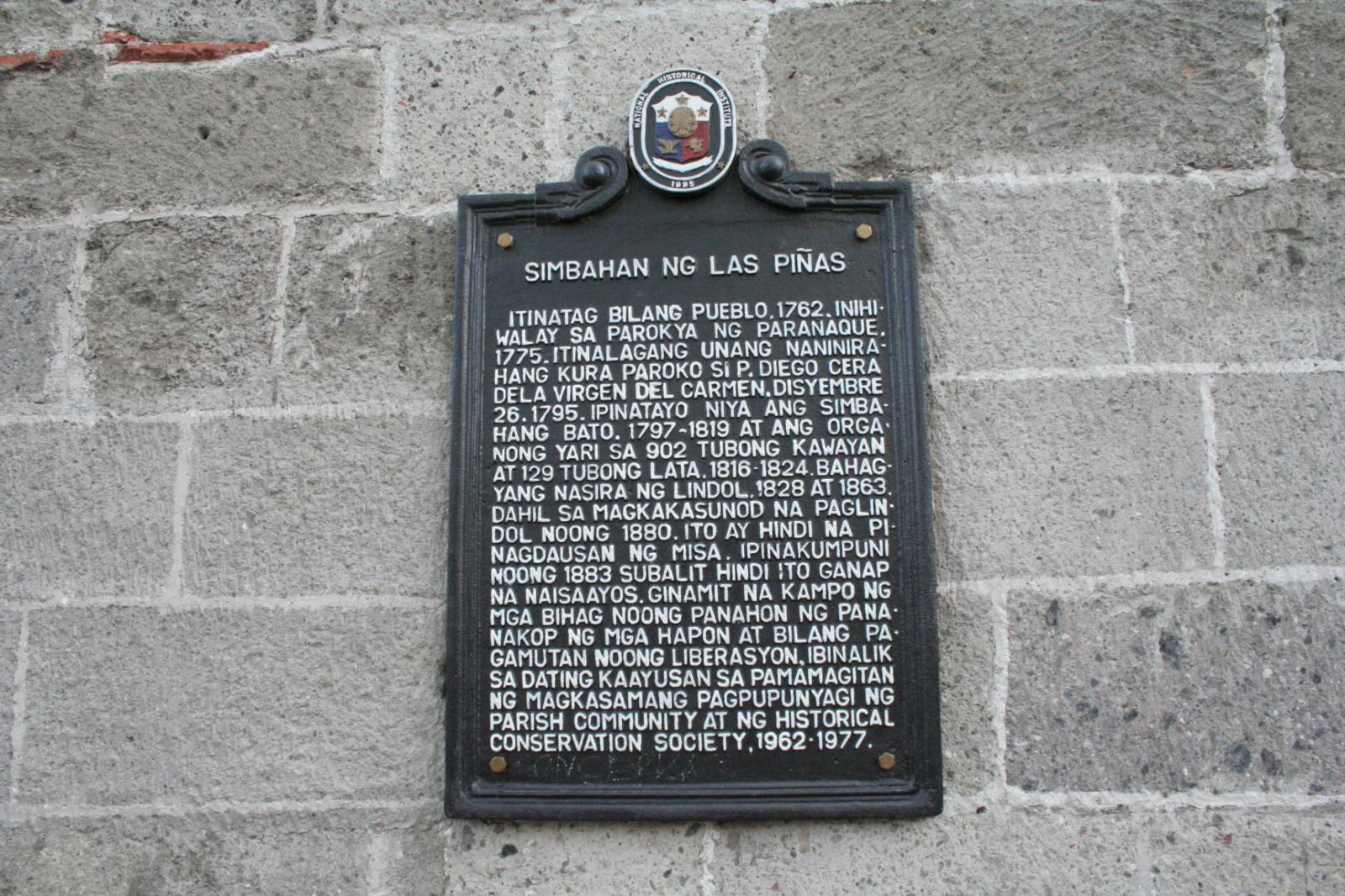 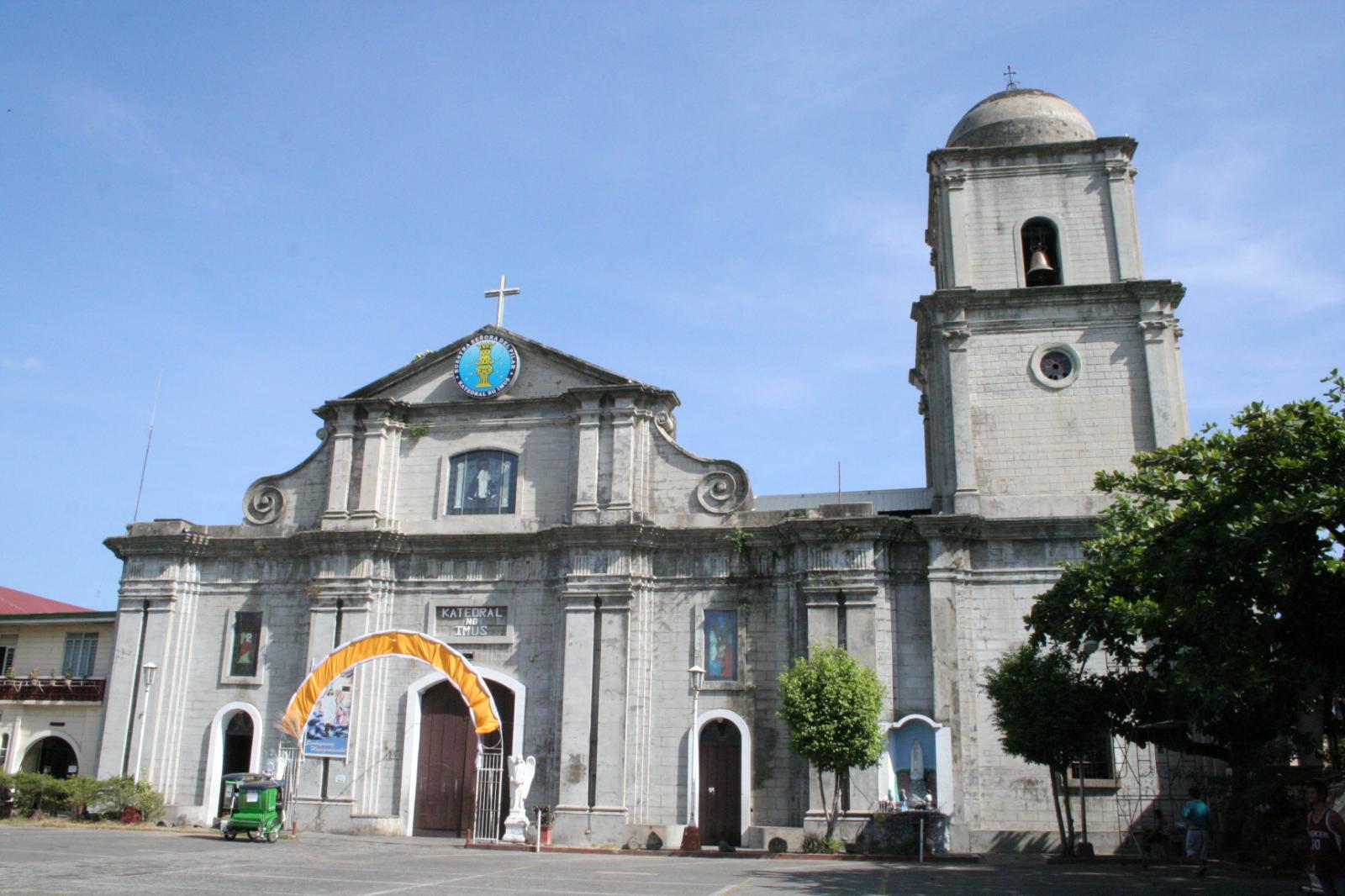 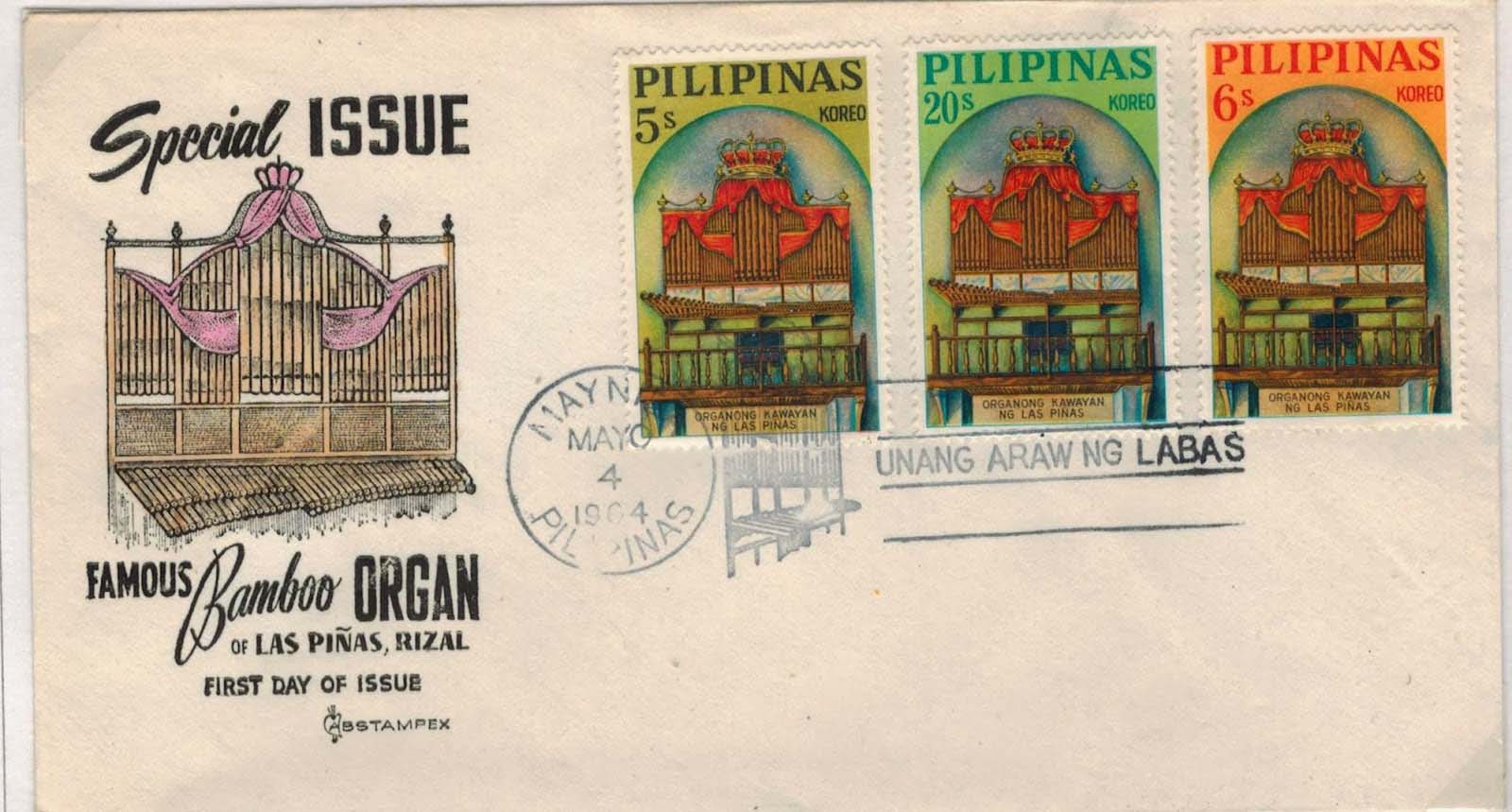 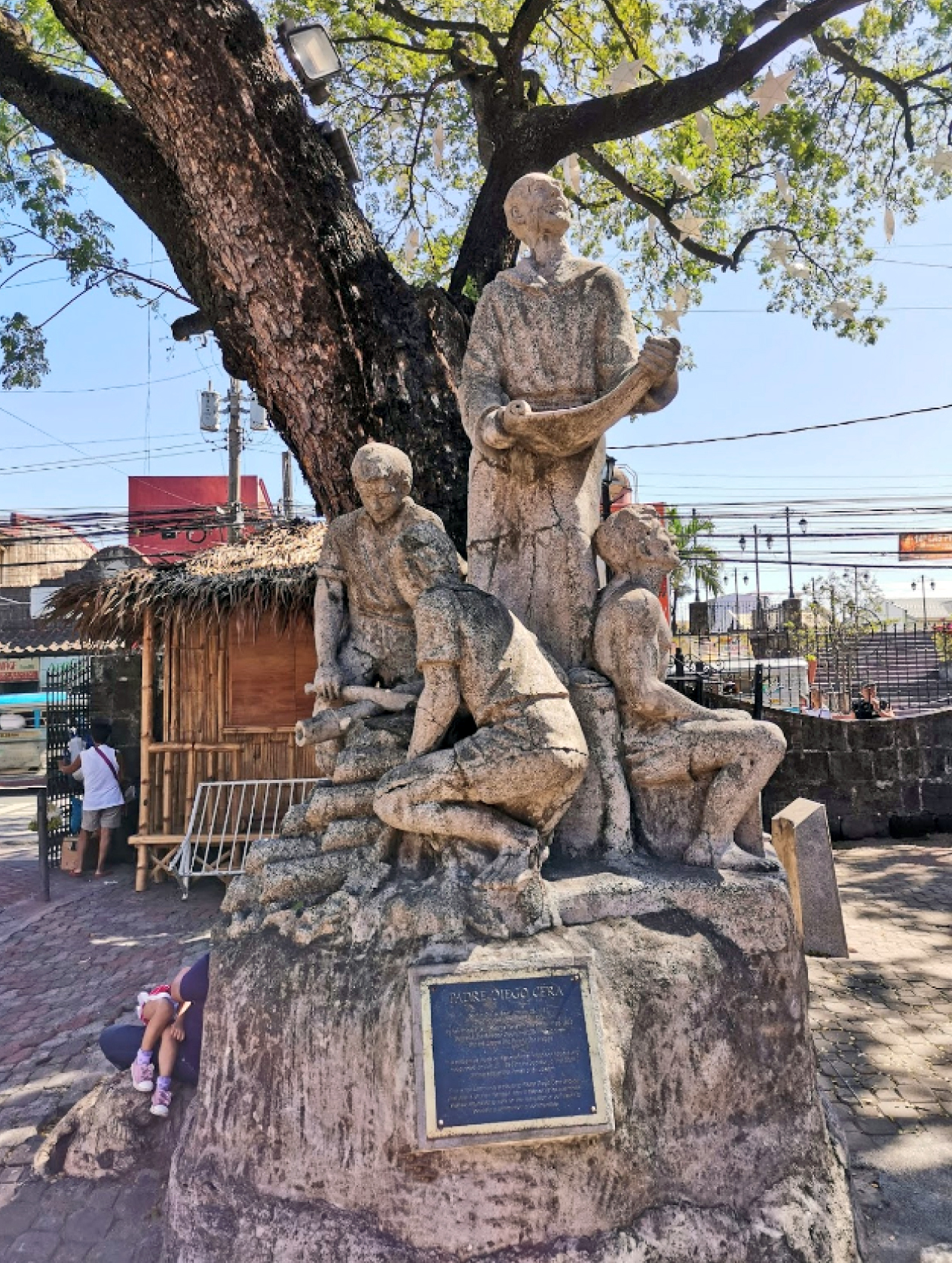 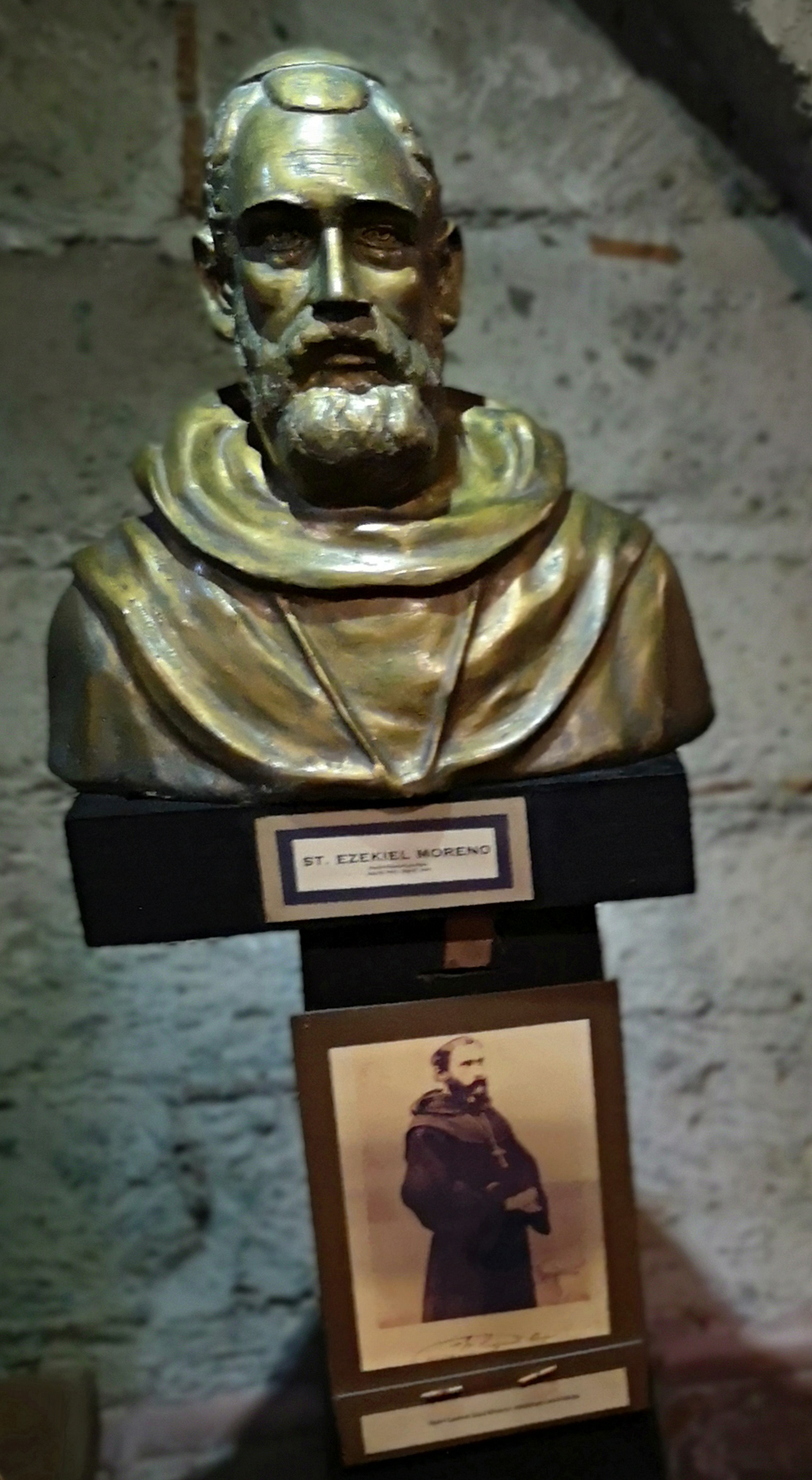 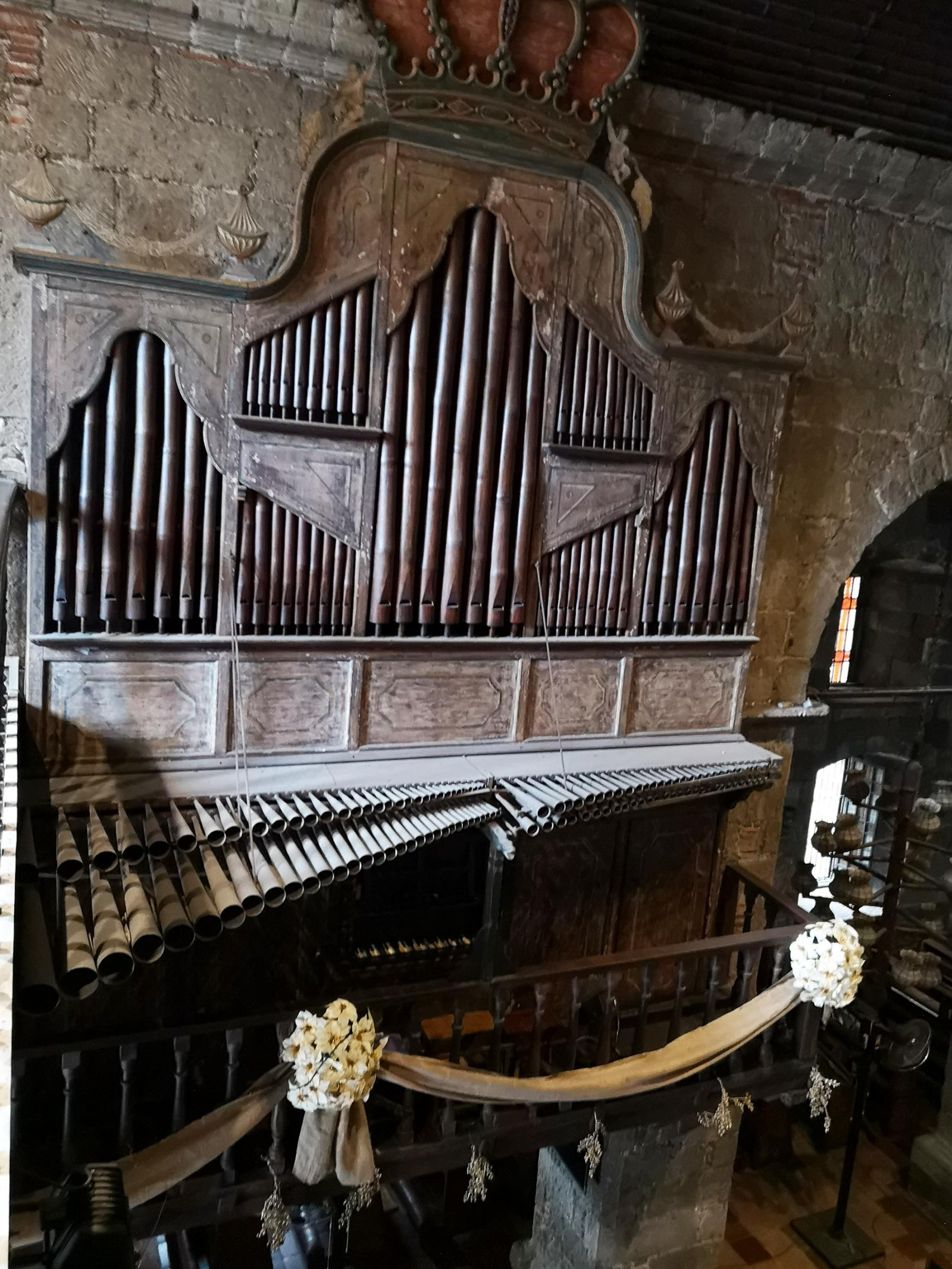 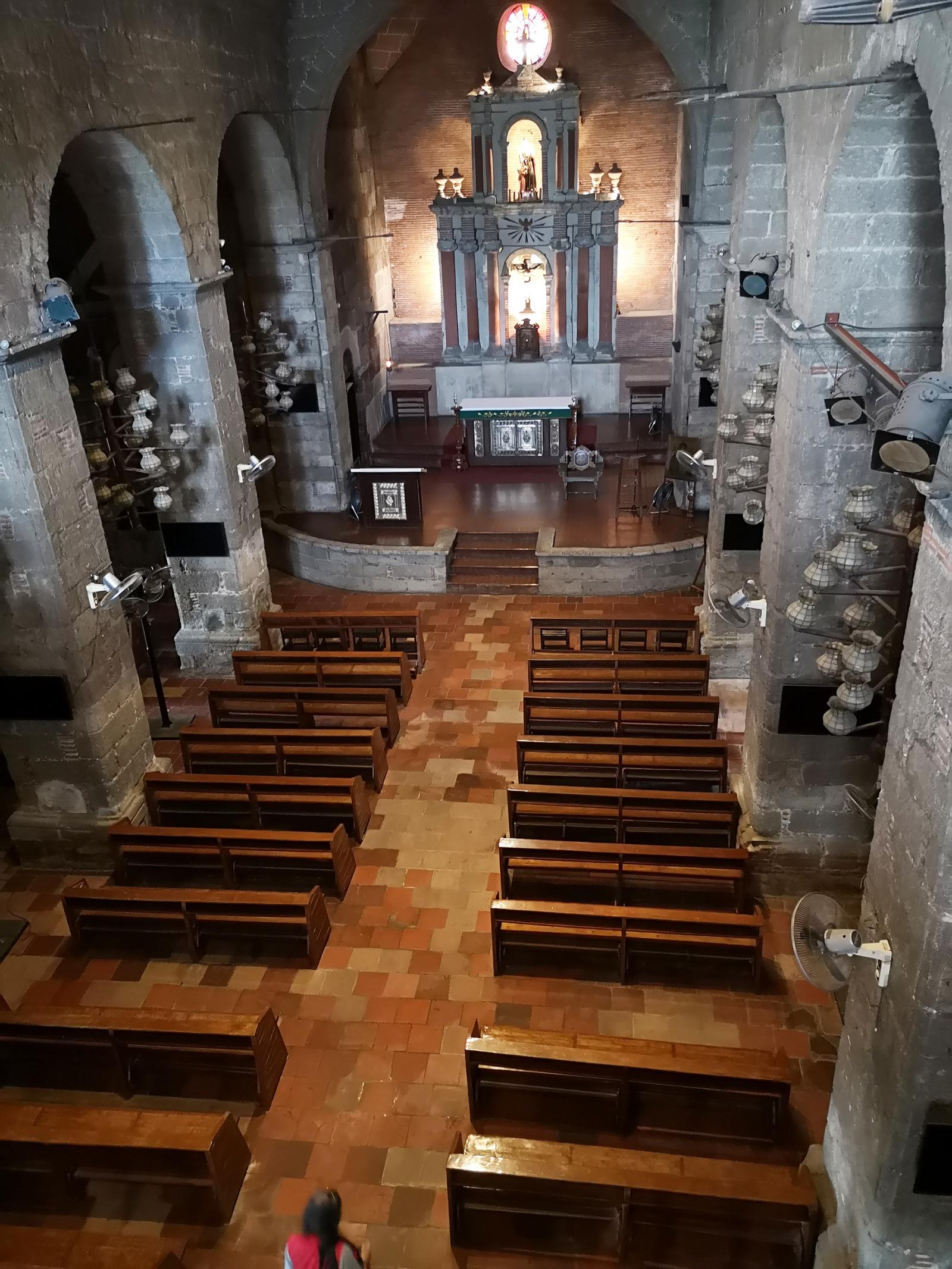 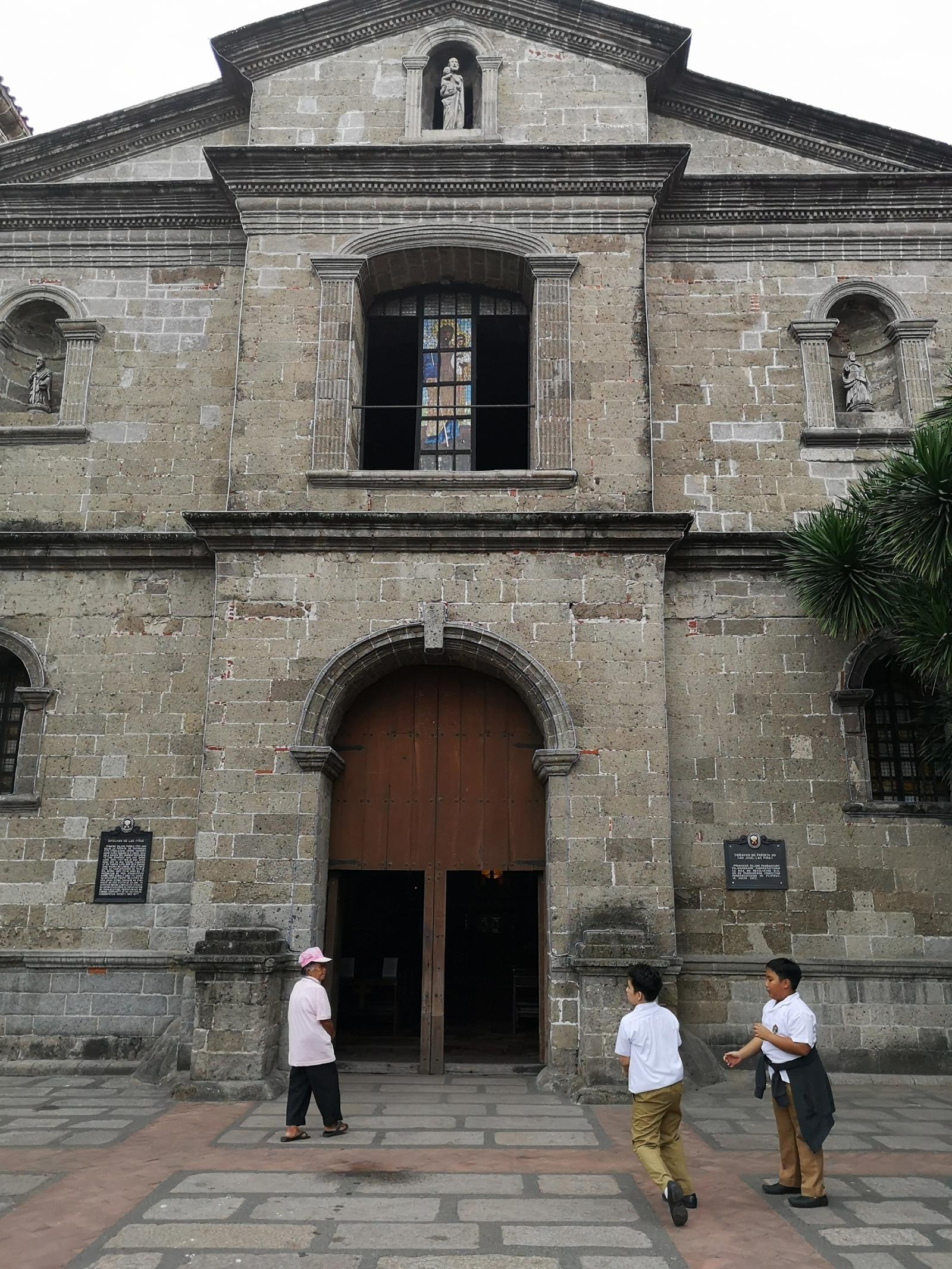 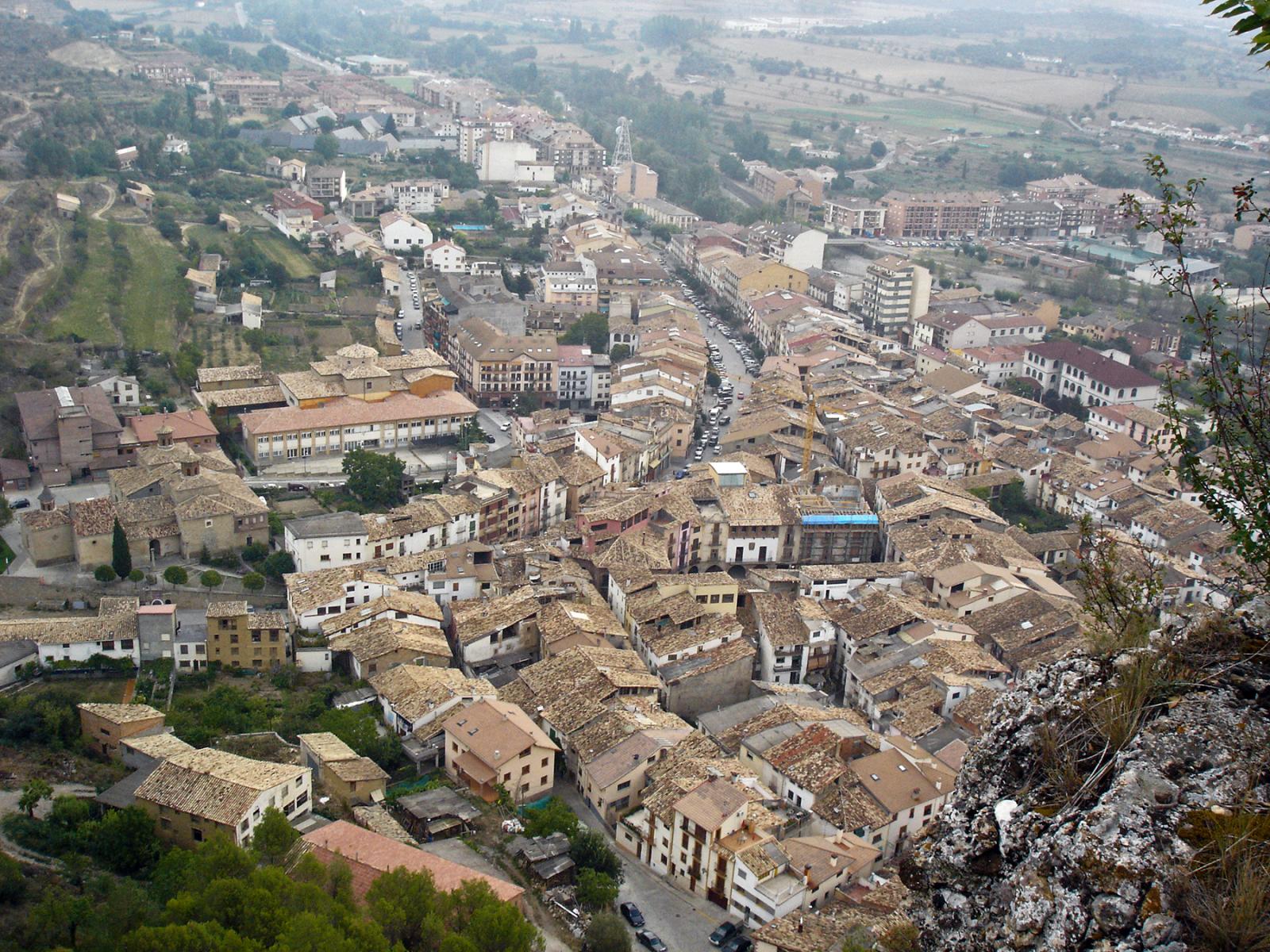 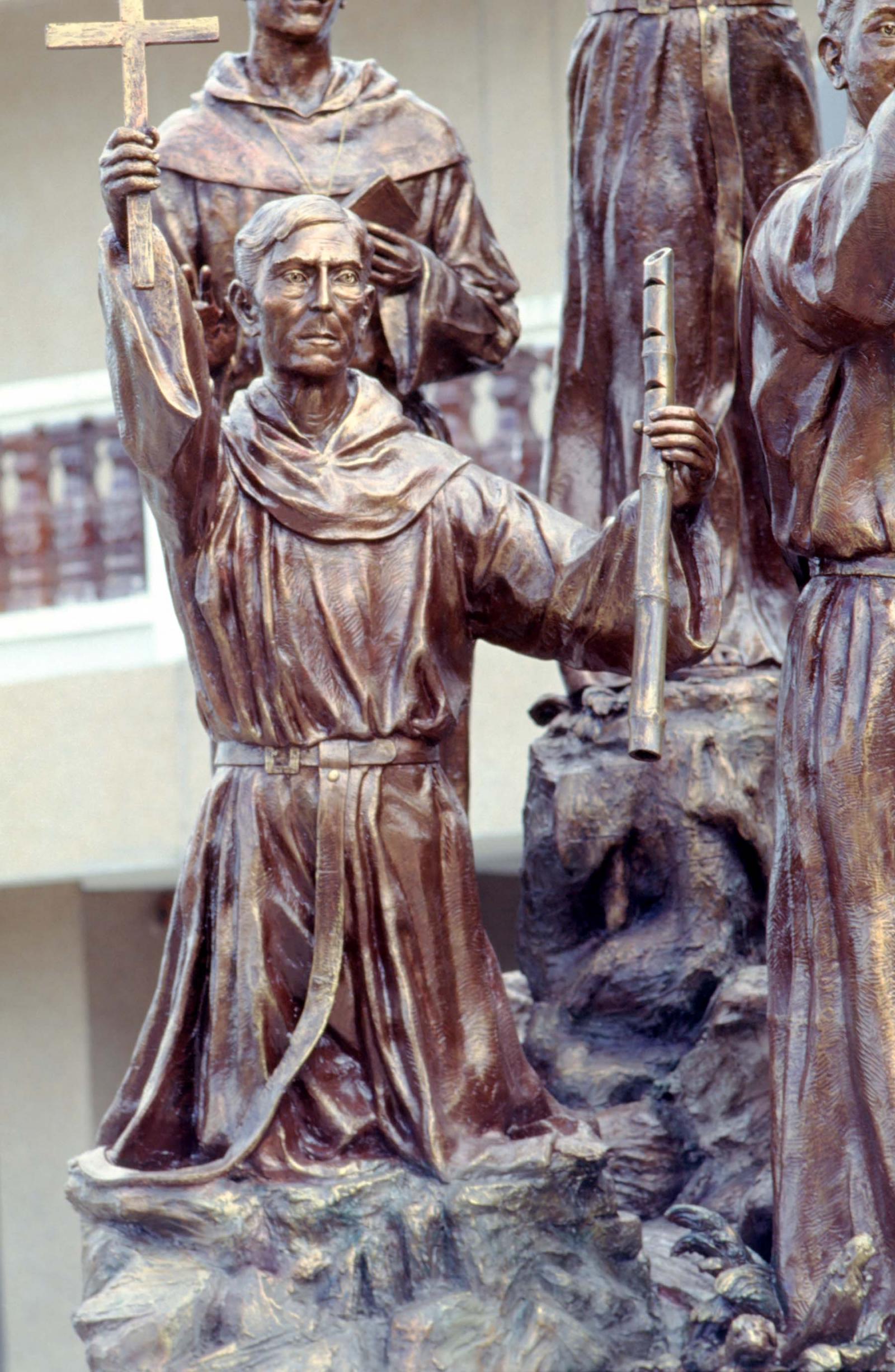 As we celebrate the 400th anniversary of the birth of the Province of San Nicolás de Tolentino, it feels obliged toremember its most famous children, among whom is Diego Cera de la Virgen del Carmen, who has become famous forthe bamboo organ of Las Piñas, Philippines, but made many other merits to remember it not only in the Augustinian-Recollect Family, but also in the Philippines and in the world of culture in general.

The Cera Badía family and Diego's entry into religious life

The town of Graus (Huesca, Spain), which currently has about 3,500 inhabitants was the birthplace of Diego, who was born on June 26, 1762. His parents were Joaquín Cera and Francisca Badía. Now there is no more data on thisfamily. Local historians claim that the family owned a cabinetmaking workshop in Graus.

There is no more news of Diego until in January 1786 he entered the convent that the Augustinian Recollects had inBenabarre (Huesca) about 48 kilometers from Graus. De Benabarre was sent to the convent of Santa Monica inBarcelona. Diego was 24 years old when the novitiate began in Santa Monica. The following year 1787 he made thesimple profession of vows, on January 30 and stayed for a while in Barcelona.

In those years, in the kingdom of Aragon and in other provinces of Spain, music schools abounded in cathedrals,collegiate and other centers, in which free classes were taught. There were also free workshops to learn how to makemusical instruments. There were many opportunities to learn theoretical and practical music. There were also plenty oforganists who prepared their students and then went out to all over Spain. In these teaching centers - workshops andmusic schools - Diego learned these arts that he could later practice and share in the Philippines.

All these studies and apprenticeships were carried out before entering the novitiate, because when entering the conventthere is certainty that he was already a good organist and there is no record that he studied these arts afterwards. Issuedhis simple profession and before enrolling in the XXV mission to the Philippines, he had to study philosophy andtheology for at least three years as a requirement for his ordination as a priest. The details of his ordination are notpreserved, but from the boat papers, it is known that he was ordained a priest: he was a preacher and confessor.

On the way to the Philippines

From Benabarre Father Diego left for Cádiz on October 15, 1790. In Cadiz he met with the other thirteen volunteers.They stayed in Seville in the recollected convent of Nuestra Señora del Populo. They left Seville for Cadiz and fromhere sailed for Veracruz, Mexico, on December 3, 1790, on the merchant ship El Águila. They arrived in Veracruz onJanuary 30, 1791. In Veracruz, Mexico City and Acapulco they spent a year waiting for the next galleon bound forManila. In Acapulco, two priests and a religious brother joined the mission. From Acapulco they set sail in the galleonSan Andrés, and after about three months by the immense Pacific Ocean, they reached the Mariana Islands. The lasttwo priests added to the mission were destined for the Marianas, entrusted to the Recollects since 1768. They stayed inGuam for a few days with the missionaries and again continued across the Pacific in the direction of Manila. They arrived at the beautiful bay and port of Manila on June 5, 1792.

From the port the religious continued to the convent of the Recollects, in Intramuros, located very close to the port ofManilense. The church dedicated to St. Nicholas of Tolentino in Intramuros was beautiful, spacious, and very popularfor the devotions practiced there.

The beautiful church of St. Nicholas lacked a pipe organ. Father Diego soon began building a new one. But, as anewcomer to the Philippines, he had to familiarize himself with local materials needed for the construction of the organ.He also had to prepare workers to help him with the task. The Chronicles recount that he finished this organ inIntramuros in a single year: 1793-1794. It is understood that he finished some basic records for use in the liturgy,because it was impossible to finish it completely in a year and almost himself. He worked tirelessly, hard, with greattenacity and several chroniclers claim that he finished it in 1798.

What did end in 1793 was an instrument that some chroniclers talk about: some say it was a pianoforte, others abamboo organ. It was an exquisite gift and was sent to the Queen of Spain: Maria Luisa of Parma, consort of CharlesIV. It cannot be specified what instrument it was, but it is known that the queen received it and very gratefullycorresponded with a chalice and gold cruets and a bell. All this is still preserved in the church of Las Piñas.

In June 1794 Friar Diego was posted to the parish of Malabacat, about 100 km north of Manila. There he was officiallypastor from June 9 to December 26, 1794. It is recorded that he was back in Manila in 1795 and that he was proposedfor the shortlist of a new Parish: San José, in Las Piñas. He was assigned as the first parish priest of Las Piñas. He took possession of the parish on December 26, 1795.

Although residing in Las Piñas, he moved to the church of San Nicolás Intramuros, where the organ was already quiteadvanced and in service, but not yet finished. The year 1798 he finished it completely, traveling from Las Piñas, whichis about ten miles from Intramuros. The chroniclers say that the organ was beautiful, grandiose, monumental. It lastedin very good shape for about a hundred years, until the Philippine revolution in 1898. It was partially fixed, and so itlasted until the American bombings of Manila in the Second World War destroyed almost entirely the church of SanNicolás Intramuros.

Father Diego began to work in Las Piñas to get out of the poverty in which he found the new Parish. He revealed himself for the well-being of his faithful. He bought the land for a new church. He endowed the church with a smallorgan.  He started a parish choir, made string and bamboo instruments for bands and orchestras so popular in thePhilippines. He bought everything necessary to celebrate the liturgy with dignity: he enriched the church withornaments, statues, and his last jewel the bamboo organ.

The bamboo organ for the Parish of Las Piñas

In 1802 he was commissioned to manufacture an organ for the cathedral of Manila. Having completed this work, ofwhich no details are preserved, he finished his parish church again. To build the first church, the government had tohelp with workers, materials, payments... None of this was obtained by Friar Diego. The Province of St. Nicholas hadto come out on top, and the diocesan bishop always helped.

With his work and these aids, he managed to finish the church and start another project for his Parish: to build a largebamboo organ. So, in 1816 he began to cut the bamboo reeds. He buried them for a year or so. We don't know if headded any more treatment to protect the weevils. The organ took him eight years to make; the last touches were givenin 1824, with the installation of metal trumpets on the main façade. Thus, began life the bamboo organ of Las Piñas.But soon came the dangers: waters, earthquakes... Father Diego was the first organ builder who had to plan on thebamboo organ built by himself, due to a downpour and an earthquake in 1829. For the church's arrangements caused bythese natural disasters, he did get the help of the government.

From the different visits of the diocesan bishop we know the praises given to Father Diego for his dedication and care,as pastor. There they are written for perpetual testimony of the first parish priest recollected. He was well liked by hisparishioners. It brought together the spirits of the parishioners around the church and its bamboo organ, and they arevery proud to have participated in its construction and to have it now in their church as a National Treasure.

In addition to his skills as a parish priest and organ builder, Diego was a multifaceted man in his works, as diverse asbuilding the parish church of San José, intervening in the construction of two bridges, raising the plan of the city of LasPiñas, cataloging metals, minerals, plants, trees of the Philippines; make important arrangements in the recollect haciendas of Imus and Muntinlupa; understand in the cultivation and treatment of the skins, and dry cleaning ... Forhis many merits he was decorated with the gold medal of King Charles III.

To Diego the Order entrust several commissions: he was elected provincial councilor and several times prior. On May15, 1832, being prevented by illness to continue in his post as parish priest, with great regret, he resigned. He left theParish of Las Piñas and took possession of the priory of the convent of San Sebastián, in Manila. Very soon the diseaseworsened and having received the holy sacraments with great devotion, he left for the eternal homeland. A life full oflove for God and neighbor. It was June 24, 1832. Fray Diego finished his life given to God in a poor village, which hasgrown immensely; today Las Piñas has more than half a million inhabitants, is part of the metropolis of Manila andbelongs to the Diocese of Parañaque.

P. Diego was almost seventy years old. He had been pastor about thirty-seven. He died, but his works are still alive.Today everything around his parish has taken on a historic level, sponsored by the Philippine Government that wishesto preserve the colonial flavor, and has declared a Historic Corridor that includes the church, the bamboo organ, andtwo bridges of Las Piñas. The church and bamboo organ have been declared a National Treasure of the Philippines.The national highway leading to Las Piñas is now called Avenida Padre Diego Cera. Las Piñas is a world-famouscultural venue for the musical week: Bamboo Organ Festival.