Pastoral visit in Labrea (1/2): "I fed the Pope's invitation to dream... And I dreamed of visiting all the parishes, and little by little that dream took shape until it became a reality..."

The Augustinian Recollect bishop of Lábrea, Santiago Sánchez, accompanied by the delegate of the Province of San Nicolás de Tolentino in Brazil, Juan Cruz Vicario, and by the member of the Recollect community of Lábrea, Miguel Ángel Peralta, has been able to make the pastoral visit to the parishes located near river Purús below Lábrea, repeatedly canceled by the pandemic. 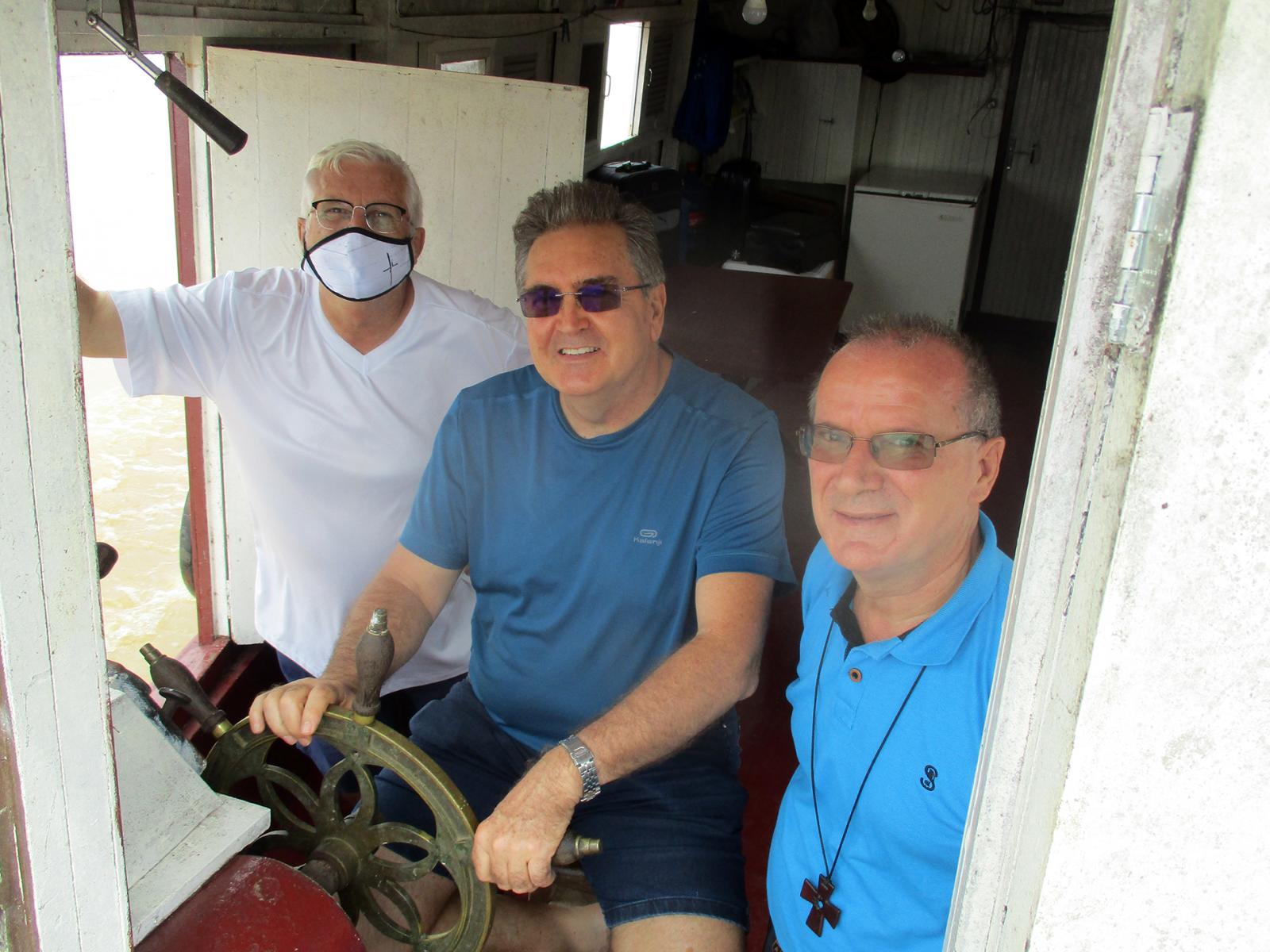 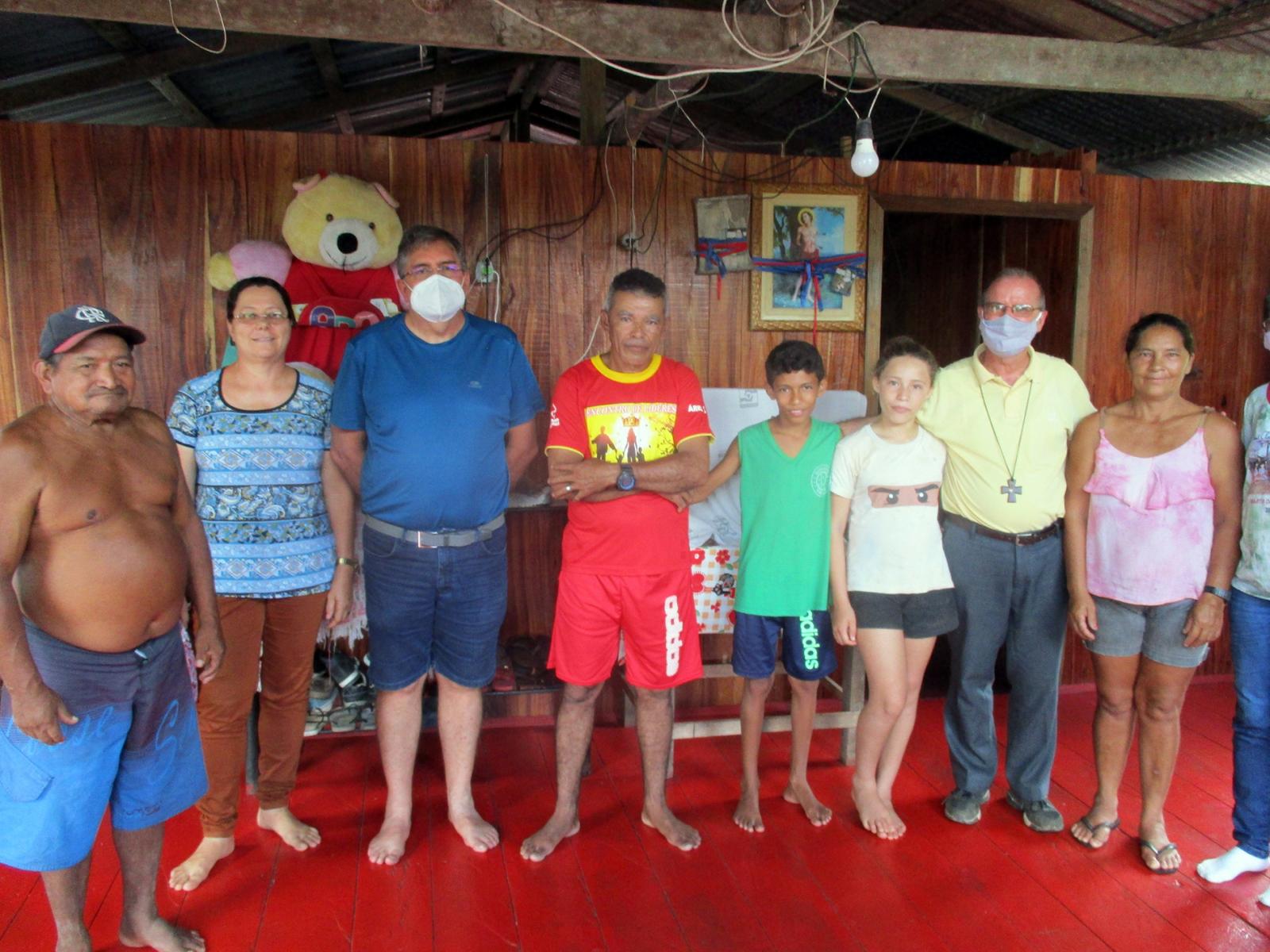 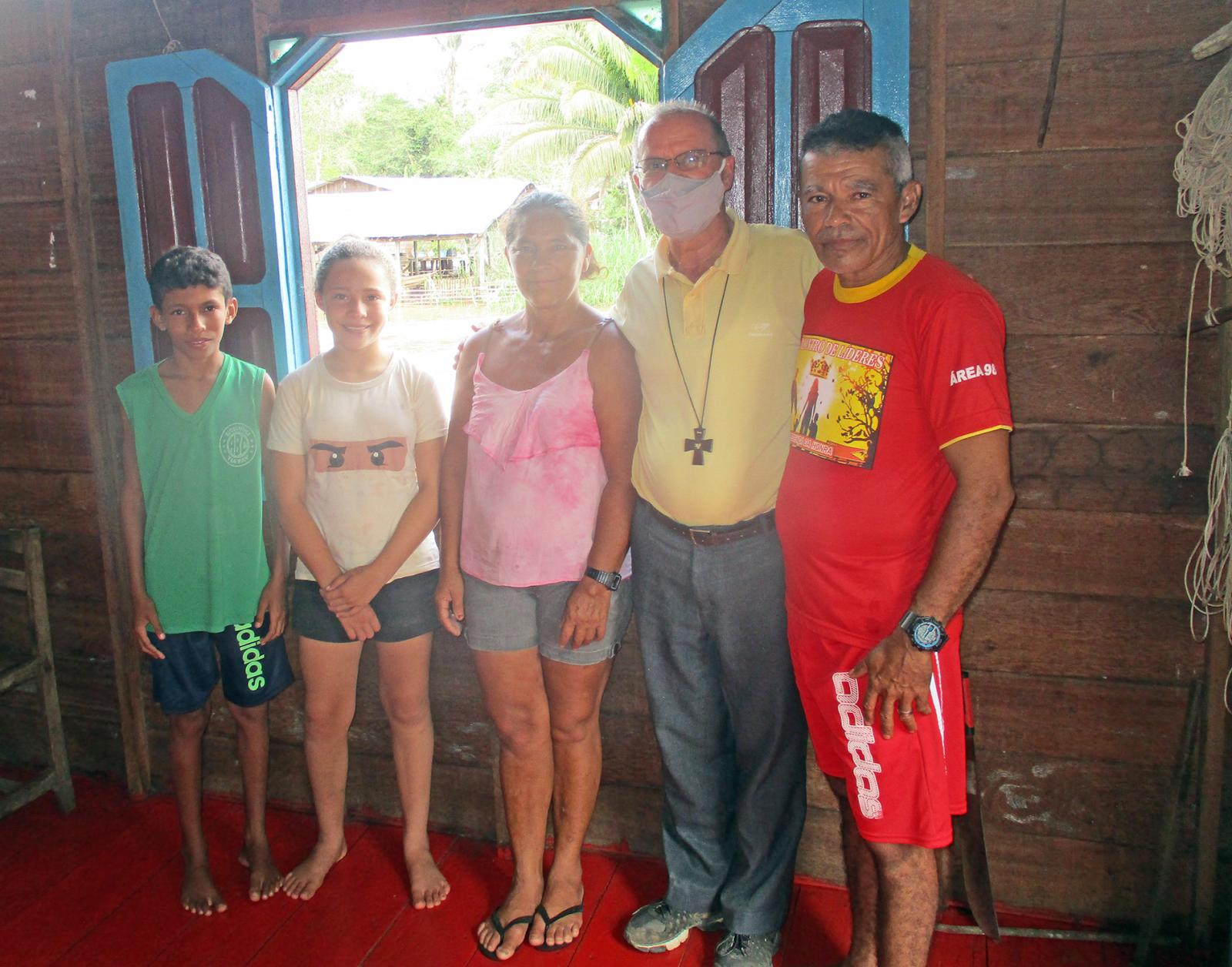 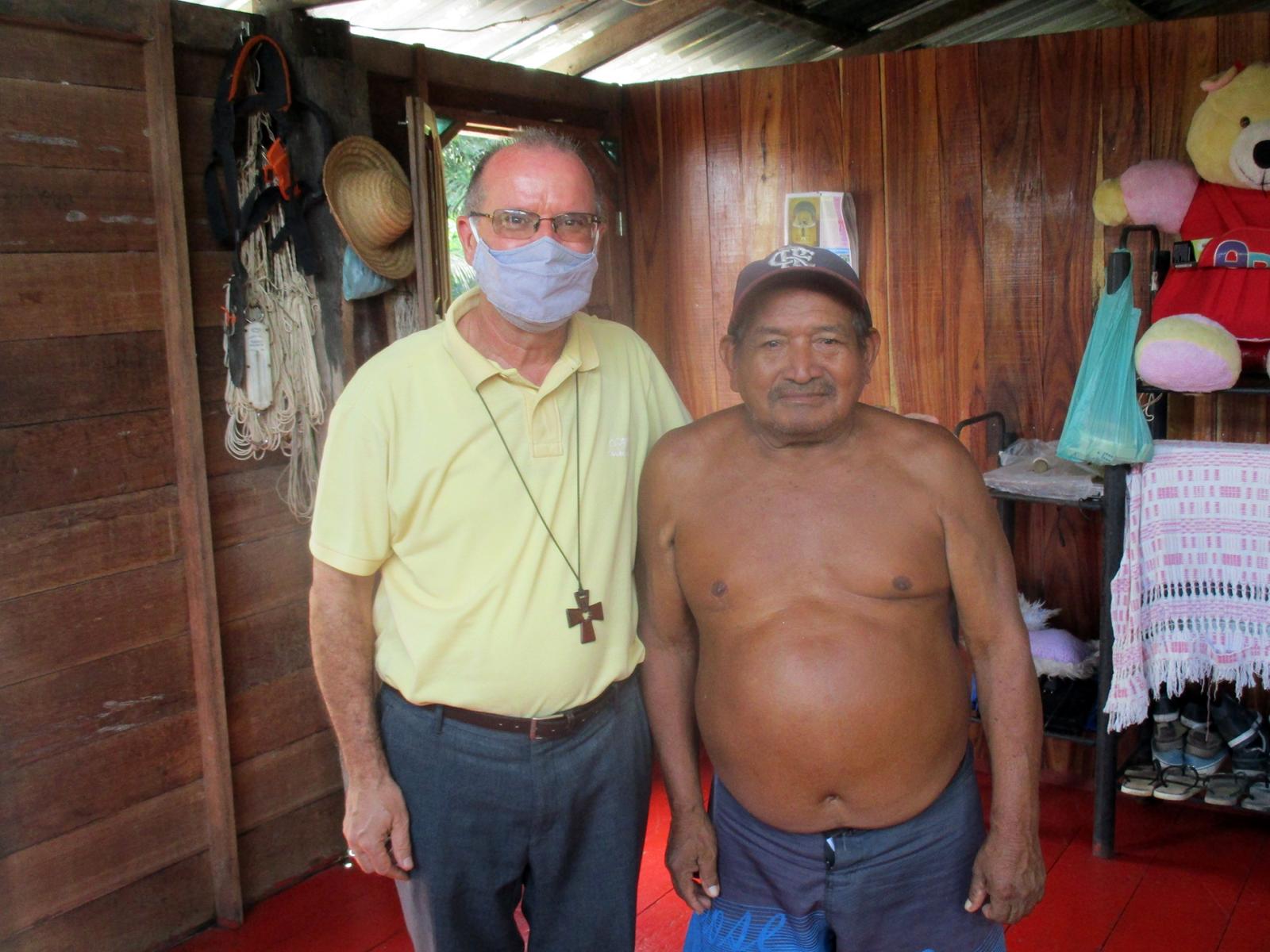 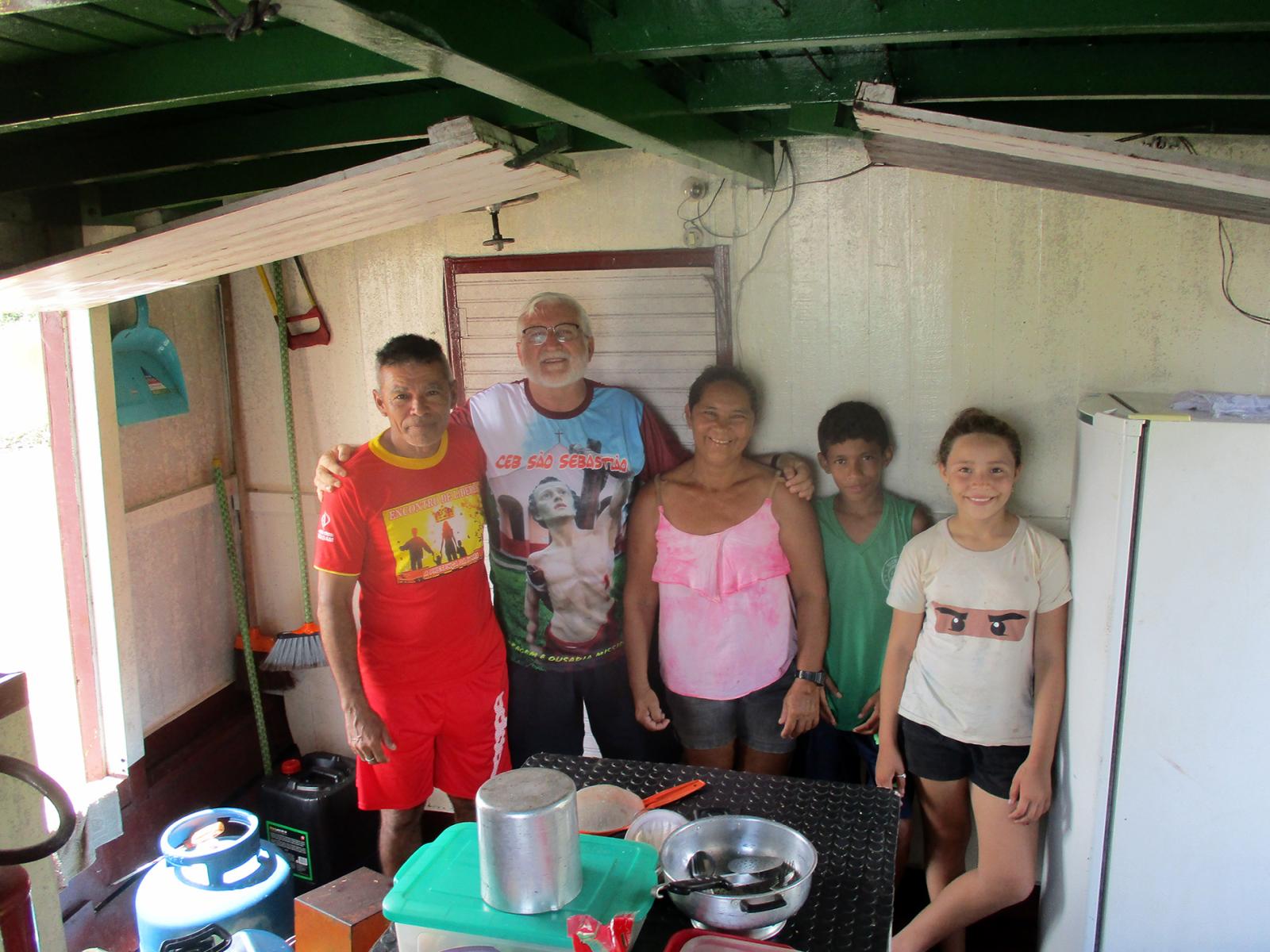 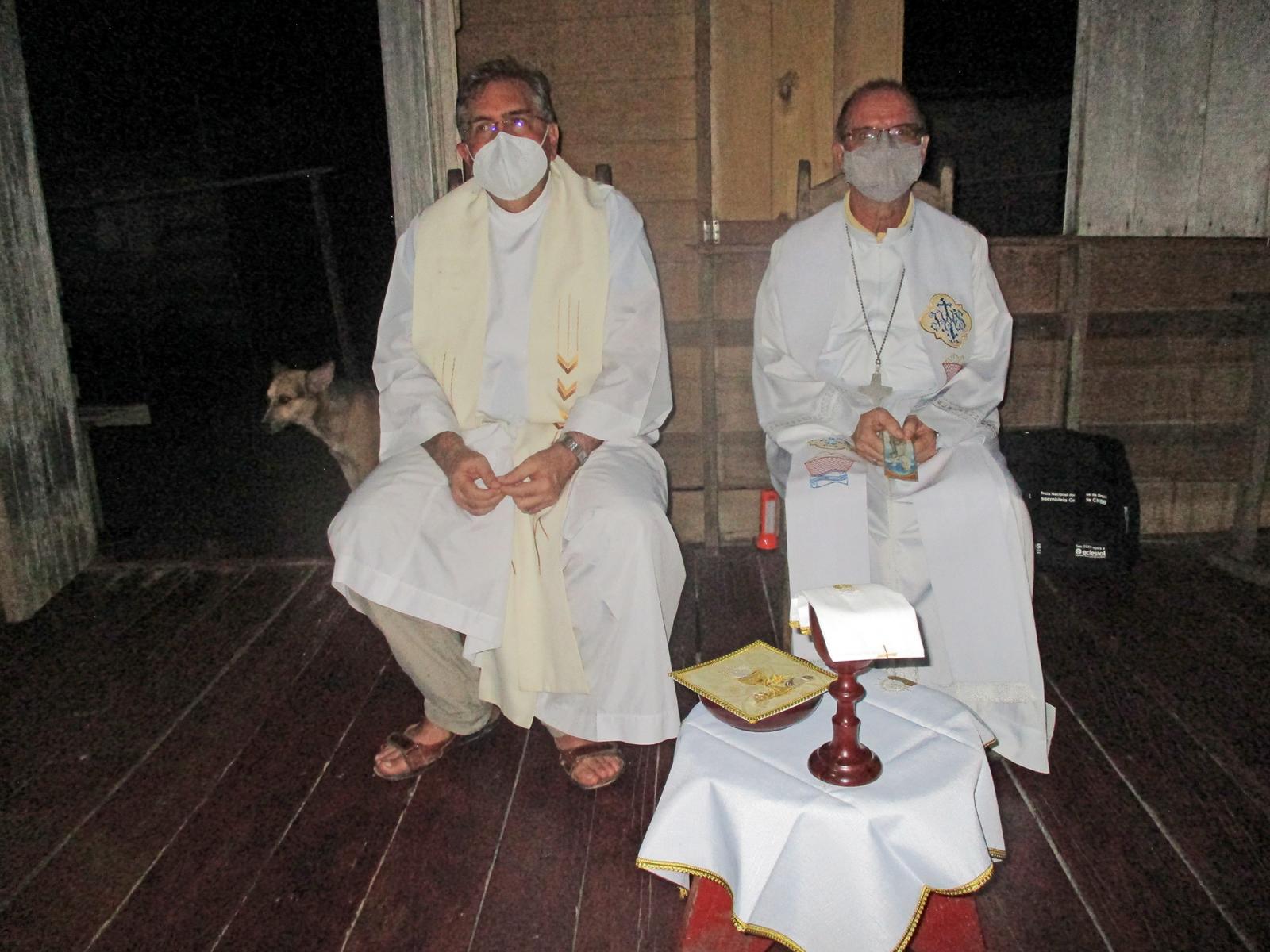 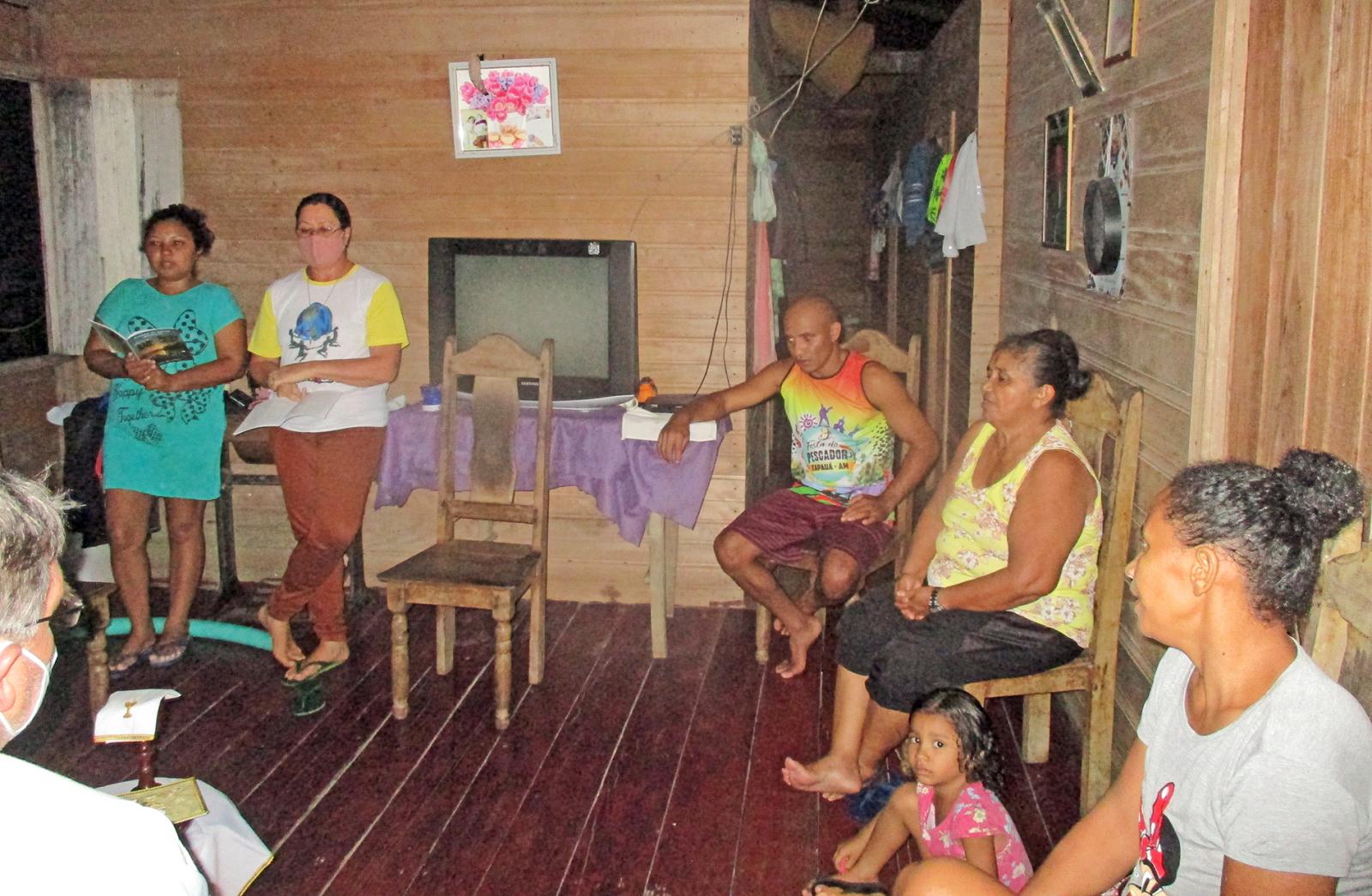 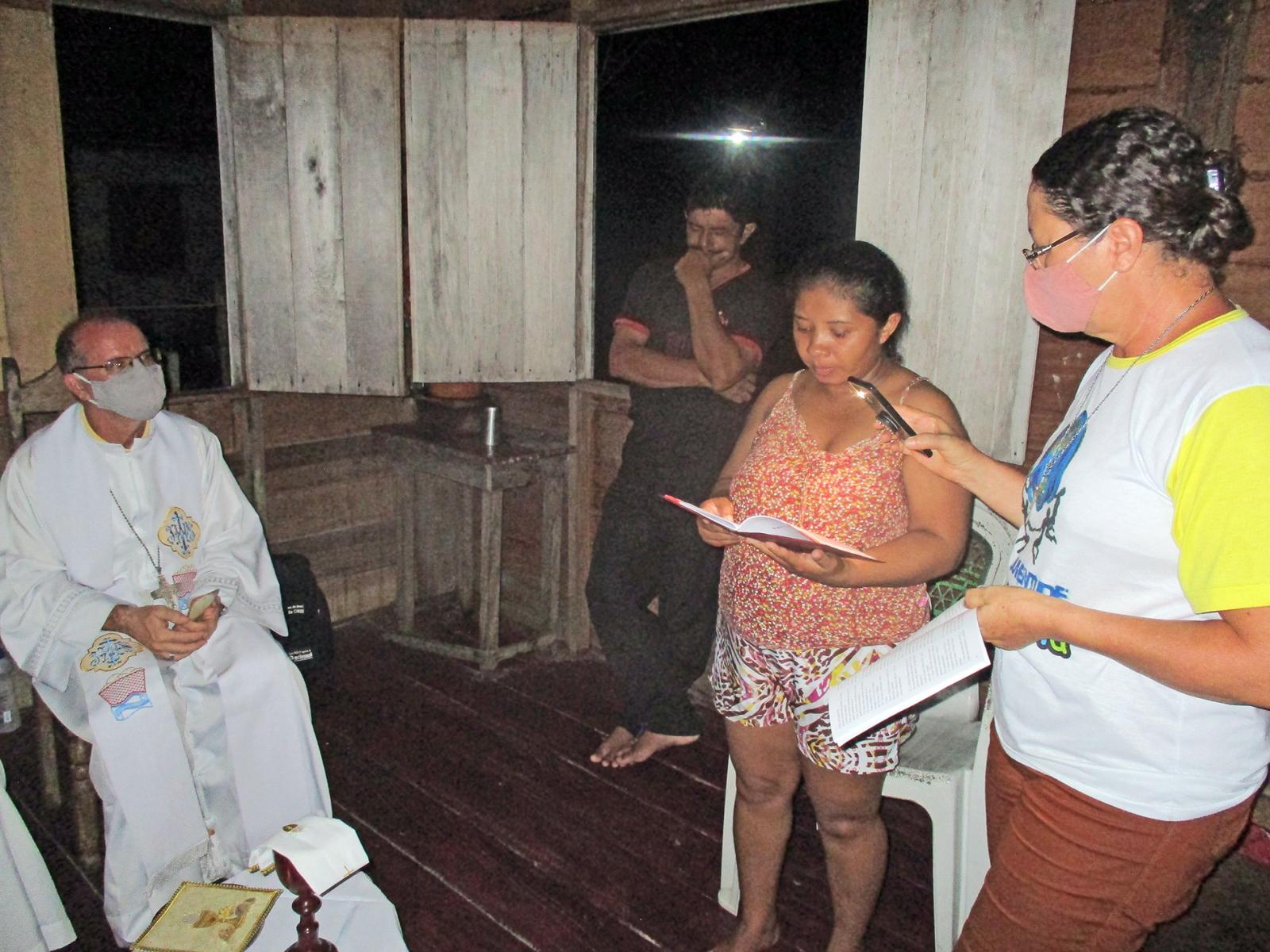 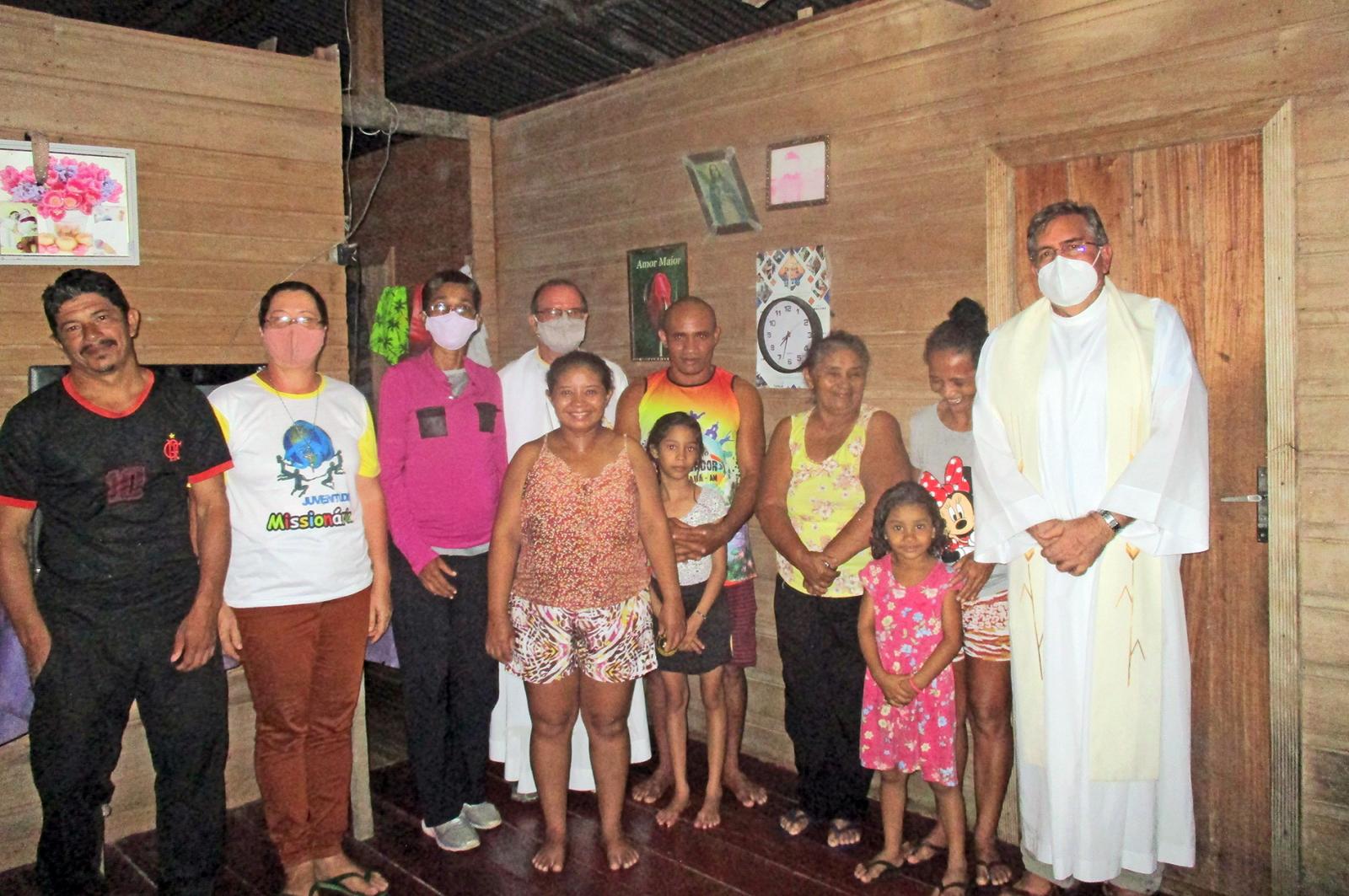 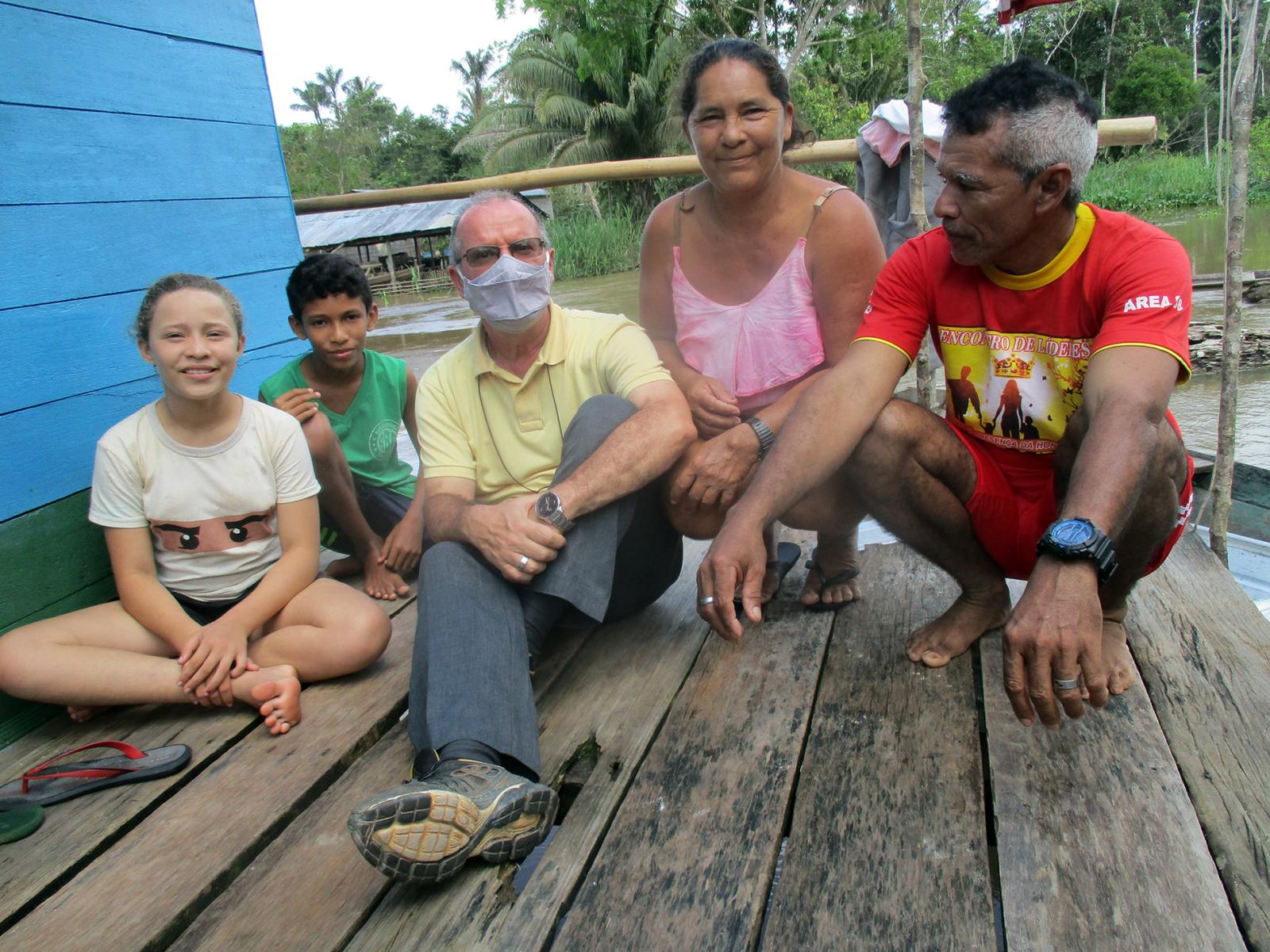 The pandemic  kept us isolated at the headquarters of the Prelature of Labrea since 2019. Taking advantage of a partial release from mobility restrictions in January 2020, I made a visit to  Pauiní, to the San Augustin Parish, located south of Lábrea  and upstream of the  Purús.  But it was not possible to make it to the rest of the Prelature, to the parishes located to the north, downstream of the Purús towards its mouth in the Solimões-Amazonas,  because soon the restrictions returned.

My plan to visit the Parishes twice a year was not achievable.  So, during this time, reading exhortation, I fed his invitation to dream... And I dreamed of visiting all the parishes, and little by little that dream took shape until it came true...

Father Éder Carvalho, pastor of the new Parish of San Sebastián y San Francisco, founded in  February 2020, with headquarters in Belo Monte (Canutama) and  Foz de Tapauá (Lábrea), started a project like the Esperanza Centers,called Proyecto Gabriela, and wanted to do it on San José Day. The project is led by the religious Josefinas resident in Belo Monte.

Around that axis the trip was woven:  if I had to go to Belo Monte, I could visit the Parish of San Juan Bautista de  Canutama, and later to the other seat of the Parish of San Sebastián and San Francisco, Foz de Tapauá.

Commenting with the Augustinian Recollect Missionaries about the trip and the needs of managing logistics, it emerged that we could make the trip with the ship Regnum tuum of the Parish of Lábrea.

They are part of the so-called Pastoral das Curvas, the pastoral with the riparian and rural communities far from the urban centers.  If we were on the parish boat, the presence of the MAR would be very positive, so I invited them to accompany me and so we could also visit the Parish of Santa Rita de Tapauá. The northern map of the Prelature of Lábrea would be completely covered.

Knowing this, Friar Miguel Ángel Peralta, Augustinian Recollect of the community of Lábrea and good connoisseur of the river, its tributaries, and communities, lends himself to share the dream of this pastoral journey. We already have the travel plan and the missionary team!

The Augustinian Recollect Juan Cruz Vicario, delegate of the Province of San Nicolás de Tolentino of the Order of Augustinian Recollects in Brazil, was those days in the community ofLábrea on the fraternal visit to the community. He is also a good connoisseur of the entire northern route of the Purús, which would take us from Lábrea to Canutama, Belo Monte, Foz de Tapauá and Tapauá.

He had to go back to Manaus, and that's the same route that ships go to the Amazonian capital. He signed up for the pastoral visit, which in turn would serve him to return later to his community of residence.

We left on April 29th. The Augustinian Recollects Luis Amílcar Reyes and Ivanderlei Ribeiro, from the community of Lábrea, were present at the sending prayer on the ship Regnum Tuum.  At 6 in the morning, with the first rays of the sun, we began the pastoral journey with Commander Abinaid at the controls of the ship and his son  Alex  as assistant.

We stopped 24 hours in Canutama, where we took the opportunity to solve bureaucratic issues.

We continued our journey downstream and on the afternoon of Friday, April 30 we were greeted with music and flags in Belo Monte, co-headquarters of the Parish of San Sebastian and San Francisco.

Father Éder Carvalho, sisters Josefinas Claudia, Ana and Merinalva, the lay coordinator of the local grassroots community and a good group of faithful welcomed us.  A Eucharist followed where we were given the floor to the five members of the missionary team of the pastoral visit.

On day 1, the feast of St. Joseph the Worker, in the Josephine Year, at 8.00 in the morning, and within a very solemn Eucharist, the socio-educational project was also presented with the blessing of the beneficiaries. The project begins timidly with 11 girls, representatives of the most vulnerable population.

The families of the eleven beneficiaries and the social project team were present in a special place. Everything was very simple to not congregate many people. We also visited the place where the educational tasks will be carried out.

The rest of the day was spent with the tasks of a pastoral visit of the bishop: meeting with the parish priest, with the religious community of the Josephine’s, Claudia, and  Ana, with the Parish Pastoral Council, visits to the sick, directing and resolving bureaucratic issues ...

We went to sleep on the boat Regnum Tuum, because the forecast was that at 4 in the morning the boat would start downstream from Belo Monte to the Foz de Tapauá.

It was Sunday, May 2nd and about 10.00 in the morning we arrived at the community of Cassiã.  Now we were a retinue of two boats, the Regnum Tuum and the boat of the Parish of St. Sebastian and St. Peter.

We celebrated the Eucharist in the chapel, dedicated to the Divine Holy Spirit, and met with the entire local grassroots community in lively conversation and at a popular meal; the community is made up of houseboats that when the waters allow it because they are high (the flood period) are on the shore of a lake; as the waters go down in the dry season, they move the houses to the Purús.

After eating, we leave for the Foz de Tapauá. We were greeted in style, with rockets, music and a canoe waving the parish flags. This community has the characteristic of flooding completely in the period of high water, which is what we find.

It looks like a small wooden Venice and to move through its streets currently you need canoes; between the houses there are tables that act as a bridge. Only when the waters go down will there be streets again and you can walk from one place to another. That is why all the houses are raised with large trunks, in the form of stilts; when the river rises too much, you must put new soil at a higher altitude: they become houses that go up or down according to the needs and the level of the flood.

We went first to the community chapel, where the whole Catholic people were waiting for us. All members of the missionary team of the episcopal visit were again introduced.  During Sunday Mass she received the Celian Confirmation, an adult who had thus completed the entire process of initiation into the Christian life.

The usual activities of a pastoral visit followed: the meeting and dialogue with the parish priest, Father Éder and the team of the Josefine nuns  Merinalva and Doriña, who work in the Parish; the visit to the school and the nursery; private meetings with some people who had requested it...

In the afternoon we visit the neighboring community of Camaruã, where we also visit the works, they are doing there. We celebrated the Eucharist and then held a meeting with the few Catholics living in this community.

On May 4, after breakfast, we said goodbye to the management team of the Parish of San Sebastian and San Francisco and the people who came to give us their "see you later". The team of the pastoral visit continued downstream to Tapauá.

When leaving the Foz de Tapauá we started a long journey down the Purús River with time for contemplation, dialogue, and work on the boat. The municipality of  Tapauá, which we had accessed from the south, has an area like that of Portugal (almost 90,000 square kilometers) and the boat has a calm sail; going downstream is somewhat faster, and to the east almost all flooded there are shortcuts that cut between the curves of the Purús, but the speed never exceeds 40 kilometers per hour.

We stopped in the community —also flooded— of Tacacá and shared some time with the only family present at that time and an indigenous person.  When the waters are high, many of the inhabitants of the Purús go as far as the waters leave them in canoes, looking for the highlands, which are never flooded, to continue activities such as hunting, fishing, and the collection of extractivism of the jungle. When the waters go down, they will return to the banks of the main river.

We then stopped in the community of San Salvador where we celebrated a family Mass in which a stool was the altar. It is a joy then to take advantage of the moments given to us by the simplest people of the Prelature, who take aback to attend to the visitor and give him everything they have, a coffee and a conversation.