"Always on mission": a motto and logo for the Fourth Centenary of the Province of San Nicolás de Tolentino

Centenary of the Province of San Nicolás de Tolentino The logo and motto will accompany the celebration of the 400th year of this religious province, as well as the meaning of its different elements from September 10, 2020 to December 5, 2021. They come to show that these 400 years have passed between the fleeting and the permanent. 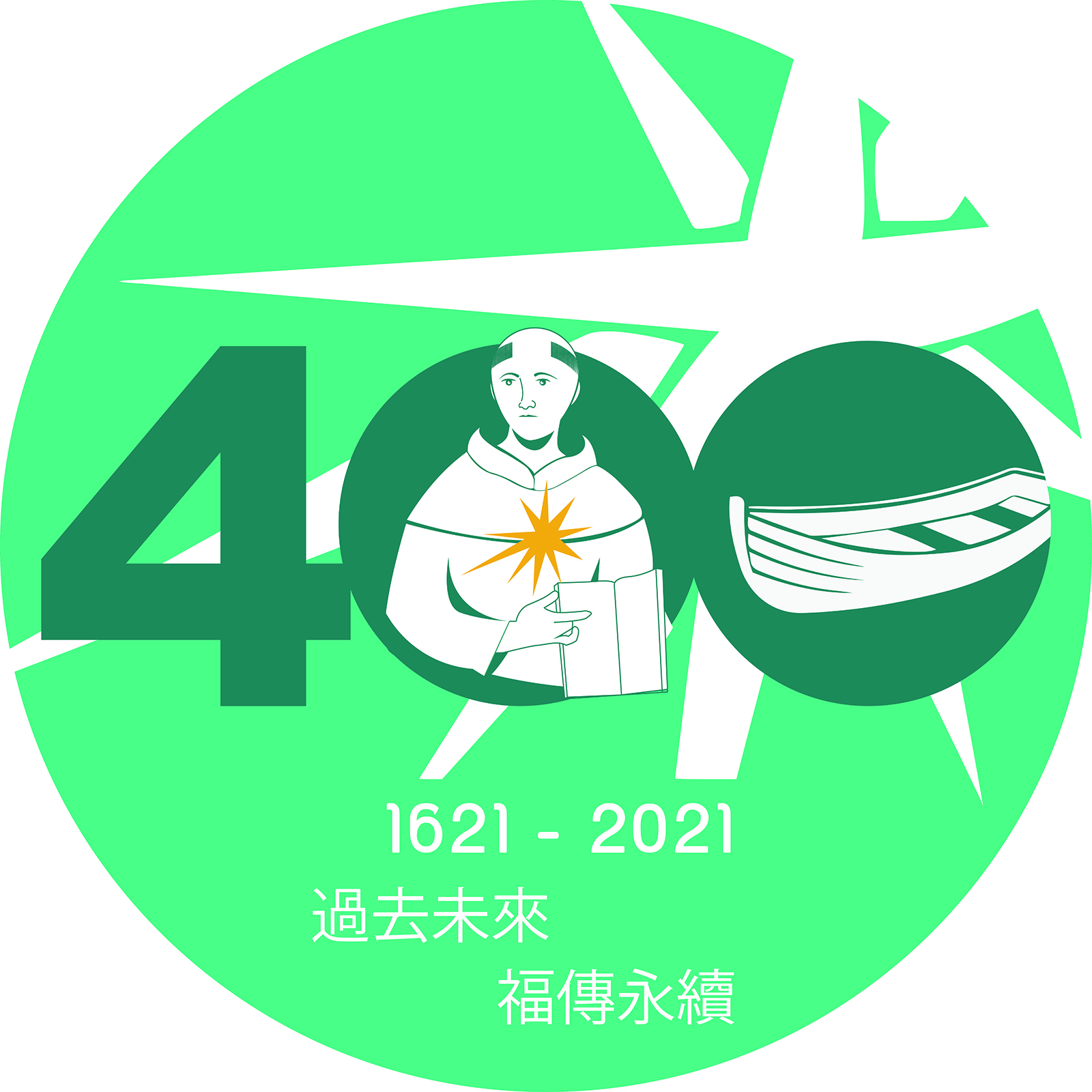 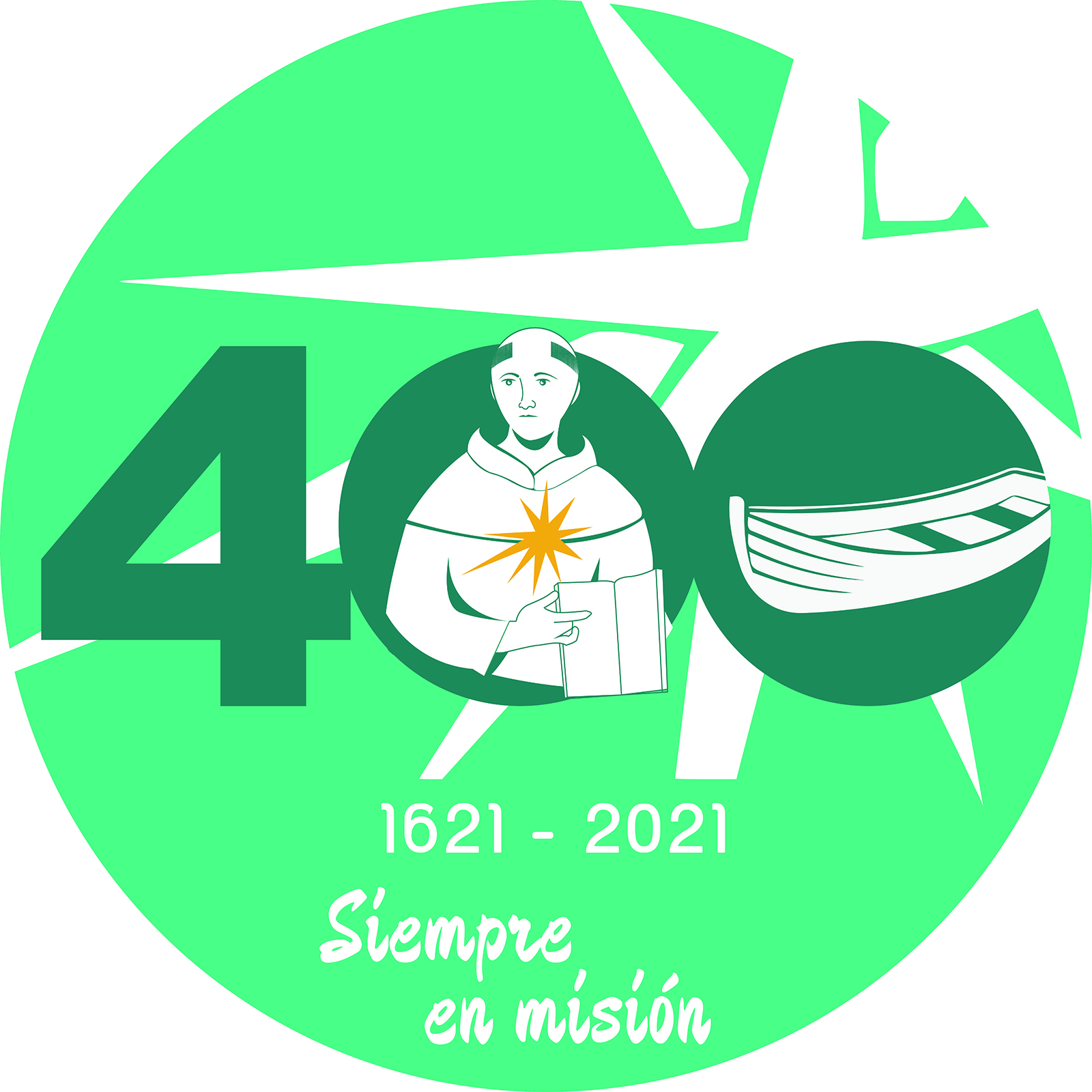 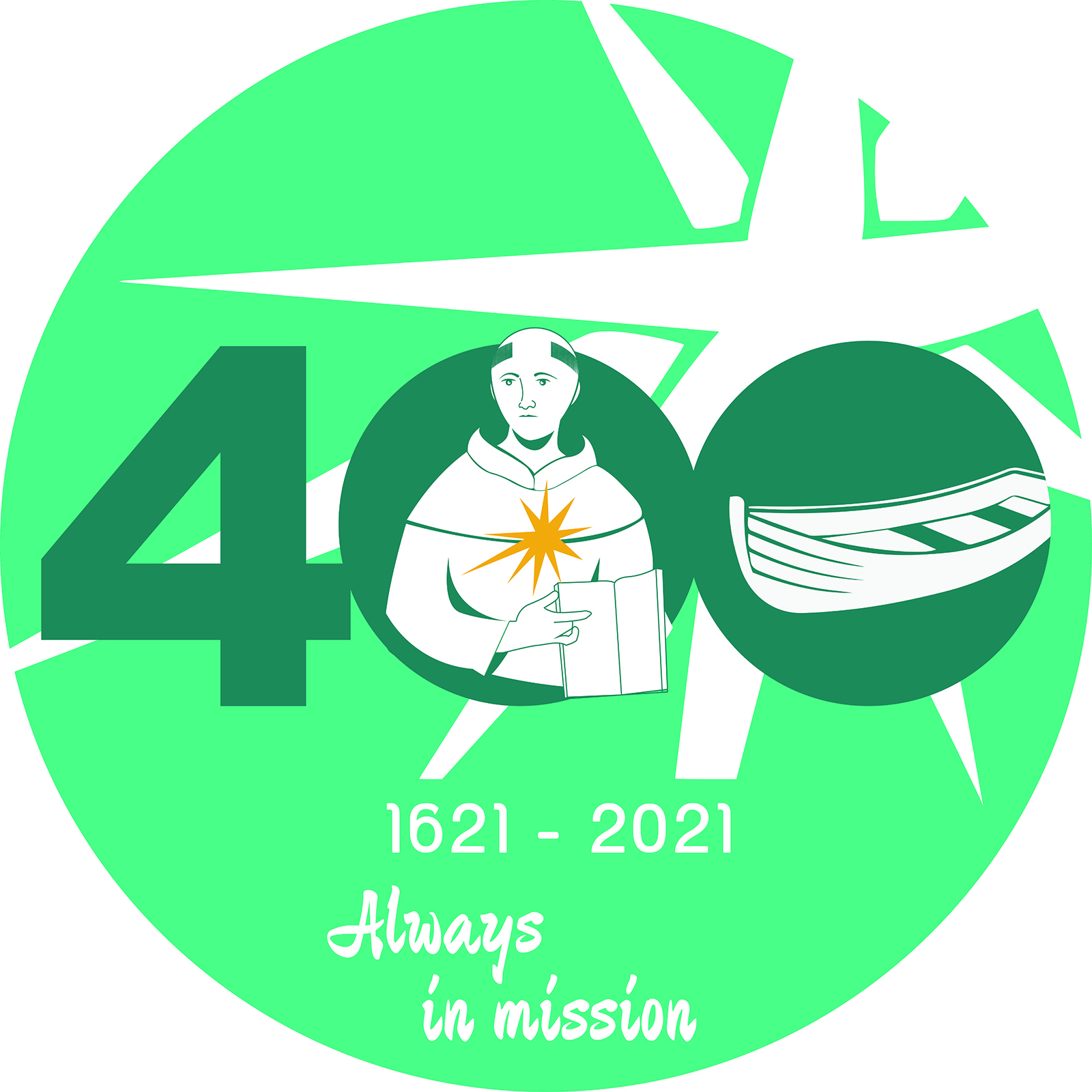 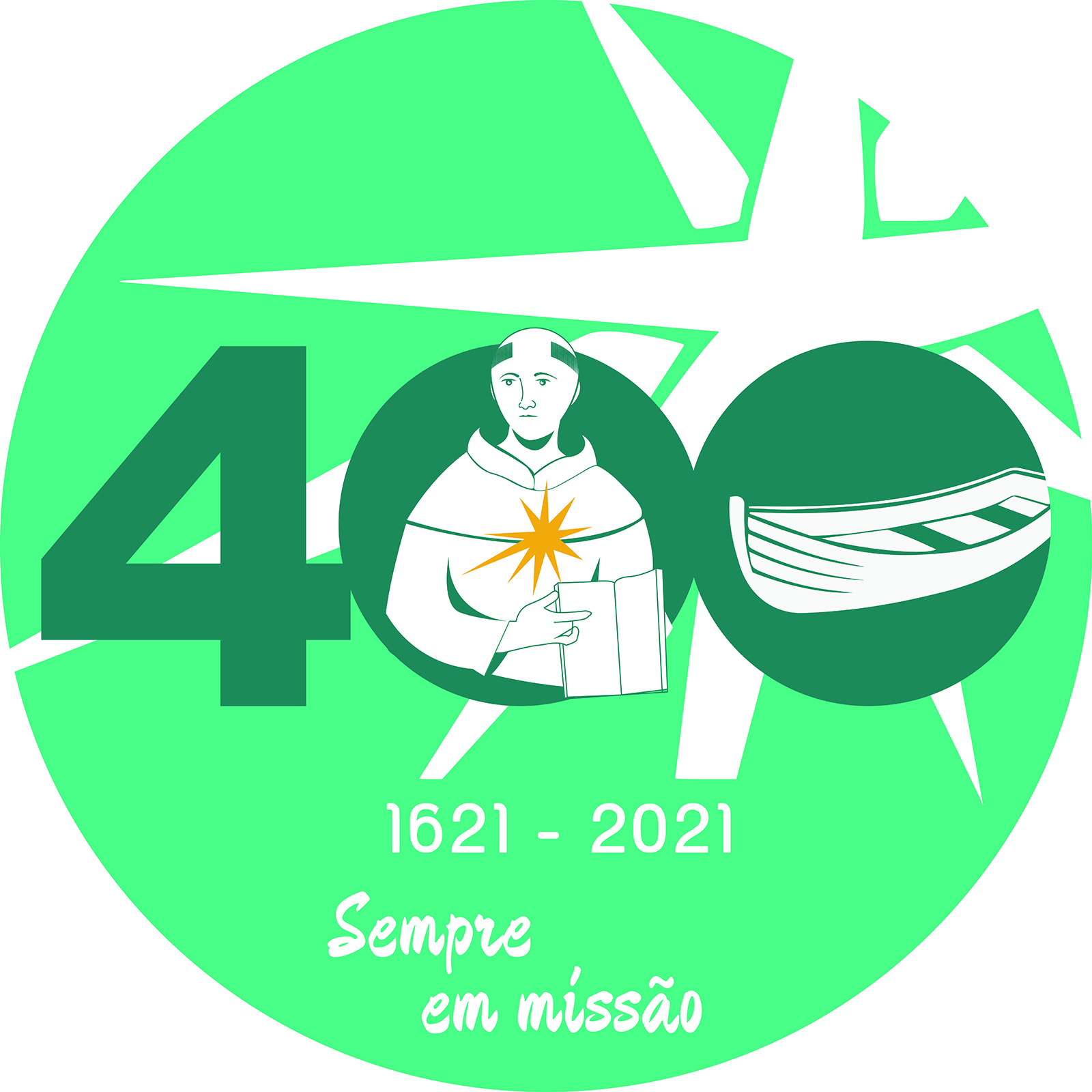 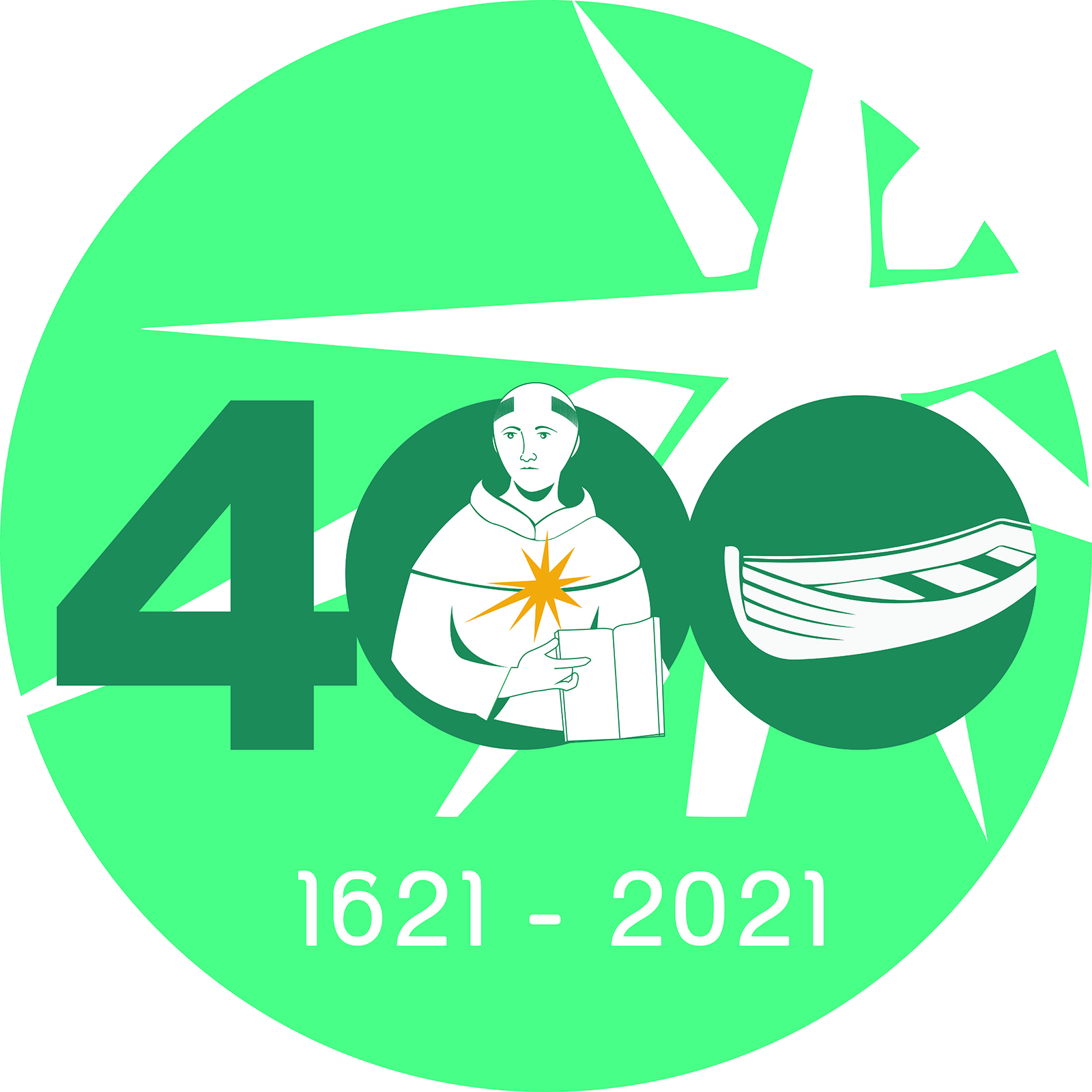 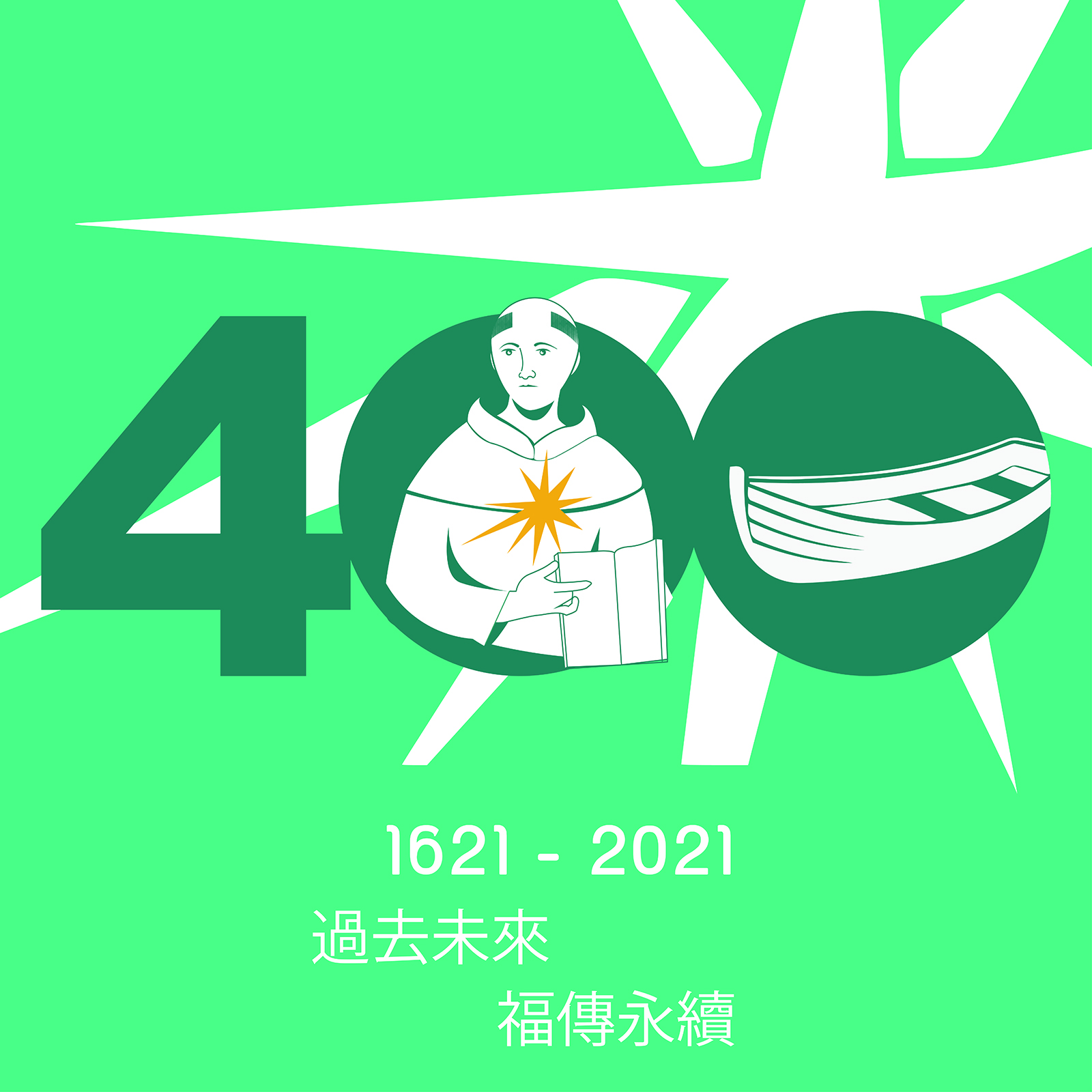 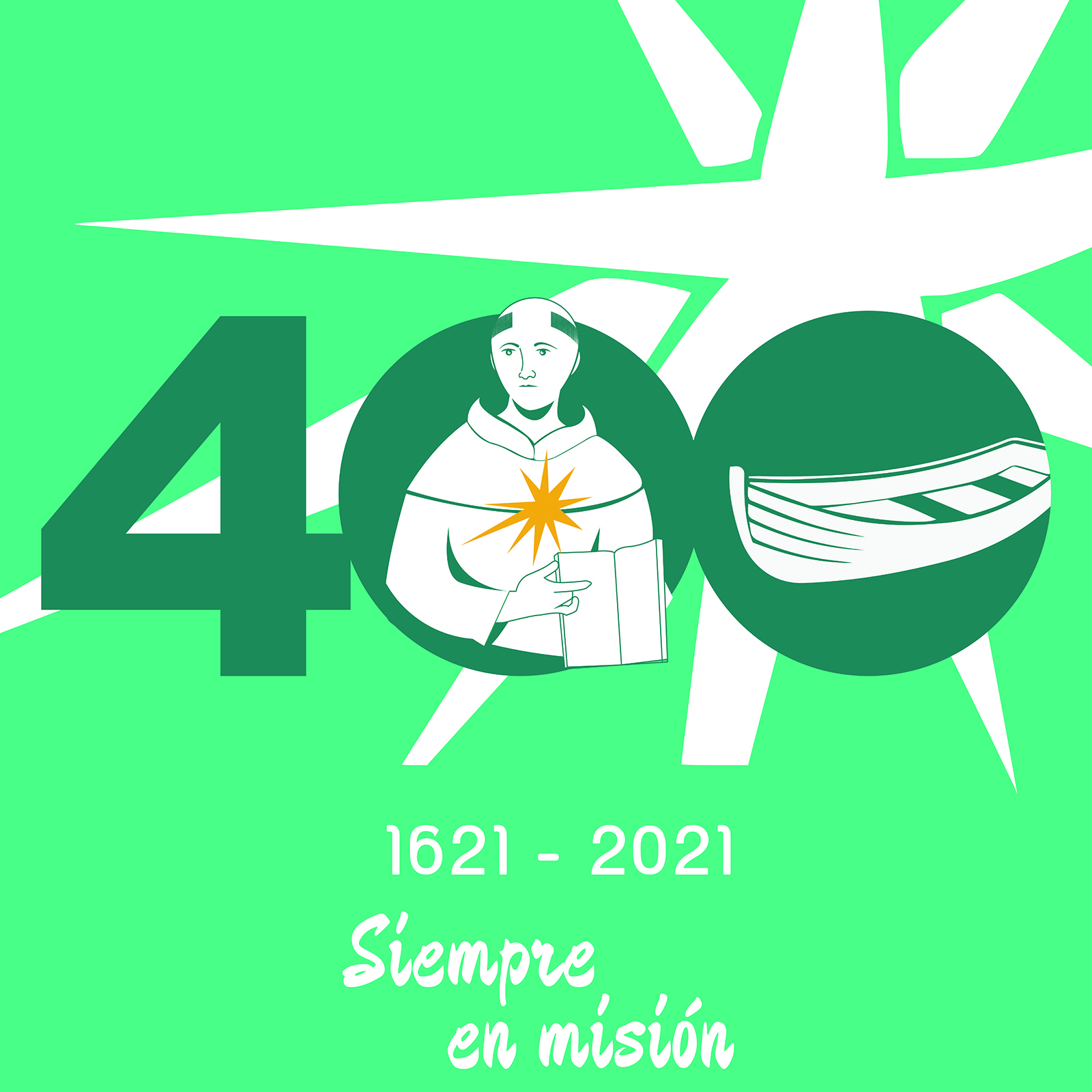 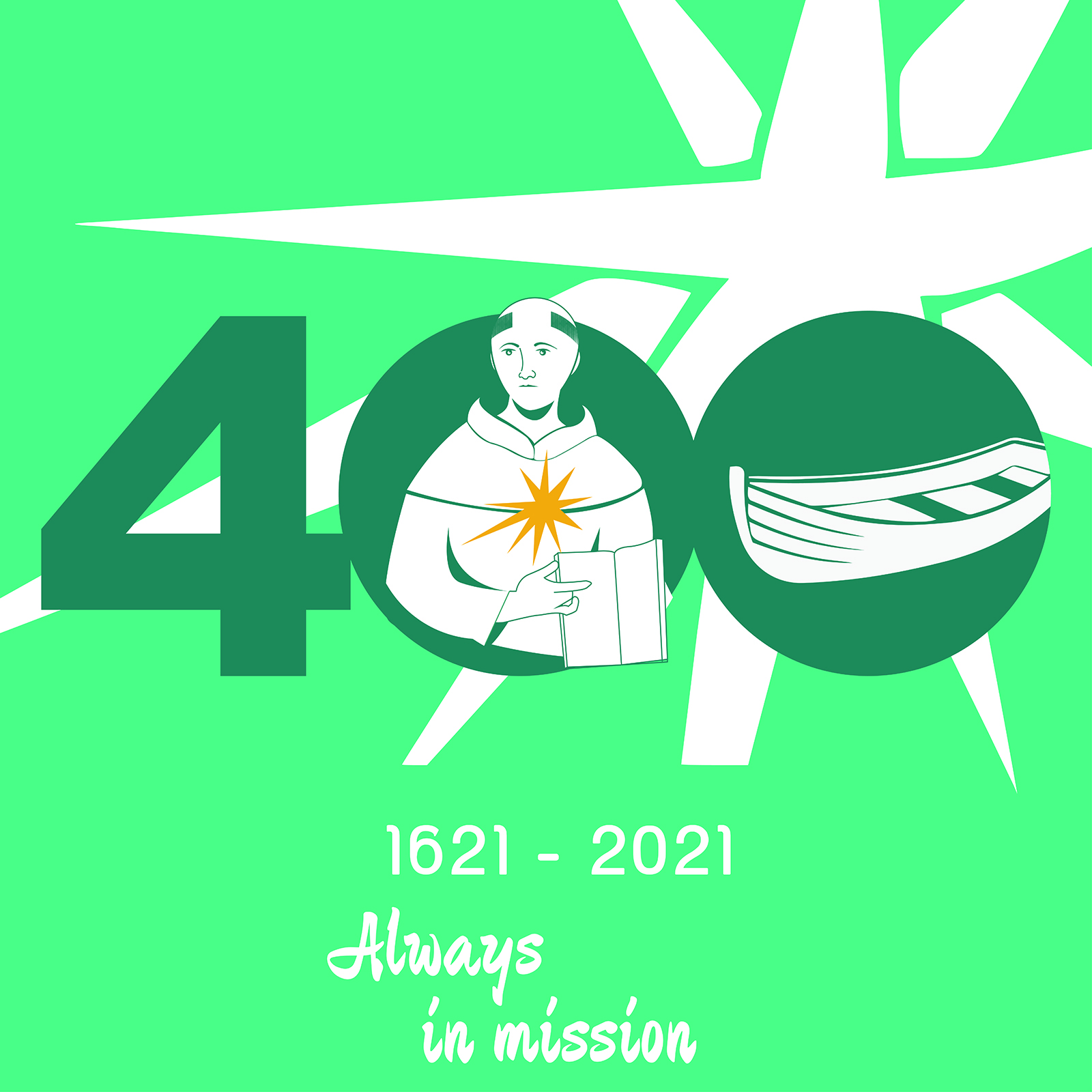 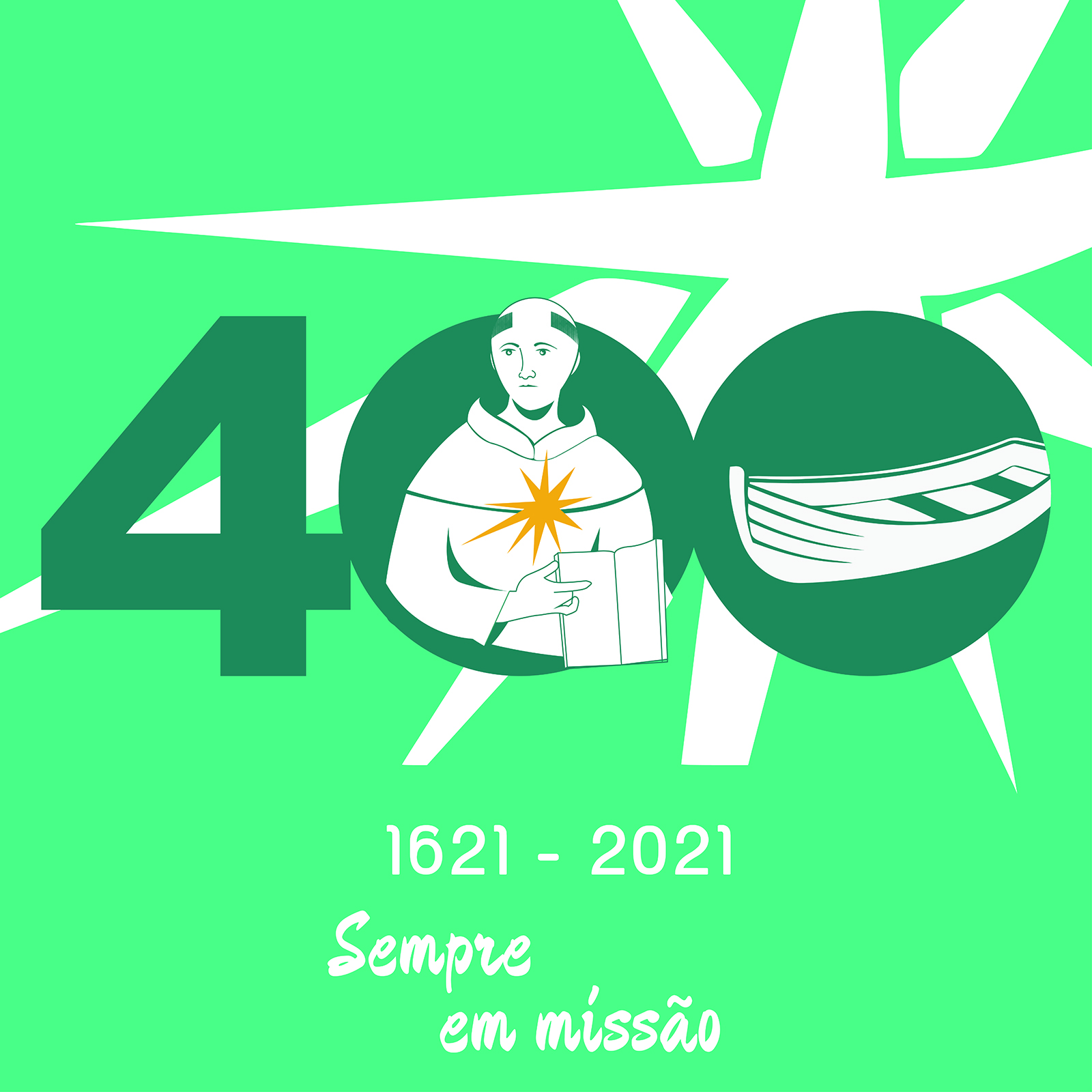 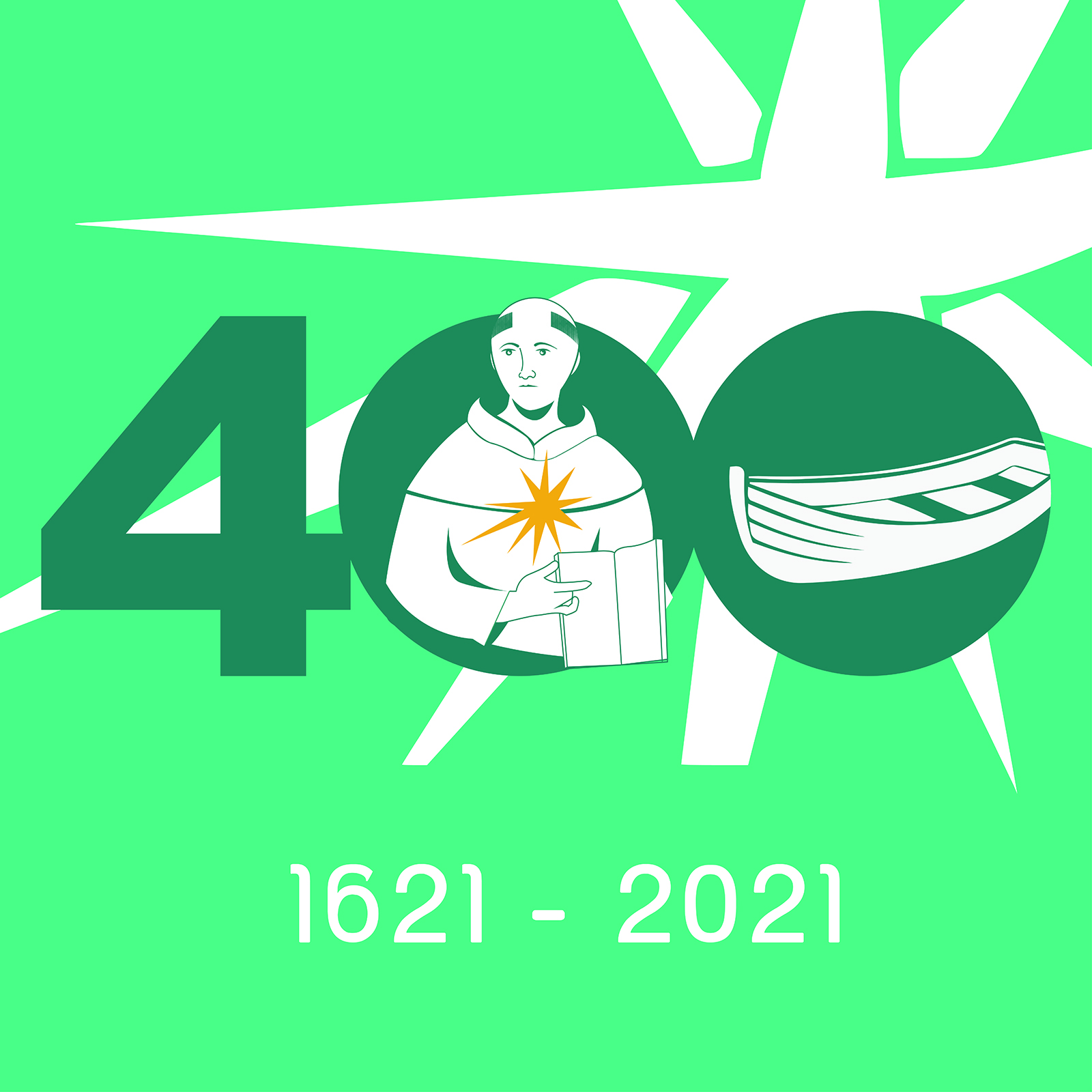 The Province of San Nicolás de Tolentino of the Order of Augustinians Recoletos is about to celebrate nothing less than its fourth centenary.  To blow 400 candles all you need is the breath of the ever-present Holy Spirit that can be like a light breeze or a powerful hurricane.

He was the one who moved the threads for St Augustine to propose a community lifestyle in his Rule, which has guided the lives of generations of consecrated men to this day.  In the thirteenth century the Augustinians were born as the result of the union of several congregations following that Rule, and in the sixteenth century, at the end, the Augustinian Recollect.

Within this Recollection, the Church asks some of her religious to devote all their efforts to missionary work in the Philippines. In 1621 these missionary communities were formed as  Province San Nicolás de Tolentino.

Nearly four hundred years later, we continue between the fleeting time that passes, or flies, as you look at; and the permanent, the charism, the values that have inspired the personal and community life of so many religious and lay people engaged in various ways.

The logo: A train that doesn't stop

Within the framework of the star of San Nicolás de Tolentino, which was already the logo of the religious province of the  Augustinian Recollects, heated by its light, then numbers of the figure that summons the celebration:  400..

In the first of its zeros is the figure of the saint, identified by his star and by the Gospel  that  overflows due to his concrete witness of life, incarnation of those evangelical values of the following of Christ according to the charism of St Augustine.

In the second zero is a boat, which takes us to the mission, to Peter and the others  who,  encouraged by the Master, overcome their fear, row out to sea, and go fishing  for men. Also, the boat was the main means of transport in the country of a thousand islands,  The Philippines, original mission of the Province that, 400 years later, is in so many seas and rivers of the world on three continents.

The motto, Always in Mission, completes it along with the year arc of the celebration,  that first glimpse where the green color predominates, color that already identified the Province in its logo and in its public communication.

The station is you.

Let’s propose a more graphic reading:  imagine that it is a train commanded by time, unable to stop: the machine is the four; and has its first two fixed cars, the zeros: San Nicolás and the mission.

Then, now out of focus, follow the rest of the  wagons, each dedicated to the different areas  of work, pastoral, mission, spiritual life and encounter with the society that Province has today: parishes, schools, social projects, centers of spirituality and permanent formation,  houses of initial formation, culture, social dialogue, centers of attention to the elderly...

These cars may vary, but they all walk together by the bond of mission, of being present wherever the Church wants.

So, where does this train stop? The stations are now on three continents, in hundreds of families, in those who are served, and the Gospel is served in the form of witness, of joy for a vocation, of following Christ. You, who read this, are one of the stations on that train.

In a hundred years the machine will be changed to a much more powerful one, the "five" one, the half millennium. The train of time does not stop and the star of St Nicholas will continue to shine as long as the breath of the Spirit keeps aboard the boat to those called to this mission, in this charism, religious and lay people engaged in the Secular Fraternities, in the Augustinian-Recollect Youth, in the spirituality and missionary support groups, in the close families of the religious, in the benefactors and friends.

Saint Nicholas of Tolentino: the fire of the Gospel and the surrender without measure

The patronage of San Nicolás de Tolentino, the first in time of the saints of the Augustinian Family, is chosen, because it clearly portrays the desire of those friars eager to consume the world for Christ.

The great message of Nicholas for those of us who will celebrate this anniversary is not in the dazzling miracle but in the daily beating of his heart, gathered according to the mold of Augustine of Hippo; that is: a simple, supportive heart, given to others without selfish calculations, seeker of the face of God in the eyes of those who suffer, builder of friendship...

Nicholas of Tolentino (1245-1305) understood that the language of attention, affection and closeness have the lastword, so that in order to become witnesses of the gospel we have to  seek together the essential, beyond appearances, as bonfires enlivened by the Gospel.

His star on his chest reminisces being lit and scorned by the light of the gospel and was able to put light amid the clouds of suffering. This anniversary is a propitious occasion to be stars, lit up with the gospel and bringing to the day the disparate evangelical proposal that Nicholas understood perfectly: the more is given and the less is received, the happier you are.

The boat: oceans to distant missions and offshore to the Inner Master

One of the decisions of the Chapter of Toledo of the Province of Castile of the Order of St. Augustine in which the Collection was born in 1588 required that the new recollect convents  always have a church open to the faithful, because not only was the gathering but also a careful attention to the people of God.

In 1606, just 18 years after the recollect was born, the first missionary expedition took place  to the Philippines. They wanted to respond to this mission entrusted by Christ and the Church  to bring the Gospel to unknown and inhospitable places, even if it that meant a thousand and one hardships.

The boat evokes the hard journey through two oceans where many left their lives, but at the same time pays homage to the evangelical courage of those who rowed without fading or discouragement in the face many difficulties.

It is the boat of those fishers of men who leave their skin sowing hope in the midst of so much nonsense; and also the boat of those who, following the Augustinian charism, "row out to sea" to meet the Inner Master, know themselves and drink from the restful silence and peace and then bear witness to the living Christ and defend the dignity of the children of God and his   Creation.

The motto: Always on a mission

No baptized person can renounce the mission: it is an inherent part of following Christ.

For their part, consecrated persons have chosen to dedicate their lives and to guide their ways so that hope and joy may broaden the horizons of those who live in the thousand faces of pain.

The Augustinians, and the members of the Province of San Nicolás de Tolentino  as consecrated since that Augustinian recollect charism, have been available for what the Church  needs.

And they try to imitate their patron saint, from whom they have learned that in every parish, school, social project, in community coexistence or in formation, they must laugh, cry, love, live, believe, dream, feel, grow, vibrate, in symphony of fraternity, with one soul and one heart.  That's how you're always on a mission.